The Most Memorable Moment Sunday? Pick One

Sunday’s NFC Championship game was rife with memorable moments and plays. Which play, or moment, stood out most for you? Vote here. 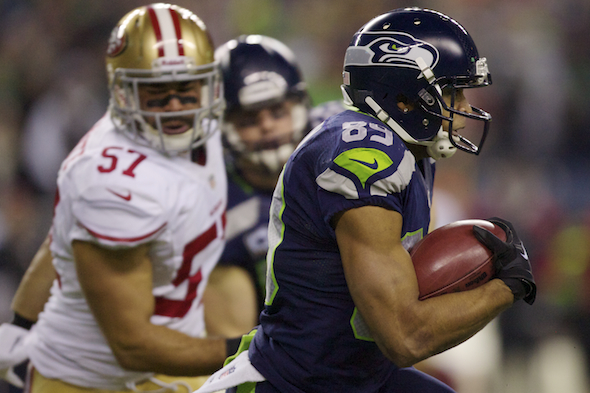 For once, a game lived up to its hype. The NFC Championship was sensational, brutal and mesmerizing, rife with big plays and controversies. The Seahawks looked like sure losers early when they fell into a 10-0 hole, unable to stop, much less contain, Colin Kaepernick. But the Seahawks won the second half, 20-7, and did something no team has done in 30 years.

They became the first club to rally for a win by forcing three turnovers (two interceptions, fumble) in the fourth quarter. The last to do it, according to Elias, was the New York Jets in a 17-14 victory over the San Diego Chargers in January, 1983.

Several plays saved the Seahawks’ 23-17 victory. Which of the many will remain most memorable for you?

Richard Sherman’s game-saving tip: Colin Kaepernick would be a San Francisco icon today if he’d been able to complete an 18-yard touchdown pass to Michael Crabtree in the corner of the end zone with 22 seconds to play. But Sherman made a CenturyLink leap that will become a fixture in the Seahawks’ highlight library — swatting it away, leading to Malcolm Smith’s clinching interception.

Russell Wilson’s 35-yard TD to Jermaine Kearse: When the Seahawks faced fourth and 7 from the SF 35 with 13:44 to play, the original idea was for Steven Hauschka to try to kick a field goal. But Pete Carroll called timeout and sent his offense back on the field. Wilson then threw an amazing touchdown to Jermaine Kearse — the throw couldn’t have been better nor the catch more dramatic — for what proved to be the game-winning points.

Marshawn Lynch’s 40-yard TD run: Lynch gained only 33 yards in the first half, but broke loose out of a pack at 9:51 of the third quarter and, with five 49ers in pursuit, won the race to the end zone, tying the game 10-10. Lync has four 100-yard rushing games in the postseason for Seattle, twice as many as any other running back (Shaun Alexander 2, Curt Warner 1, Dan Doornink 1).

Doug Baldwin’s 69-yard kickoff return: After Anquan Boldin out-jumped safety Earl Thomas for a 26-yard touchdown with 6:29 remaining in the third quarter to give San Francisco a 17-10 lead, Baldwin, who already had a 51-yard reception, returned the ensuing kickoff 69 yards, setting up Hauschka’s 40-yard field goal, cutting the 49ers lead to 17-13. That started a run of 13 straight Seattle points to close out the game.

Kam Chancellor’s sideline interception: The Seahawks led 20-17 in the fourth quarter when Kaepernick, who beat the Seahawks all game with his legs (130 rushing yards), tried to whip them with his arm. Terrible decision. He threw an out-route to Boldin near the left sideline and Chancellor stepped in front of him and picked it off. That led to a 47-yard Hauschka field goal, extending Seattle’s lead to 23-17.

Richard Sherman’s all-time post-game rant: Moments after his game-saving tip in the back of the end zone, Sherman tried to shake Michael Crabtree’s hand, but Crabtree shoved a hand into Sherman’s facemask. Sherman then went on Fox with Erin Andrews, declared himself the best corner in the NFL and trashed Crabtree, calling him “sorry” and “mediocre.”  This is a partial transcript, via Buzz Feed:

[Sherman:] “Well, I’m the best corner in the game! When you try me with a sorry receiver like Crabtree, that’s the result you gonna get! Don’t you EVER talk about me.”

[Andrews:] “Who was talking about you?”

[Sherman:] “Crabtree. Don’t you open your mouth about the best. Or I’m gonna shut it for you real quick. L-O-B (Legion of Boom).”