During his weekly meet with reporters, Seahawks CB Richard Sherman talked about the racist comments he received after his interview with Fox reporter Erin Andrews. 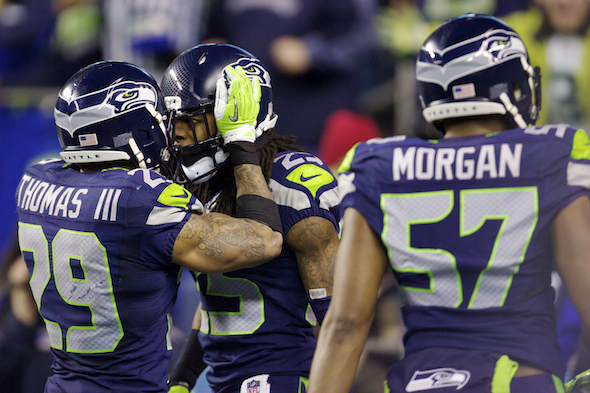 RENTON — In his first media appearance since Sunday’s NFC Championship, Seahawks CB Richard Sherman was his normal self Wednesday at team headquarters: Honest, funny and brash.

Sherman apologized for the controversy caused by his post-game rant with FOX reporter Erin Andrews following the Seahawks’ 23-17 win over the 49ers.

The backlash from the unhinged was immediate.

Some issued racist responses on social media sites like Twitter, which further thrust the Stanford graduate from Compton, CA., into the national spotlight.

“I’m really surprised by that. But if I really knew it was going to blow up like that I probably would have approached it differently, just in terms of the way it took away from my teammates’ great games,” Sherman said.

“A lot of people took it a little further than football.”

Sherman was called a thug. He responded to the accusation with a column published in Sports Illustrated’s Monday Morning Quarterback.

Wednesday Sherman explained why the label upset him.

“The only reason it bothers me is because it seems like the acceptable way of calling people the N-word nowadays,” Sherman said. “It’s like everyone else says the N-word, and then they say thug, and they’re like, ‘Oh, yeah, that’s fine.’ That’s kind of where it takes me back, and it’s kind of disappointing because they know.

“What’s the definition of a thug really?”

“There was a hockey game where they didn’t even play hockey, they just threw their sticks aside and started fighting,” Sherman said. “I saw that and said, ‘Ah man, — I’m the thug?’ What’s going on here? Jeez. So I’m really disappointed in being called a thug.

“I guess some people showed how far we’ve really come in this day and age. It was kind of profound what happened. People’s opinions and things of that nature because I was on a football field showing passion. Maybe it was misdirected. Maybe things may have been immature. Things could have been worded better. This is on a football field. I wasn’t committing any crimes or doing anything illegal.

“I was showing passion after a football game. I didn’t have time to sit there and contemplate what I’m going to say. The people who were behind computer screens typing had all the time in the world to contemplate everything they wanted to say and articulate it exactly like they wanted to. Some of it I’m sure they were pretty embarrassed about.”

“Richard Sherman has tremendous character,” he said. “He really does. He got fired up. I guess you could call it a mistake or whatever. I don’t know. It was just one of those things where he’s just so passionate about the game of football. I know that that’s not how he is on a regular basis, day in and day out. He’s one of the most intelligent people you’ll ever meet, and he can make all the plays.”