Walter Jones, a nine-time Pro Bowler who spent his entire career (1997-08) with the Seahawks, was elected to the Pro Football Hall of Fame Saturday afternoon. 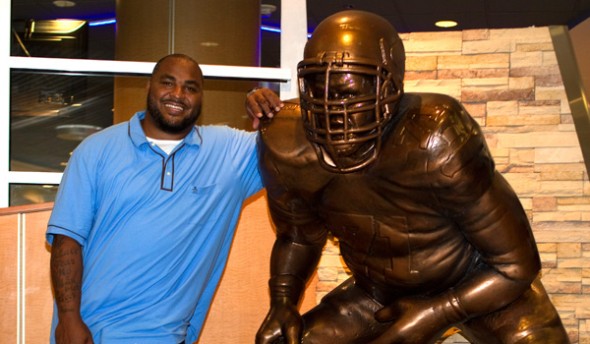 Walter Jones poses with a statute in his likeness at Sea-Tac Airport. / Corky Trewin, Seattle Seahawks

Selected by the Seahawks out of Florida State with the sixth overall pick in the 1997 NFL Draft, Walter Jones completed his professional football odyssey Saturday with his election to the Pro Football Hall of Fame. The 6-foot-5, 315-pound former left tackle joins wide receiver Steve Largent (1995) and defensive tackle Cortez Kennedy (2012) as the third longtime member of the franchise to cross the portals of Canton.

Like Largent, Jones made the Pro Football Hall of Fame in his first year of eligibility (Kennedy earned induction in his fourth). Jones becomes the 10th offensive lineman to achieve that distinction. Along with other members of the HOF Class of 2014, Jones will officially be enshrined in Canton Aug. 2.

Jones spent his entire career (1997-08) as a member of the Seahawks and protected nine different quarterbacks, from Warren Moon to Matt Hasselbeck, during that time. A snapshot of his achievements:

ACQUIRED: Selected in the first round (sixth overall)  of the 1997 NFL Draft.

The most decorated offensive lineman in Seahawks history, the 6-5, 315-pound Jones made nine Pro Bowl teams (franchise record) in his first 12 years with the franchise, becoming, virtually assuring his election the Pro Football Hall of Fame, which came Saturday.

In addition to being the first Seahawks’ lineman voted to play in the Pro Bowl, Jones was named first-team All-Pro by The Associated Press a franchise-record four times. He played a significant role in springing Shaun Alexander loose for more than 100 NFL touchdowns, and for helping quarterback Matt Hasselbeck earn three Pro Bowl invitations.

Jones played in 180 Seahawks games through 2008, starting every one of them. He failed to get on the field the following season due to an injured left knee, and was unable to rehabilitate to the point that he could play again. The Seahawks announced Jones’ retirement April 29, 2010, and immediately retired his No. 71 jersey.

Jones became the most dominant left tackle of his time. In 13 seasons, he was called for holding only nine times and in 5,703 pass attempts and surrendered just 23 sacks according to coaches statistics.

Seattle selected Jones with the sixth overall pick in the 1997 NFL Draft, which was acquired in a draft‐day trade with the Tamp a Bay Buccaneers in exchange for Seattle’s first‐round pick (#12, RB Warrick Dunn) and third‐round pick (#66, CB Ronde Barber).

Jones was named to his first Pro Bowl following the 1999 season, becoming the first Seattle offensive lineman to accomplish that feat.