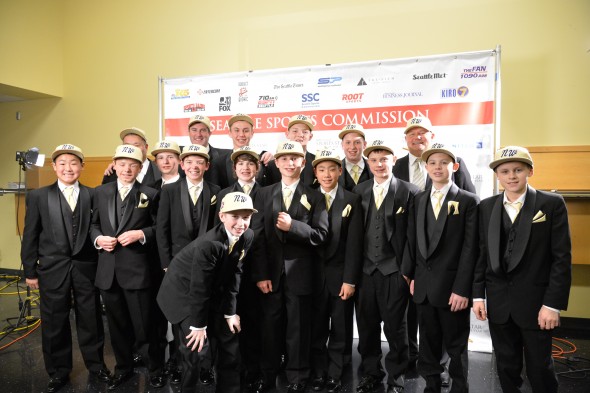 For a change, Russell Wilson didn’t have to scramble. Usually quarterbacks do at Seattle’s Sports Star of the Year event.

Between winning an NFC Championship at home and a coming Super Bowl trip to New Jersey — and already the toast of the town — the Seahawks’ Wilson was a logical choice, yet a rare quarterback winner in receiving the men’s Star award at the 79th annual awards show sponsored by MTR Western.

On Wednesday night at Benaroya Hall, volleyball player Krista Vansant, University of Washington outside hitter and NCAA player of the year, was the women’s Star selection. The upstart Eastlake baseball team, a serious Little League World Series contender, captured sports story of the year ahead of the Seahawks’ run to the Super Bowl.

With Super Bowl preparation foremost for him and his team these days, Wilson wasn’t in attendance at the event, which attracted 1,200 sports fans, athletes and dignitaries. He accepted his award in a video message.

“I want to say thank you to the Seattle Sports Commission and the 12th Man,” Wilson said. “It’s been an unbelievable year. We’ve got a lot more to do. One game left. I hope everybody in Seattle will be at the Super Bowl. Thank you very much for this honor — and go Hawks.”

Kenny Mayne, long-time ESPN personality and former Channel 11 sportscaster, hosted the event in his typical dry-wit fashion. He introduced soldiers from Joint Base Lewis-McChord. He introduced his blind nephew Troy Bellerud. Mayne also wore house slippers whenever he stood at the podium.

Wilson became just the second Seahawks quarterback to accept the long-running local award in the 39 years they’ve been eligible. Matt Hasselbeck won in 2003. Wilson was only the fifth QB overall saluted in the history of the event; others were then-UW seniors Warren Moon, Marques Tuiasosopo and Jake Locker.

Described as another Fran Tarkenton, the elusive Wilson has played just two pro seasons, leading the Seahawks deep into the playoffs each time. He has Seattle in its second Super Bowl, reaching for an NFL championship against Peyton Manning and the Denver Broncos.

Vansant became the UW’s highest decorated volleyball player, the first chosen national player of the year. She helped the Huskies advance to the Final Four. She was a first-team All-America choice and Pac-12 player of the year. And she’s only a junior.

The 6-foot-2 California native kept her speech short. The reason? She had a weight lifting session the following morning at 7:30 a.m.

“We’re trying to get better and get back to the Final Four and win a national championship,” Vansant explained.

Eastlake players and coaches were smartly dressed in identical blue suits and baseball hats when they took the stage to receive the story of the year award. They were honored for their dramatic run through Williamsport, PA, one that ended with a 14-13 World Series defeat to Westport, CN., in extra innings, leaving them third in the nation.

“These kids are absolutely unbelievable,” Eastlake coach Bob Chandler said, before introducing each member and then leading them in a cheer for the Seahawks. “It was an amazing ride.”

Lystedt, who suffered a serious brain injury in 2006 while playing junior high school football, received the Seattle Children’s Hospital Inspirational Award.  His perseverance during his recovery inspired the state Legislature to pass the Lystedt law, which calls for player-safety rules.

Accompanied to the podium by his parents, the Tahoma High School graduate was upbeat and funny as he told his story.

“Prior to my injury, sports and girls were all I’ve thought about,” Lystedt said. “Since my injury, nothing at all has changed.”

Miller, whose name is forever connected to spectacular skiing and snowboarding films, accepted the Keith Jackson Award, given to a member of the media for excellence in local communications.

Legendary cyclist Greg LeMond was one those who introduced the legendary filmmaker, who turns 90 this year and lives on Orcas Island. Miller was gracious during his Benaroya moment.

“One of the things I’m most proud of is you supported me all of these years,” he said. “I spent my whole life walking into empty theaters and setting up my projector and watching people fill up the theater.”

Crockett, a UW alum and one of the school’s largest donors, received the Paul Allen Award, given to a person who has made a meaningful local philanthropic contribution. He was a key figure in raising $50 million necessary to renovate Husky Stadium, which re-opened this past season.

Crocket, who built and opened Emerald Downs race track in 1996, in effect saving the horse-racing industry in the state, told how he came from modest means and became a successful businessman. He mentioned how he obtained his college degree with the financial backing of UW alum Jim McCurdy, an early Sports Star winner himself, and created an airplane maintenance company.

Former UW basketball player Quincy Pondexter, his NBA season over because of injury, showed up on crutches to pay homage to Crockett, who was one of his college supporters.

Brayton was ill and unable to attend the banquet, but had WSU athletic director Bill Moos and others accept the award on his behalf. Moos did so while suffering from a cold.