With the Super Bowl nine days away, the Seahawks arguably are nearer to 100 percent than they have been at any point in the 2013 season. 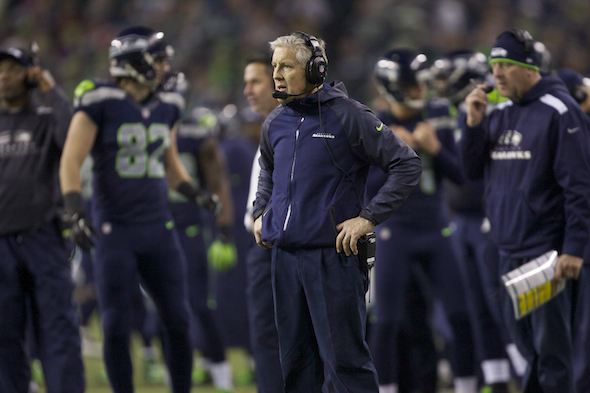 Seahawks coach Pete Carroll said Friday that he has never been to to the Super Bowl as either a fan or a coach. / Drew Sellers, Sportspress Northwest

RENTON — Richard Sherman’s notorious outburst on national TV went unpunished by the NFL, but his taunting foul that preceded it cost him $7,875. Before Seattle fans get upset, that was automatic — the standard NFL fine for unsportsmanlike conduct.

Sherman’s deflection in the final minute of a potential touchdown pass saved the Seahawks in the NFC Championship game. But a few moments later, his tirade against San Francisco’s Michael Crabtree made him a national talking point. In between, he flashed the choke sign to 49ers QB Colin Kaepernick — he made turnovers on the 49ers final three possessions — which is virtually a mandatory penalty call.

Healthy as a team can expect

The Seahawks will have healthy their full complement of players when they kickoff Super Bowl XLVIII Sunday, Feb. 2 at MetLife Stadium. Wide receiver Percy Harvin, who missed the NFC Championship with a concussion and most of the season while recovering from hip surgery, practiced without limitations Wednesday, Thursday and Friday.

During the regular season, Harvin’s hip would swell up and become sore the day after he ran. That problem is behind him and so are the effects of the concussion he sustained in the first half of the NFC Championship. Carroll said Harvin will play without limitations, which means he’ll return kickoffs against the Broncos as well.

“He did great,” Carroll said of Harvin’s latest week of practice. “He looked like he was full speed, 100 percent the whole time. He had no problem. He looks like he’s ready to go. There will be no hesitation.”

Linebacker K.J. Wright, who played in the NFC Championship but wasn’t fully ready after breaking a bone in his foot Dec. 8, is closer to 100 percent, Carroll said Friday following Seattle’s final practice before they fly to New Jersey Sunday. Wright sat out Friday, but Carroll expects him to start against the Broncos in place of backup Malcolm Smith.

“We’ve put him up against a lot of really good players, and he’s matched up with all of them, so we have no problem continuing to count on that,” Carroll said. “He’s really got all of the tools, and he has the addition of having the real good length. His arm length is really a factor in how he covers guys.”

Meanwhile, running back Marshawn Lynch and wide receiver Doug Baldwin didn’t practice this week, but both are listed as probable and will be ready for the Super Bowl, Carroll said. Even defensive tackle Brandon Mebane, who sat Thursday’s practice with a sore ankle, was back Friday as a limited participant.

Except for injured wide receiver Sidney Rice and suspended cornerback Brandon Browner, the Seahawks are as close as they have been all season to full strength with arguably the biggest game in franchise history less than 10 days away.

After playing well when given a surprise start in the NFC divisional round, rookie left guard Michael Bowie was expected to start the NFC Championship against San Francisco.

A few hours before Seattle’s 23-17 win over the Niners, the Seahawks announced that Bowie would be inactive. Former first-round pick James Carpenter started in his stead, rotating with veteran Paul McQuistan.

Friday Carroll intimated that the Seahawks will likely stick with the Carpenter-McQuistan platoon against Denver.

“We like the way it went last week,” Carroll said. “It’s more likely to be like that than it was a couple weeks ago.”

Super Bowl forecast is mild, but could change

Seahawks fans can commence repeatedly checking their weather apps on their smartphones. The Super Bowl is less than 10 days away, which means relatively informed predictions from “licensed” meteorologists will be thrust into the national spotlight.

As of Friday afternoon, the 10-day forecast for East Rutherford, NJ showed for Feb. 2 a mix of rain and snow showers, with a high of 35 degrees, a low of 25 and a 60 percent chance of precipitation. NFL commissioner Roger Goodell, who earned $29.49 million in 2011, and is the only U.S. sports commissioner  to make more than the highest-paid player in his league, will choose to sit outside and mingle with the proletariat rather than enjoy MetLife Stadium’s suites.

Carroll wasn’t buying into reports that the NFL would move the game to Monday to accommodate for extreme winter.

The club announced Friday that fans are invited to stand at 10:30 a.m. Sunday along the the 1.1 mile route that runs from SeaTac’s South 188th Street between 46th Avenue and 28th Avenue to cheer on the team as it departs for New Jersey.