Rock musicians Jerry Cantrell and Duff McKagan toured Europe in the fall, but the Seattle lifers made sure the party was on whenever the Seahawks played. 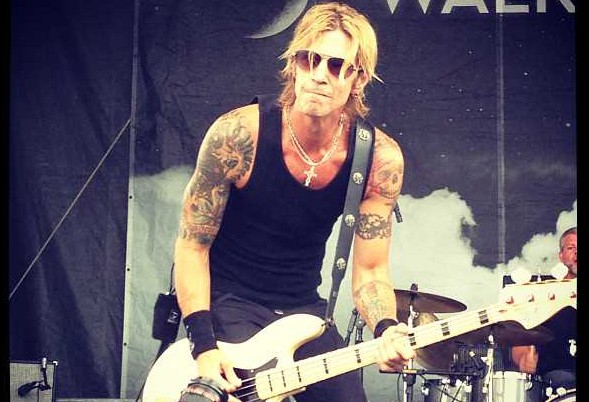 Duff McKagan, along with fellow Seattle rock star Jerry Cantrell, are off to the Big Apple to hail their favorite team in the Super Bowl.

It was almost 11 a.m. and the party on the tour bus was in full roar. Two veterans of the rock and roll highway held court, traded barbs, and laughed as they passed time between shows on a tour.

Care had been taken to make sure both had exactly what he wanted for the party. The atmosphere on board was festive and loose. But if an outsider stuck his head in the door to see what all the noise was about, he might have been surprised.

Because it wasn’t 11 p.m. but 11 a.m, the usual accoutrements one might associate with rock and roll debauchery were nowhere to be found. This was 2013, not 1993. The party on Alice in Chains guitarist Jerry Cantrell’s tour bus was to celebrate the opening day of the NFL season, which happened to fall in the middle of the Uproar Tour.

The duo powered through cups of coffee and plates of fresh fruit. Or, at least one of them did.

“Jerry eats like a 15-year-old,” McKagan said. “Oreos and pretzels. That’s the stuff he eats.” McKagan laughed when it was pointed out that had this party taken place in 1993, the scene on the bus would have been different, likely involving more than Oreos and pretzels.

“We would have still been watching the game,” McKagan said, “but I guarantee you we would have been on a three-day run. If you were to walk in on us, you would have left, probably a little frightened. If you had walked in on us this year, you would have said ‘Hey, it’s a football party.’”

McKagan and Cantrell are attending Super Bowl XLVIII together, which is appropriate because they watched so many games this season as their bands crossed America and Europe playing live shows. The NFL Network has a feature on the pair that will air Monday morning.

McKagan remembers watching one Seahawks night game at “three in the morning as our bus drove through England. The signal on the computer kept freezing up because the bus was moving. But that’s part of the adventure.”

The Seahawks have been part of the adventure for McKagan since he was a kid.

“My Gil Dobie Little League football team played a game at halftime of a Hawks game at the Kingdome,” he said.  A 12-year-old, he was a defensive end and linebacker on a team that made up for a lack of size with a tough attitude.

“We were small, but we had great coaches who taught us a lot about suffering,” he said. “We’d practice in the summer with no water. You had to earn your water. They taught us how to grab the opponent’s facemask really quick when the ref’s head was turned, and how to sneak in a little sock in the jaw . . . a little uppercut.”

One of McKagan’s teammates at the time was Hugh Millen. It’s possible that during a Gil Dobie league practice in 1976, a 12-year-old Millen was discussing strengths and weaknesses of the 3-4 defense compared to the 4-3 defense, while 12-year-old Duff McKagan was working out the chords to “Welcome to the Jungle” in his head.

Millen would go on to a football scholarship at the University of Washington and 11 years in the NFL, while McKagan made the major leagues of rock with Guns N Roses, where his life went almost off the rails in the early ’90s. During that time, he said the Seahawks often provided him with a small light at the end of a dark tunnel in which he was stuck.

“I knew the Seahawks were playing every Sunday at one,” he said. “It was an anchor. It was something that was real and many times it was the only thing that was real. It may sound goofy or funny, but it was the truth. It mattered that they were there. It didn’t matter if they were good or not. They were MY football team. I’m from Seattle.”

McKagan and Cantrell met in 1989 and have been friends since. They beat the demons of alcohol and drugs that tend to stalk young musicians, and focus much of their attention these days on football. For several years, Cantrell has organized a rock-star fantasy football league.

The league is set up as a charity fundraiser with all fees going into a pot that is distributed to the winner’s favorite charity. McKagan says he’s in the league mainly for the charity component and views the entire process with bemused indifference.

“It’s just so nerdy,” he said, laughing. “I always want to draft all Seattle guys but I’ve learned that you need guys from other teams. I also learned that on bye weeks you should switch your players. That’ll win you more games.”

The pair was in Detroit in 2006 for Super Bowl XL. It’s a trip best remembered by McKagan for a disturbing revelation at the start of the journey. They met at the airport to fly together. McKagan was there first when he spotted Cantrell walking toward him.

“I see a guy with long hair and the Hawks’ colors and I’m like,  ‘Oh, there he is.’ I get closer and he’s wearing Steelers gloves. I thought he was just messing with me. I’m like, ‘Take that crap off,’ and he gets all serious and says ‘There’s this one thing I’ve never been able to tell you. I’m also a Steelers fan.’”

The NFL has done research that concludes most people pick a favorite pro football team before turning 10. Cantrell was born in 1966, before the Seahawks existed. He liked the Steelers. When the Hawks arrived in 1976 he liked them, too, but never saw a reason to abandon his first love. McKagan was unimpressed.

“I’m like, ‘What are you talking about, dude?’ He was torn the whole trip. He said it was the most confusing thing.”

There’s no confusion this time. They will be in MetLife Stadium for the game. McKagan is positive Cantrell is not going to suddenly announce that he’s always liked the Broncos: “This one is pure Hawks.”