Super Bowl XLVIII will feature the top-scoring offense (Denver) vs. the No. 1 defense (Seattle). In six previous such SB matchups, the top defense won five times. 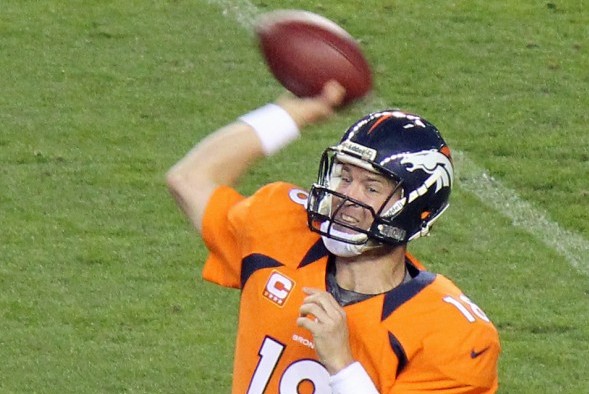 Peyton Manning’s Denver Broncos scored an average of 37.9 points per game during the regular season and will be the highest-scoring team to reach the Super Bowl. / Wiki Commons

No NFL team scored as many regular-season points (606) or gained as many yards (6,317) as the Denver Broncos. No team allowed fewer points (213) or yards (4,378) as the Seattle Seahawks. No teams won as many games this season as the Broncos or Seahawks.

When the AFC champions (15-3) and NFC titlists (15-3) clash Sunday at MetLife Stadium in East Rutherford, NJ., it will mark only the second pairing of No. 1 seeds in the Super Bowl in the last 20 years and the first since 1991 to pit the highest-scoring team in the regular season against the team that was scored upon the least.

Who wins such matchups? Before delving into that, let’s examine some research provided by Chase Stuart of Football Perspective.com.

Stuart arrived at his “greatest disparity” conclusion by examining the offensive and defensive stats of all 96 Super Bowl teams. He found that in only two Super Bowls was there a disparity of at least 20 points.

The second-greatest gap between offenses and defenses was in Super Bowl I (1967) when the NFL’s Green Bay Packers played the American Football League’s Kansas City Chiefs.

Although in different leagues (the NFL and AFL didn’t merge until 1970), the Chiefs came in with the AFL’s No. 1 scoring offense at 32.0 points per game, while the Packers featured the NFL’s No. 1 defense, allowing 11.6. The 20.4 difference is less than the margin between Denver and Seattle (Green Bay won 35-10).

Stuart confined his research strictly to the difference between scoring offenses and scoring defenses, leaving for another day the task of offering commentary on which units prevailed most often.

Turns out, in the 10 Super Bowls with the largest statistical disparities between offenses and defenses, the defensive unit won eight:

Whether the trend of defenses prevailing continues in Super Bowl XLVIII depends on Seattle’s ability to force turnovers, and the degree to which the Seahawks can keep Manning off the field.

Sunday’s Super Bowl will be the sixth to feature the league’s No. 1 offense vs. its No. 1 defense. The last time, in 1991, was when Buffalo Bills brought to Tampa Stadium an offense averaging 28.6 points behind quarterback Jim Kelly to face a New York Giants defense that allowed 13.2.

Lawrence Taylor’s Giants won, barely, 20-19, continuing a trend. In the five previous Super Bowls that featured a No. 1 offense vs. a No. 1 defense, the defense prevailed every time but once, 1989, when Joe Montana threw five touchdown passes, three to Jerry Rice, in a 55-10 win over John Elway’s Denver Broncos. No. 1 offense vs. No. 1 defense in the Super Bowl:

The Broncos are the highest-scoring team to reach the Super Bowl, eclipsing by a point the 2007 New England Patriots (36.8) who had a 16-0 regular-season record. But the Patriots scored only 14 points in a 17-14 loss to Eli Manning and the Giants on Super Sunday.

A dozen teams that averaged 30 or more points in the regular season have played in the Super Bowl. Seven lost, most recently the 2011 Patriots, who didn’t come close to their 32.1 average in a 21-17 loss, also to Manning’s Giants.

While No. 1 defenses have had more success in the Super Bowl than No. 1 offenses, the team with the best rushing offense usually has the advantage. In 47 previous Super Bowls, the team that won the rushing battle won the game 37 times.

The Seahawks allowed 101.6 rushing yards per game this season. The Broncos? Also 101.6.