Russell Wilson of the Seahawks was somewhat rattled in the fourth quarter of the NFC title game against San Francisco and now takes his game to football’s biggest stage. 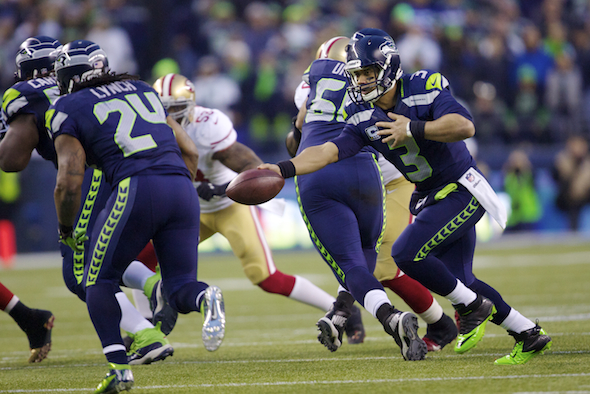 Russell Wilson, handing off to Marshawn Lynch in the NFC title game, has a chance to become the third-youngest quarterback to win the Super Bowl. / Drew Sellers, Sportspress Northwest

Perhaps the most remarkable aspect of Russell Wilson’s two-year tenure as quarterback of the Seahawks is the unflappable manner in which he has gone about his business. While Wilson has said often that he refuses to let his emotions get the better of him, regardless of circumstance, he seemed to get the jitters in the fourth quarter of the NFC Championship game.

Seattle’s offensive coordinator, Darrell Bevell, confirmed that was the case prior to the Seahawks’ departure for New York/New Jersey for Super Bowl XLVIII. Asked if Wilson finally displayed “nerves,” Bevell, in a roundabout way, said yes.

“There was definitely something,” Bevell said. “When you look at him or you talk to him, I don’t know if it was nerves, but obviously we didn’t function well in those situations. We fumbled on fourth-and one, and then we fumbled another snap, then we came out the wrong way.

“There were a number of things late in the last 10-15 plays where we didn’t function as well as we needed to. I’m not putting it all on him because there were other things going on, but we’re still talking about a second-year player and that’s the first time he has been in that situation.”

Wilson controlled his emotions enough that he was able to thread a beautiful 35-yard touchdown pass to Jermaine Kearse that provided the Seahawks with the winning points in a 23-17 victory over the 49ers.

The question is whether Wilson can avoid the creeps when he assumes football’s largest stage. As Bevell said, Wilson has done a lot of remarkable things, but he’s still a second-year player who will be 25 years, 65 days old on Super Sunday. No telling how he’ll react to the pressure. But if Wilson wins, he will become the third-youngest starting quarterback to claim an NFL title.

Of the four, only Namath, winner of Super Bowl III, did not go on to claim multiple Super Bowl titles, Montana ultimately quarterbacking four, Brady three and Roethlisberger two, the first (following the 2005 season) at Seattle’s expense. Montana and Namath are already in the Hall of Fame and Brady and Roethlisberger will be one day.

On Sunday, Wilson becomes the sixth member of an elite club of quarterbacks to start a Super Bowl in his first or second year in the NFL. Three of the five who did it came away Super Bowl winners while two, Dan Marino following the 1984 season and Colin Kaepernick last year, did not.

The question was put to Bevell: “Is there a game that’s too big for Russell Wilson?” Bevell’s response marked the first time that hesitation crept into an answer from a Seattle coach about the Seahawks quarterback.

“I think we need to keep that in mind,” he said. “We’re working with a second-year player. He’s fabulous in everything that we’ve asked him to do. He does a great job of managing all of the situations, and he’s come up big in just about every one of those for us.

“We don’t want to push the limit and push it over and ask him to do too much and have that show up in his play or anything. We haven’t done that. I don’t know if you could do that to him because he is so well prepared and he puts so much pressure on himself to do the right things all of the time. But he’s showed up big in all of the situations for us.”

But make no mistake: The next situation is different.