Fan who helped save Seahawks will cheer for 2

Mark Collins is neither lawyer nor politician, but he did much heavy lifting to keep the Seahawks in Seattle. He continues to bear the burden of the loss of another fan, his wife Jen. 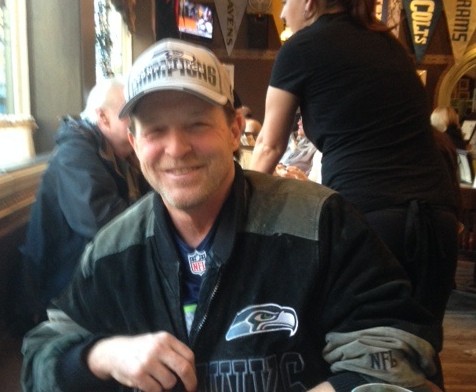 Mark Collins is a Seahawks fan who spent a lot of time and money helping keep the team in Seattle in 1996. / Mike Gastineau

Super Bowl Sunday happens to fall on Feb. 2. If the Seahawks defeat Denver and win the franchise’s first NFL championship, there’s no doubt Groundhog Day will forever be thought of as the biggest day in Seahawks history. It also would put a bookend of sorts on a story that started on another Groundhog Day 18 years ago.

Feb. 2, 1996 was the day then-Seahawks owner Ken Behring announced he was moving the team to Southern California. That he would ultimately be unsuccessful is owed to many things, including an already formed grassroots fan group called Save Our Seahawks (SOS) that would become a permanent pain in Behring’s backside.

Seattle native Mark Collins started the organization in December 1995 after several media reports indicated Behring was going to try to move the team. Collins publicly vowed to fight Behring, on behalf of the fans, every step of the way.  If Behring had any doubt about Collins’ tenacity, all he needed to do was ask someone who knows him. Or ask Collins himself.

“Would a sane man have done it?” Collins bellows almost two decades later, laughing. “Probably not. But the thing about me is that if I say I’m gonna do something, I’m gonna do it. The more people that say I can’t, well, that’s like a challenge to me. And the last thing you wanna do is challenge me.”

By the time Behring announced his intentions, Collins had the wheels in motion for a class action lawsuit on behalf of fans against the Seahawks. The suit was filed four days after Behring said he was leaving town. From that point, Collins became a zealot. He took out a mortgage on a house he already owned. He ran up credit card debt and took huge chunks of time off work.

“I was trying to fight for the fans,” he said. “I was fighting for their interest. I was able to be a voice for the fans when the fans needed one.”

Today, in a time when thousands of fans will line roads to the airport simply to wave to the team buses as they drive by for a flight to New York City, this sounds like a fun job. But things were very different in Seattle in 1996.

The Hawks weren’t very good on the field and struggled to sell tickets at the Kingdome. The sports landscape in Seattle was dominated by the Mariners and the Sonics. The Seahawks were a weak fourth, behind Washington football, in terms of fan interest. Collins was ceaselessly beating the drum to save a team that many fans were no better than lukewarm about.

But on he went, organizing and attending rallies, pestering local media for air time and ink, and getting sly winks on the side from some of Behring’s Seahawks lieutenants who wanted the franchise to stay in Seattle. “I was suing them,” he says, “and they would pull me aside at rallies and say, ‘Keep doing what you’re doing.’”

Collins is not a polished professional public figure. He dropped out of high school and makes his living as a contractor. He’s a blue-collar guy who spends free time playing drums in a country music band. He suddenly found himself in meetings with major players on all sides of the Seahawks story. His blunt demeanor in those meetings often caused concern.

“If you knew what I know,” he said, “there would be more than tea in the bay. I’d have something ready to go in a press release and the PR people would say, ‘You can’t say that!’ And I’d say, ‘Why? It’s the truth, isn’t it?’” He recalls saying things in a meeting, then in the silence that followed, think to himself,  “Whoops.”

Collins and his friends ultimately were on the right side of history. When Paul Allen in 1997 agreed to buy the franchise from Behring, they celebrated with the rest of the city. The victory gave him time to get his life back in order and pursue his two passions: The Seahawks and his soon-to-be wife, Jen.

The two met before Collins led the SOS fight. Jennifer helped him throughout the process. They dated for several years. Although he was crazy about her, he didn’t want to get married.

“I’m a devout bachelor,” he says. “I grew up watching “Sea Hunt.” I wanted to be Lloyd Bridges. I wanted to go scuba diving.”

He finally caved on New Year’s Eve 2000. The couple was married a few weeks later in Reno. They settled into a nice life, Collins working as a contractor and Jen working as a bookkeeper for a restaurant. Their social life revolved around his country music band and the Seahawks.

In 2004, Jen was diagnosed with lung cancer. She was strong-willed and with a positive attitude. It helped for a while. But by the time the Seahawks played Carolina in the NFC championship in January 2006, doctors told her it wouldn’t be safe for her to sit outside for a football game. Friends intervened, and Mark and Jen were able to watch the game (on her 36th birthday) together in a luxury suite. It was Jen’s last Seahawks game.

Traveling to Detroit for that year’s Super Bowl was out of the question for Jen, and something Mark says he never considered. “She told me to go, but there was no way,” he says. The team his organization had helped save was playing in the ultimate game, and he would miss it to stay with his wife.

Jen Collins died later in 2006. Mark still carries a torch for the love of his life.

“A lot of people ask why I haven’t gotten on with things,” he said.“It’s not that I haven’t dated. But nobody can fill her shoes.”

That may be true. But someone can wear her jacket. That someone is Mark Collins. He’s going to Super Bowl XLVIII, and plans on wearing what he wears to every game: Jen’s old Seahawks jacket.

Bad luck in the ticket draw left Collins with a not-so-choice seat. He will sit in the last row of the upper deck of the end zone. He’ll be in the stadium, but he’ll be as far away as you can get from the team he loves. He’ll also be closer to the woman he still loves, who helped him and others save the Seahawks.

“During the fourth quarter of the San Francisco game, I looked up to the sky and said, ‘If you got anything left, girlfriend, please bring it now.’ I know she’s up there rooting us on. To take her coat to the game . . . she finally gets to go to the Super Bowl. I’m gonna yell and scream for both of us. It feels like it’s bringing things full circle.”