Seahawks vs. Broncos: A rivalry scrapbook 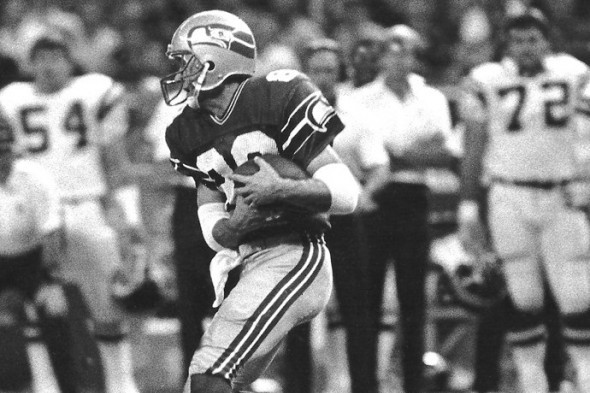 Steve Largent caught 100 passes during his career against the Denver Broncos, including 12 for 191 yards at Mile High Stadium in 1984. / David Eskenazi Collection

The Seahawks and Denver Broncos, entrants in Super Bowl XLVIII Sunday at MetLife Stadium, faced each other 53 times since their first official squabble Oct. 2, 1977, including 52 times in regular-season play and once in the playoffs (Dec. 24, 1983). The first 50 were when Seattle was a member of the AFC West (1977-01).

Denver holds the series lead, 34-18, and the Seahawks won the only postseason game. While the Broncos sport a huge edge in wins, the games have been remarkably close. Thirty of the 53 have been decided by a touchdown or less and a dozen by three or fewer points.

Denver’s best vs. Seattle: Elway had a 20-10 record, threw for 7,013 yards and 44 touchdowns. Honorble mention: In seven starts against the Seahawks, RB Terrell Davis rushed for 1,021 yards and popped two 50-yard runs.

First meeting: Oct. 2, 1977: Seattle backup quarterback Steve Myer made the only start of his career, replacing the injured Jim Zorn, and threw a seven-yard touchdown pass to TE Ron Howard. But the Broncos parlayed three turnovers and a 47-yard Craig Morton touchdown to Rob Lytle to beat the Seahawks 24-13. For Seattle, the highlight was a 43-yard TD pass from RB David Sims to Largent.

Seahawks’ original 12th Man, Oct. 29, 1978. When Denver PK Jim Turner missed an 18-yard chip shot in overtime, the Seahawks thought they had averted a loss. Instead, they were penalized for having 12 men – DE Dave Kraayeveld being the extra party – on the field, allowing Turner a re-take. He drilled it, giving the Broncos a 20-17 victory.

Mile High meltdown, Sept. 23, 1979: The Seahawks held a 34-10 lead in the third quarter following a one-yard run by Sherman Smith. But Morton threw three touchdown passes in the final 13 minutes and Lytle scored on a one-yard run as the Broncos came from 24 points down to win 37-34.

The playoff game, Dec. 24, 1983: The Seahawks made their NFL playoff debut a spectacular one, demolishing the Broncos 31-7. Dave Krieg triggered the victory, completing 12 of 13 passes, including his last 10 in a row, for 200 yards and three touchdowns. The Seahawks also created three turnovers, interceptions by Kerry Justin and Paul Moyer and a forced fumble by Shelton Robinson. “It’s hard to beat anybody when they execute the way Seattle did,” Denver coach Dan Reeves said. “We played a team that made no mistakes.”

Best start to a game, Nov. 25, 1984: On the first scrimmage play, Krieg launched an 80-yard touchdown pass to Daryl Turner. The Seahawks went on to a 27-24 victory. Krieg went on to post the second-best passing total of his career, 406 yards, 191 to Largent.

Brian Bosworth’s T-shirt Scam, 1987. In the days before his first NFL game at Mile High Stadium, Bosworth told reporters he was looking forward to playing against Elway, whom he repeatedly characterized as “Mr. Ed,” the horse of 1960s sitcom fame. Said Bosworth: “You very rarely get a chance to get a shot on somebody like that. I’m going to take as many hard shots as I can get on him.” Asked if wanted to hurt Elway, Bosworth replied, “Yeah, that’s just the way I approach the game. It might cost us 15 yards for roughing, but I’m not going to pull off on him.” Having enraged Denver fans with his trash talk, Bosworth (and his agent) secretly printed up hundreds of “Boz-Buster” T-shirts bearing his image, and made a tidy sum selling them to duped Broncos’ fans.

Steve Largent’s payback, Dec. 11, 1988. On Sept. 4, during the Seahawks’ season opener at Mile High Stadium, Largent ran a pass route over the middle only to get crushed by Broncos safety Mike Harden, who delivered an illegal forearm smash that caved in Largent’s facemask, dislodged a couple of his teeth and knocked him unconscious. The NFL fined Harden $5,000.

Fast forward to Week 15 for the Denver-Seattle rematch at the Kingdome. Early in the first half, Harden picked off a Krieg pass and began running it back. As he moved from the middle of the field toward the left sideline, Harden had his eyes fixed ahead and was, apparently, the only person in the Kingdome who did not see Largent streaking across the field, bearing down on him. In a moment that still delights Seahawks fans, Largent’s blindside blast lifted Harden off his feet, forcing a fumble that Largent recovered. The play brought everyone in the Kingdome, save Harden, to their feet. For years afterward, NFL Films featured the play among its all-time greatest hits.

The Pete Gross game, Nov. 30, 1992: The Seahawks inducted the popular broadcaster, days away from losing his battle with cancer, into the club’s Ring of Honor, as a prelude to a 16-13 Monday Night victory over the Broncos. Stan Gelbaugh connected with Brian Blades with a 3-yard TD pass on the game’s final play and John Kasay booted a 32-yard field goal 11:10 into overtime. At 71 minutes, 10 seconds, it’s the second-longest game in franchise history.

The 20-point comeback, Dec. 10, 1995: John Friesz came off the bench to engineer three fourth-quarter touchdown drives as the Seahawks rallied from a 20-0 deficit to win at Mile High 31-27. The 20-point comeback was, at the time, the largest in franchise history, and negated a tremendous performance by Denver’s Glyn Milburn, who broke a 34-year-old NFL record with 404 all-purpose yards.

The Glenn Cadrez fumble return, Dec. 19, 1999: Seattle QB Jon Kitna had the Seahawks on the move at Mile High, hoping for a field goal and a 33-30 overtime victory. Sending out five receivers, Kitna dropped back to pass, only to be smashed in the chest by Ray Crockett. The ball bounced loose and into the arms of Glenn Cadrez, who returned it 37 yards to the game-winning touchdown, the only TD of his 11-year NFL career.

An improbable rally, Dec. 3, 2006: At halftime, PK Josh Brown missed from 40 and 53 yards, Matt Hasselbeck had thrown for only 39, Shaun Alexander had run for 15 and the Seahawks, with six 3-and-outs in their first eight possessions, went to the locker room trailing 13-7. But Seattle rallied with an Alexander TD to start the fourth quarter and Brown added three field goals, giving the Seahawks a 23-20 victory. Brown’s last, from 50 yards, came at the 14:55 mark, enabling him to tie an NFL record with his fourth winning field goal in the final minute.

Last meeting, Sept. 19, 2010: In the hottest game ever played in Denver, 91 degrees, the Seahawks could not overcome four turnovers and lost 31-14. Matt Hasselbeck threw an 11-yard TD to Ben Obamanu and ran 20 yards for a touchdown, but also pitched three interceptions.