The Seahawks are the envy of the NFL. A survey released Tuesday by ESPN showed that 22 percent of the NFL players polled wanted to play for coach Pete Carroll. 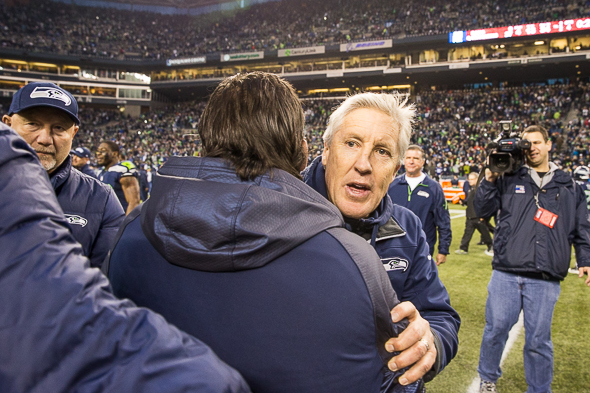 After two failed stints in the NFl, Seahawks coach Pete Carroll has earned the respect from players around the league. / Drew McKenzie, Sportspress Northwest

The perception that Pete Carroll is the quintessential “player’s coach” is apparently true.

Tuesday ESPN released the results of a survey that anonymously asked 320 NFL players to choose the head coach they would prefer to play for, if given a choice. Carroll won in a romp with 22.5 percent (72) of the votes.

The structure was simple: In November and December, ESPN NFL Nation reporters asked 10 players from each team a variety of questions, the results of which will released bit-by-bit in the days leading up to Super Bowl XLVIII.

The early feedback gives a clear indication of how opposing teams view a Seahawks organization that regularly talks about how much fun players and coaches have during practices, meetings and games.

It also speaks to Carroll’s popularity in Seattle’s locker room. Players were allowed to vote for their own coach. Of the 32 NFL head men, only 29 received votes.

The rest of the results were about what the knowledgable NFL fan would expect, save a few surprises. The top vote-getters included a mix of icy personalities and perceived “nice guys.”