Seahawks rally at Seattle Center, flag off to NY

Seahawks fans in all sorts of strange attire gathered for the Super Bowl XLVIII rally before signing the 12th Man flag Wednesday at the Seattle Center.

The 12th Man has started to party, gray skies and muddy grass be damned.

A few thousand members of the NFL’s loudest fan base endured sideways rain and wind at the Seattle Center Wednesday for the team’s Super Bowl XLVIII rally. After, those who chose to wait in a line that stretched from the Space Needle to KeyArena signed a 12th Man flag headed for Seahawks headquarters in New York.

The flag, which Sonics legend Lenny Wilkens helped lower from the Space Needle Wednesday morning, flew out of SeaTac airport at 4:30 p.m. It will visit New York’s landmarks before it’s presented to players before Sunday’s kick-off.

Kris Brannon, whose alter ego,”The Sonics Guy,” attracted attention during investor Chris Hansen’s pursuit of the Sacramento Kings, was on hand wearing Sonics green-and-gold, a Seahawks jersey and a Skittles headband. He signed the flag with the message: “Join the ’79 Sonics as Champions. Go Hawks.”

“I think it’s great,” Brannon said of the event. “I think it’ll show the players they have the support of not only the city of Seattle but the whole region.

“The 12th Man is everybody. It’s this guy. It’s this guy. It’s those ladies in line,” he said, pointing to the line that started at the base of the Space Needle. “The one thing about the 12th Man is sports are a great unifier. And the 12th man, it doesn’t matter your religion, your politics, your race, your income, your orientation. We’re all in this together cheering the Seahawks on to victory.”

The one-hour rally, which began with an appearance from the Seattle-based band, Curb Appeal, started slow. The modest but enthusiastic crowd increased when the SeaGals danced to the the team’s drum line, BlueThunder, on a stage set up outside Fisher Pavilion, adjacent to the KeyArena.

“I have good news for you: I’m not going to read you the proclamation, but I’m going to tell you about it,” Murray said. “Myself and the city council of Seattle claim this week right up until the week after the game, Seahawks Week in Seattle.”

As the grass turned to mud, spectators moved toward the stage. Free packages of Skittles were handed out to fans, a nod to Seahawks RB Marshawn Lynch, who early in the week signed an endorsement deal with the candy brand he eats during games.

The outfits ranged from typical Northwest rain gear to Halloween costumes. And whatever the hell this was. 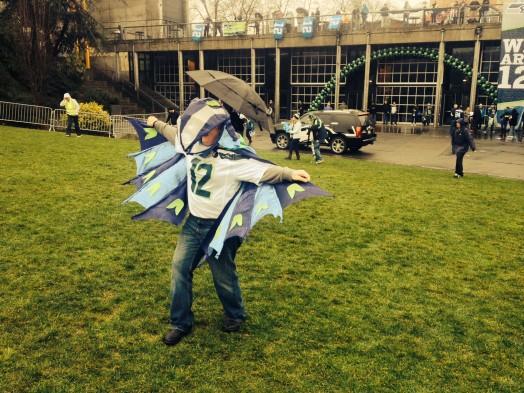 Only a Seahawks Super Bowl appearance could provoke a fan to wear something like this. / Adam Lewis, Sportspress Northwest

Kevin Henderson, a 53-year-old civil service worker from Bremerton, was among the devoted. He wore a Spartan uniform, complete with a helmet and cape. Three years ago, he bought the costume for a Halloween party that he went to dressed as a Spartan from the movie “300.” It was originally red and gold. Last offseason, he painted it green and blue, added a Seahawks logo to the side of the helmet, and the name “Seahawks” to the front.

Henderson said he plans to attend every rally he can before Sunday’s game.

The rest of the 12th man was, too, despite the soggy conditions. 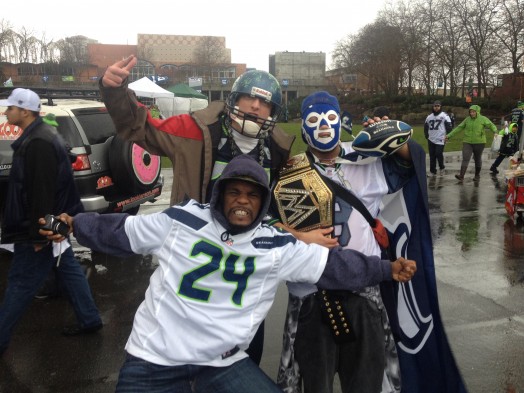