Longtime Seattle Post-Intelligencer cartoonist Dave Horsey weighs in on the irony of the Seahawks’ intense following in a state where many are known as ‘Dude.’ 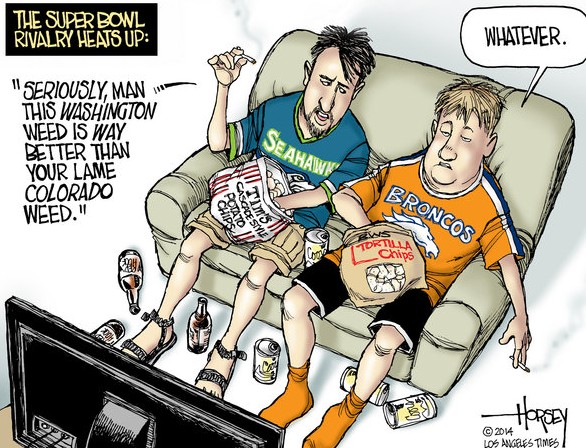 Seattleite and longtime friend Dave Horsey, cartoonist at the Seattle Post-Intelligencer now at the Los Angeles Times, marvels that the only two states in the union to legalize pot can also be the only two states with teams remaining in “the amped-up aggression of professional football.

“Are there two activities more different than football and the laid-back mellowness of smoking a joint?”

“I’ve got nothing against Denver — a perfectly fine city, as far as I’m concerned. But, as many of my readers know, I am a Seattle boy. My great-grandparents arrived in the muddy little town on the shore of Puget Sound in the 1880s. The cloudy skies, magnificent mountains and inland waterways are home to me.

“Having grown up there, I am well aware that, in the realm of sports, Seattle has had only occasional success. The University of Washington Huskies had good seasons under legendary football coach Don James before they got hammered with NCAA sanctions.

“The Seattle Mariners had a few good years when Ken Griffey Jr., Randy Johnson and Alex Rodriguez were part of the team. The Sonics won a single NBA championship before they were stolen away by Oklahoma City. The Sounders professional soccer team is immensely popular, even with a fairly lackluster playoff record. And the Seahawks made it to the Super Bowl in 2006, only to lose to the Pittsburgh Steelers.

“All of that seemed normal for a town on the far edge of America that was used to being ignored and rather proud of being apart from the mainstream enthusiasms of American life. People in Seattle have been smugly satisfied to boast about giving birth to Starbucks, Microsoft, Amazon, Jimi Hendrix, Nirvana, Pearl Jam and Macklemore.

“Sports success was for older cities that had nothing else going for them. Liberal and hip, polite and tolerant, folks in Seattle were obviously going to be among the first in the country to say smoking pot should not be a crime.

“But now, the citizens of Seattle also have this football team that just might win the Super Bowl. It’s a team that seems different from the Seahawks who lost to the Steelers. That time around, it felt a bit like a fluke. A short run of good luck. A team that played above its natural level for one season. In other words, normal.

“These new Seahawks are different — a bit unusual for a friendly town such as Seattle. Their coach, Pete Carroll, is a controversial guy who left USC just ahead of sanctions. In comparison with the straight-arrow Broncos, the Seahawks can look like bad boys. The defenders, in particular, are cocky and famous for talking trash.

“But they back it up by being the most dominant in the league. When this team wins, it is no fluke. And, because they are a young team, even if they lose the big game on Sunday to a very talented, but older, Denver team, it will not be the end. They will be back.

“This is unsettling for Seattle. A football dynasty in a city of book readers and mountain climbers? That will take getting used to. It will take more than just a double tall espresso. More than a ferry ride on a misty day. More than a hike into the forest or an escape to the San Juan Islands.

“Somebody may need to pass a joint around — which is no problem. Up there, it’s legal.”

What Horsey hasn’t considered is that the ability to hold contrasting thoughts at the same time is the sign of an agile, facile mind. Sort of like the Seahawks’ Richard Sherman — simultaneously capable of vituperation and elucidation.

The New York and national media have walked away frustrated after interviewing  Sherman, discovering he can’t be reduced to the two or three words that fit in a tabloid headline. I’d like to suggest to them a form of stress relief, but they would have to fly to Washington or Colorado to enjoy it legally.