The Seahawks raced to a 22-0 halftime lead, opened the second half with a Percy Harvin kickoff return for a TD and went on to rout the Broncos, 43-8. 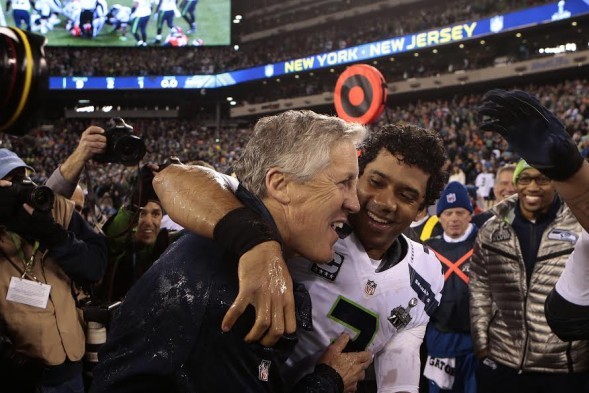 Seattle’s 35-year pro championship drought ended in a shower of blue and green confetti Sunday night at MetLife Stadium. The Seahawks, a three-point underdog, utterly overwhelmed NFL Most Valuable Player Peyton Manning and the Denver Broncos in an unexpected 43-8 rout. The Seahawks not only scored about every way imaginable, they rendered the Broncos and their No. 1 offense non-competitive.

Becoming the first Seattle team to claim a major pro sports title since the 1979 Seattle SuperSonics, the Seahawks raced to a 22-0 halftime lead and kept pouring it on, finally constructing one of the largest routs in Super Bowl history.

The Most Valuable Player award went to LB Malcolm Smith for his 69-yard interception return for a touchdown and a subsequent fumble recovery.

But it also could have gone to QB Russell Wilson, the third-youngest quarterback (25 years, 65 days) to win a Super Bowl. Or to WR Percy Harvin, who jolted the crowd with an 87-yard kickoff return for a touchdown. Or to Jermaine Kearse for breaking five tackles while making a 23-yard TD catch. Or to S Kam Chancellor for a series of big hits and an interception. Or to the entire to Legion of Boom for bottling up Manning’s receivers.

“This is a true blessing,” said Wilson, who threw a pair of touchdown passes and finished with a 123.1 passer rating. “At the beginning of the season I said to the guys, ‘Why not us”?” As the season went on, we continued to grow together and now we ended it with a great team win. We had relentless defense, we had Percy Harvin on the kickoff return, our offense was clicking on all cylinders. We got here because we wanted to be champions every day and we brought it every day.”

All of the Seahawks brought it. In fact, they set a Super Bowl record for the variety of their scores, becoming the first team in the history of the game to score with a rushing touchdown, passing touchdown, kickoff return, interception return, field goal and safety.

More than that, the Seahawks crushed Manning’s vaunted offense, which led the NFL with 37.9 points per game during the regular season. Manning established a Super Bowl record by completing 34 passes, but he could not get the Broncos in the end zone except for once in the third quarter when the game was out of hand.

The key for Seattle: The Seahawks scored 21 points off four takeaways and didn’t commit a turnover.

“This is just an amazing team,” said head coach Pete Carroll, who joins Barry Switzer and Jimmy Johnson as the only men to coach a collegiate national champion and a Super Bowl winner. “It took us four years to get to this point, but we’ve never taken a step sideways or a step backward. These guys would not take anything less than winning this ball game. Now, we take this (Vince Lombardi Trophy) home to the 12th man.”

“We just ran into a buzz saw,” said Denver coach John Fox. “You have to congratulate the Seahawks. We didn’t play nearly well enough to beat them.”

For all intents, the Super Bowl was over by halftime. As Seattle constructed a 22-0 intermission lead, the Broncos didn’t get a first down until the second quarter. Then, when Harvin, who missed most of the season recovering from hip surgery and the NFC Championship with a concussion, returned the second-half kickoff 87 yards for a touchdown for a 29-0 Seattle lead, the party began.

“We just have a great group of guys who feed off each other,” said Smith, a seventh-round draft pick who won a Chevrolet Silverado for his MVP performance. “For us to come this far, it’s great. I just played a role where I had a couple of opportunities and I made those plays. Coming in, we liked this match-up, we felt like they (the Broncos) would have to deal with us.”

The Broncos couldn’t, not even close. The Seahawks were given two points on a safety on Denver’s first scrimmage play and followed with a pair of Steven Hauschka field goals, a one-yard Marshawn Lynch TD run, Smith’s 69-yard interception return, Harvin’s kickoff return and Kearse’s 23-yard TD catch. That made it 36-0.

Manning finally put the Broncos on the scoreboard with three seconds left in the third quarter, but Wilson answered immediately with a 10-yard TD pass to Doug Baldwin. The rout was so thorough that Wilson and Lynch came off in the final five minutes, as did Richard Sherman, with a right ankle injury.

“We got the job done,” said Harvin, who rushed twice for 45 yards in addition to his kickoff return. “My hat’s off to Peyton Manning and all that he’s accomplished, but our defense was looking at that and champing at the bit to get on the field against him.”

The Seahawks largely made a mockery of Denver’s No. 1 offense by pressuring Manning on the edges and rarely letting him get comfortable. Manning threw for 280 yards, far below his average, and had a passer rating of 73.5 vs. 115.0 in the regular season. The Seahawks also blanketed Manning’s receivers downfield and eliminated Denver’s running game, holding the Broncos to 27 yards on the ground.

After the Seahawks won the toss and elected to defer, the Broncos started from their 14-yard line. But on the first play, the snap sailed past a startled Manning and into the end zone for a safety and a 2-0 Seattle lead, the fastest score in Super Bowl history.

On Seattle’s second scrimmage play, Harvin took a handoff from Wilson and sprinted 30 yards. On third and nine, Wilson hit Kearse for 12 to the Denver 18. But the Seahawks couldn’t convert in the red zone when Wilson came up short on a third-down run and settled for a 31-yard field goal from Hauschka.

After Denver went 3-and-out, Wilson directed an 58-yard drive that featured two third-down conversions and an 37-yard completion to Baldwin to the Denver six-yard line. But the Seahawks couldn’t get it in the end zone again, when a Wilson pass to Kearse was knocked out of Kearse’s hands just when it appeared he would score a touchdown. Hauschka kicked his second field goal, from 33 yards, for an 8-0 Seattle lead.

Chancellor intercepted Manning with 59 seconds left in the first quarter, setting the Seahawks up at the Denver 38. Harwin took it 12 yards on a sweep to the 22. Wilson then hit Luke Willson for five and, after a pass interference call, Lynch took it in for the touchdown and a 15-0 Seahawks lead.

The Seahawks dominated the first quarter, amassing 148 yards to 11 for Denver. They also kept Manning off the field, controlling the clock for 11:31 to 3:19.

After Denver finally picked up its first, first down with 10:20 left in the second quarter,  Mannning slipped into a rhythm and had the Broncos on a sustained march. But he was whacked attempting to throw by Chris Avril, the ball soared in the air and Smith, who caught Sherman’s tipped pass in the end zone that ended the NFC Championship game, came down with it and returned it 69 yards for a touchdown and a 22-0 Seattle lead.

Denver nearly lost a fumble on the ensuing kickoff — it was overturned on replay — and Manning directed the Broncos to the Seattle 30. But the Seahawks forced Denver to turn the ball over on downs. The 22-0 halftime margin marked the first time a team had pitched a first-half shutout in the Super Bowl since the Baltimore Ravens did it to the New York Giants, 10-0, in Super Bowl XXXV. Manning had a 46.3 passer rating at halftime.

Harvin electrified the crowd to start the second half by returning the kickoff 87 yards for a touchdown and a 29-0 Seattle lead.

Then, midway through the third, Byron Maxwell punched the ball out of the hands of Demaryius Thomas after one of Manning’s better throws and Smith recovered it, Seattle’s third forced turnover of the game.

Wilson took quick advantage, leading the Seahawks on a 58-yard drive for a 36-0 lead. After hitting Ricardo Lockette for 19 yards to the Denver 23, Wilson connected with Kearse on a 23-yard score. Kearse broke five tackles en route to the end zone.

Manning finally got the Broncos on the scoreboard as the third quarter came to a close with a 14-yard TD to Demaryius Thomas. But after Denver passed for a two-point conversion to make it 36-8, the Seahawks responded immediately when Wilson completed a 24-yard pass to Kearse to the Denver 10-yard line, setting up the TD pass to Baldwin.

Statistics meant almost nothing in this game in terms of the final score. Seattle had 341 yards to Denver’s 306, but the Broncos had 279 passing yards to Seattle’s 206. The game ultimately turned on turnovers, pressure on Manning, defensive disruption, and special teams play.

NOTES: A parade honoring the Seahawks will be held Wednesday at 11:30 a.m., starting in downtown Seattle and ending at CenturyLink Field.