The Seahawks face roster issues, but head coach Pete Carroll said Monday that he doesn’t expect the kind of falloff that many champions experience. 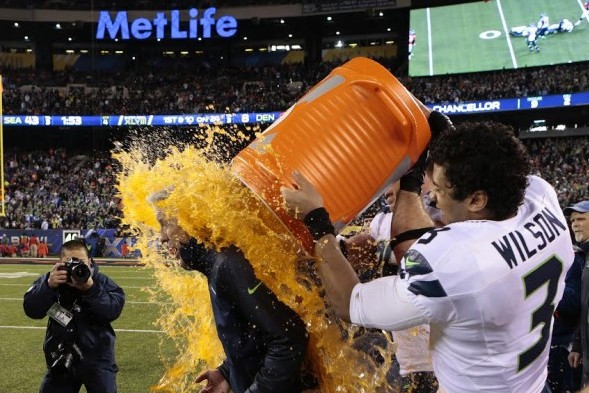 It would suit head coach Pete Carroll just fine if Seattle-area schools and businesses shut down Wednesday when his Super Bowl champion Seahawks are saluted during a mid-morning parade that will course along — starting at Denny Way — Fourth Avenue and end at CenturyLink Field.

“Heck yes, close everything,” Carroll said Monday during a morning-after press conference before departing New York for Seattle. “Let’s shut down the schools and create a memory. I feel so humbled by the fact that we get to bring this championship back to the 12s. There’s no fan base that deserves this more.”

Seattle waited 35 years for a major championship. But no one could have imagined the magnitude of the rout until it unfolded at MetLife Stadium, especially coming, as it did, at the expense of the NFL’s most prolific offense since the 1950 Los Angeles Rams. Carroll said Monday that neither he nor players were surprised by the deluge they heaped upon Peyton Manning and the hapless Broncos. Indeed, they expected it.

The competition was effectively over at halftime when the Seahawks waltzed off with a 22-0 lead. Iif it didn’t end there, Percy Harvin placed a cork in it with the second-half kickoff, which he returned 87 yards for a touchdown and a 29-0 advantage.

“We just did what we do,” Carroll said, attempting to explain the undressing his team gave the Broncos. “We really believed we could do what we did. Over the last two weeks we came to realize that we could play the way we wanted to play, and that (the Broncos) had to play us. We stayed very simple, played fast and free and tough and we got it done. And we didn’t turn the ball over in the playoffs. That’s big-time ball.”

“We were really ready for opportunities that came our way,” Carroll said. “After the first play (the botched snap that resulted in a safety) we just seized the night. You get four turnovers and they get none, and the game is going to go like that.”

A half-dozen Seahawks could have won the MVP award that went to Malcolm Smith, Seattle’s seventh-round pick in the 2011 NFL draft who spent most of the regular season as a backup, then emerged big time in the postseason. In addition to his 69-yard interception return and 10 tackles Sunday, he made the end zone interception off a tipped ball by Richard Sherman that clinched the NFC Championship.

Smith is the first player to record an interception and a fumble recovery in a Super Bowl since James Washington did it for the Cowboys against the Bills 20 years ago. But the MVP easily could have gone elsewhere.

Quarterback Russell Wilson would have been a fine choice ,as he finished with a 123.1 rating and two touchdown passes. In addition to his kickoff return, Harvin led both teams in rushing with 45 yards despite carrying the ball twice. With that, Harvin became the first player in NFL history to lead a postseason game in rushing on fewer than three carries.

Chancellor’s first-quarter interception set the tone for the game. He came to the Seahawks as a fifth-round draft choice in 2010.

Kearse had four receptions and busted five tackles to score on a 23-yard touchdown reception. A former Washington Husky from Tacoma, Kearse arrived as an undrafted free agent in 2012.

Baldwin, who scored Sunday’s final touchdown and had five catches, also went undrafted, out of Stanford. Avril, constantly in Manning’s mug, swatted the pass that made Smith’s 69-yard INT return possible. Avril was a third-round pick by Detroit in 2008.

When Carroll came to the Seahawks in 2010, many questioned his coaching philosophy and style, insisting his rah-rah way of doing things were ill-suited for the NFL. But in just four years, Carroll’s methods have been overwhelmingly validated as he and GM John Schneider have collaborated to build one of the most dominant young champions in NFL history.

“Our only weaknesses are the things that we do to ourselves (such as penalties),” said Carroll, who insisted at Monday’s press conference that the Seahawks will not suffer a post-Super Bowl letdown.

“The first meeting we have will be tomorrow,” Carroll replied, when asked when the Seahawks would begin addressing 2014. “Our guys would be surprised if we didn’t. We really have an eye on what’s coming, and we don’t dwell on what just happened. We’ll take this in stride.”

Carroll’s roster is the fourth-youngest, with an average age of 26 years, 175 days, among Super Bowl winners, and the defensive core will remain largely intact next season. Of the 15 Seahawks who played at least 500 snaps, only Michael Bennett, Clinton McDonald and Tony McDaniel are not under contract next season.

Some will be cut, others will have to take pay cuts, but Carroll and Schneider still have flexibility, even with only $3 million of cap space available.

“I think we are in a very fortunate situation,” Carroll said. “John Schneider has done an extraordinary job of constructing this roster. Some teams have a big falloff after winning the Super Bowl, but we’re not in that situation. We are just going to go on to the next challenge.

“John is the guy who has chased down the players who can play in our program. The cool thing is that these guys are growing up together and we’re going to do our best to keep the group together.”