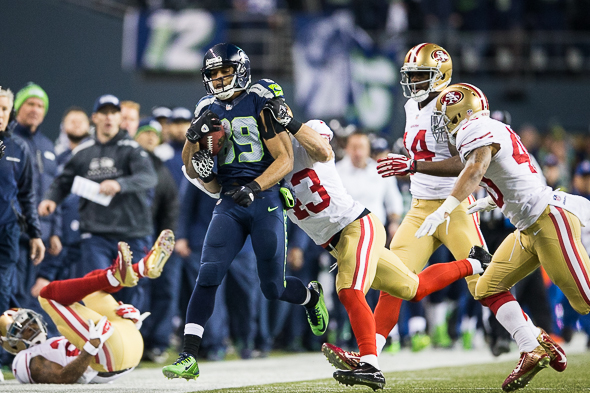 Doug Baldwin wasn’t completely ready to celebrate Sunday night after the Seahawks pummeled the Denver Broncos, 43-8, in Super Bowl XLVIII. Baldwin finished the most significant game of his career with five catches for 66 yards and a touchdown. He made time before the party to be “Angry Doug Baldwin,” the disrespected, undrafted wide receiver out of Stanford that takes all criticism and adds it to what he calls two “giant boulders” on his shoulders.

In Baldwin’s post-game press conference, he lived up to his nickname, chiding ESPN analyst Cris Carter, an eight-time Pro Bowl selection as a wide receiver in a 16-year NFL  career that ended in 2002, for saying Seattle’s receivers were “appetizers” to a run-first offense.

“Ya’ll listen to me loud and clear,” Baldwin said to reporters surrounding his podium. “Y’all listening? You hear me? For all y’all who called the receiving corps ‘average,’ ‘pedestrian’ or ‘appetizers,’ I’m not going to say any names, but (Carter) knows who he is. I respect what you did on the field. But stick to football, stick to playing football, because your analytical skills aren’t up to par yet.

“You need to go back and do it not half-ass. You’re saying some stuff that really doesn’t make sense.”

In December, Baldwin used Twitter to lash out at USA Today’s Tom Pelissero after the NFL writer anonymously quoted a personnel executive that said the play of the Seahawks receivers might keep them from winning the Super Bowl.

The feud with Carter extends to Jan. 19, hours before Seattle beat San Francisco 23-17 in the NFC Championship. Earlier that day, Baldwin watched ESPN when Carter, a Hall of Famer who played most of his career with the Minnesota Vikings, and fellow NFL analyst Keyshawn Johnson blamed QB Russell Wilson’s late-season slump on the receivers.

Baldwin responded by piling up a season-best 106 receiving yards on six receptions, including a 51-yard catch in the first half, which helped kick-start Seattle’s offense.

“It irritates the hell out of me that we have guys that constantly want to talk about our receiving corps — talking about we’re average,  we’re pedestrian,” Baldwin said following the win. “Well, I guess we’re going to walk our ass to the Super Bowl.”

After the Seahawks rolled in their second trip of the season to MetLife Stadium, Baldwin offered another jab at Carter.

“That dude that said we were appetizers told me to Google him,” Baldwin said, referring to Carter without naming him. “I did Google him. But I didn’t see any Super Bowl appearances, and I also saw two losses in conference championships. So I have a Super Bowl ring that I will gladly show to him. And if he doesn’t have time to come and see it, tell him to Google it.”

Carter fired back on SportsCenter when told of Baldwin’s comments.

“They’re Super Bowl champions. They deserve that,” he said. “They need to be concerned about (spring drills) when he’s back to being the third or fourth guy. Congratulations tonight.”

Baldwin is a restricted free agent this offseason, though a Pelissero story Monday in USA Today indicated that the club plans to re-sign him for 2014. Baldwin finished his third year in Seattle with 50 catches for 778 yards and a career-best five touchdowns despite receiving only 73 targets in an offense predicated on a power running game.

“I’ll take that,” Baldwin said after the NFC title game. “I’ll be an appetizer, but that’s a good-ass appetizer.”