The Seahawks will be saluted in a parade through downtown Seattle Wednesday, but it will be hard to top the fervor that greeted the NBA champion Sonics in 1979. 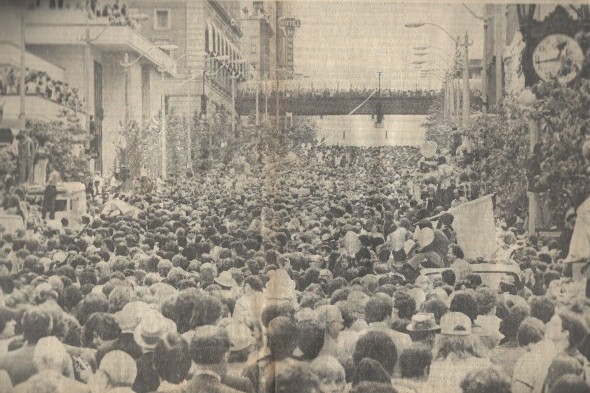 This photograph of the victory parade for the Seattle SuperSonics, taken by staff photographer Bob Miller, appeared on the front page of The Post-Intelligencer June 5, 1979.

The morning of June 4, 1979, a Monday, started gloomily, with thick clouds and drizzle, but the overcast began to clear about 9:30 a.m., a couple of hours before the start of what The Seattle Post-Intelligencer predicted would be “the biggest parade the city has seen since the end of World War II.” The newspaper wasn’t wrong.

By 11 a.m., a throng of 300,000, that figure estimated by Seattle police, lined the 16-block parade route from the Kingdome to the plaza between the Olympic Hotel and the Rainier Bank Building. The biggest swarm, about 100,000, according to Seattle Police spokesman Lee Libby, congregated at Fifth Avenue and University Street, where pennant, T-shirt and pretzel vendors worked the crowd. 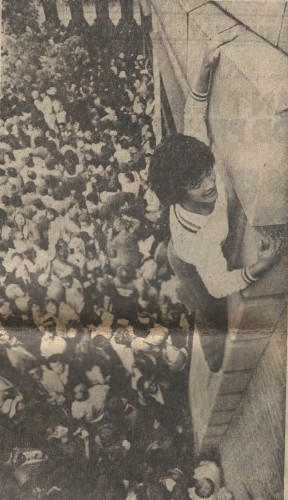 A daring fan scales a wall at the Olympic Hotel during the Sonics’ victory parade June 5, 1979.

“They absolutely choked the streets,” Libby told the newspaper.

“This crowd eclipsed the V-J Day parade,” added Lt. Roy Wedlund, who coordinated policing along the parade route. “As far as we can determine this was the largest gathering for a parade that Seattle has ever had.”

An even larger crowd than 300,000 might show Wednesday when the Super Bowl champion Seahawks — odd how easy that is to say after 35 years of title blankings — parade from Fourth and Denny to CenturyLink Field, starting at 11 a.m. But it’s unlikely that the fervor for the Seahawks will exceed by much (if at all) that which greeted the Sonics, winners of the city’s first major sports title.

On that overcast Monday 35 years ago, hundreds of spectators perched precariously on the edges of building roofs, on window ledges and atop light standards, street signs and traffic-control devices to get glimpses of convertibles bearing Lenny Wilkens, Dennis Johnson, Gus Williams, Jack Sikma, John Johnson, Paul Silas, Downtown Freddy Brown and the rest of the players, who  vanquished Elvin Hayes, Wes Unseld and Washington Bullets Coach Dick Motta, whose slogan throughout the five-game series had been “It Ain’t Over ‘Til The Fat Lady Sings.”

She finally warbled on Seattle’s behalf, and Wilkens elicited wild cheers all along the parade route as he repeatedly hoisted the silver and gold championship trophy. Above him, office workers shredded Ma Bell’s phone books and watched gleefully as Yellow Pages rained down on the parade.

Uniformed police walked ahead of each car to move spectators out of the way so that the caravan could inch its way to a civic victory celebration in the plaza, scene of so many bond sale rallies during World War II that it was called Victory Square.

It took nearly an hour for the caravan to reach the plaza, where the press of the crowd was such that it shattered a florist’s shop window, and where the masses whooped it up as each Sonics player was introduced and roundly booed politicians reading proclamations. 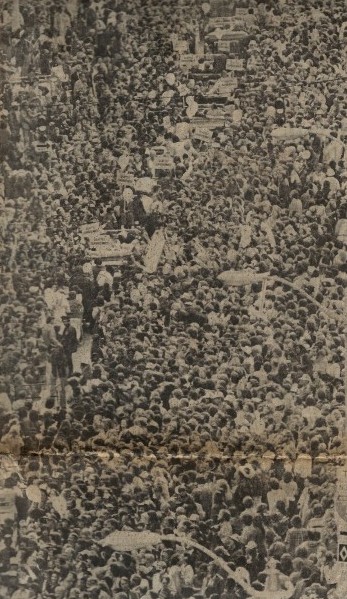 An aerial view of the Sonics’ victory parade in 1979 shows some of the 300,000 people who attended. The photo appeared in the Seattle Post-Intelligencer June 5, 1979.

“Crowds assembled on nearly every flat place that surrounded the University Plaza rally,” the P-I reported. “They cheered from atop the Rainier Tower roof, from the United Airlines Building and from the Cobb Medical Center. Some lucky insiders were seated on lounging chairs on the overhang of an Olympic Hotel entrance.”

The victory celebration capped the biggest sports party Seattle had witnessed, one that had been going on since the previous Friday night when the Sonics clinched the series in five games. This is how the P-I described the aftermath:

“From the heart of the Seattle Catholic Diocese on Capitol Hill to nursing homes where octogenarians squealed in delight, to ferry boats and to champagne-showered bars across Western Washington, the human wave of sporting emotion was spontaneous.

“Sweet victory oozed down Pioneer Square streets with honking horns and fingers pointed skyward, indicating that Seattle was finally the championship of something. Firecrackers popped in Magnolia and on Queen Anne Hill. A huge cheer went up as a ferry boat landed in Winslow at 7:30 p.m., just as the Sonics made their victory surge in the fourth quarter.

“At St. James Cathedral, the church bells rang over and over . . . Students in the University District, apparently swept away in a sea of joy, opened fire hydrants and let the pure Northwest water spill out . . . One ecstatic man climbed a streetlight at the corner of First and Yesler and led the crowd in cheers . . . More than 1,000 fans clogged Broadway Avenue East, screaming, drinking and dancing in the streets.”

The revelry went on all night, everywhere. Then, the next day, when “SuperSonic 1” landed at Sea-Tac, 30,000 fans were there to greet the team.

“It could have been Armistice Day,” the P-I opined.

Then, as now, the Seattle School District refused to give students the day off to attend the Sonics’ victory parade. But a telephone survey by the Post-Intelligencer revealed that absentee rates ran between 35 and 40 percent.

“Even a lot of school teachers, plus a couple of principals, bagged class to attend the parade,” the P-I reported.

In his day-after-the Super Bowl press conference, Seahawks coach Pete Carroll called for schools and businesses to close Wednesday so that everyone would be able celebrate the Super Bowl win. How much could it hurt? After all, we do this only once every 35 years.