Thiel: What I learned in February sports 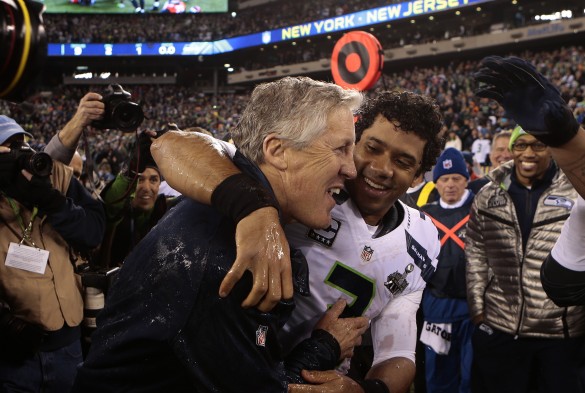 Heckuva month, February. Aside from the Super Bowl in the first few days, it’s normally the slowest month in the sports calendar. Not so far. I’ve always said any time I’m learning something, it’s a good day. Or, as it might be put in the vernacular of figure skating: Hitting my twizzle. Four worthy things I learned:

Upon reflection, the Seahawks’ triumph is nearly singular in NFL history because it revolved around the singular personality of the coach, Pete Carroll. Beyond his obvious traits of optimism, energy and verbosity, his enlightened relationship with athletes appears unique in pro football, perhaps foreshadowed in its humanity a little only by Dick Vermeil and Joe Gibbs.

The week’s media-saturated run-up to the game provided me an opportunity to listen to players explain themselves, their successes and their coach to a non-Seahawks audience that was mostly new to the story lines and genuinely curious about how Carroll could fail twice — once in Boston, once in New York — yet stick with his beliefs long enough until he found the right stage.

To a man, the Seahawks were thrilled with Carroll’s approach that respected the individual and tolerated missteps without hectoring, ignored media/fan rhetoric about big and small games, and never wavered from his principles (the man did have the guts to title his book, “Win Forever”).

That may not sound like much, but think about it in relation to the best and worst bosses you have experienced. Consistency of successful approach under pressure is an exceedingly rare virtue. It helps Carroll make ordinary players good, and a few good players great.

The NFL always is said to be a copycat league. But there’s no copying Carroll’s charismatic personality. Anyone can steal a play or a drill or a football concept, but anyone who steals a personality is immediately spotted as a phony.

There are numerous ways to win a Super Bowl. No one did it like Carroll. No one will.

No NFL player, coach or executive wants to go on the record with a pee-in-the-pants panic over the thought of a gay player in the locker room, but when SI.com allowed eight NFL staffers/executives to speak anonymously to offer skeptical views of Michael Sam’s locker-room acceptance, it told me the NFL’s fear of risk obscured any value of the greater good.

Despite official statements from the NFL that Sam would be welcomed, this is a league still not over Janet Jackson’s half-second nip slip 10 Super Bowl halftimes ago. Speaking days before Sam’s disclosure, Saints LB Jonathan Vilma told NFL Network he thought a gay player “would not be accepted as much as we think he would be accepted.”

Another anonymous scout told SI.com’s Peter King: “Unfortunately, this is a lot more okay in society than it is in lots of locker rooms. Some locker rooms are still stuck in the ’50s.”

Allowing NFL insiders to hide behind anonymity to undercut the expectations for Sam with guesses just fuels the resistance to change. No wonder Sam wanted to orchestrate the telling of his story.

Same as the old NBA boss

Could be that after the events of the past six years regarding Seattle and the NBA, I’m too jaded to appreciate the current effort. But as I tuned in and out of All-Star Weekend in New Orleans, the only thing that impressed me was between the first and second quarters Sunday, Magic Johnson led the singing along courtside of “Happy Birthday” to Bill Russell on his 80th.

It sorta seemed spontaneous, but probably wasn’t. Everything else seemed as forced and insincere as a smile from Vladimir Putin.

Things went hard south for me during the state of the league presser Saturday with Adam Silver, the new commissioner. Asked about the decades-long NBA problem of teams tanking games, even whole seasons, to have a better shot at obtaining a high draft pick, Silver worked up a posture of astonishment.

“There’s absolutely no evidence that a team in the NBA has (deliberately) lost a single game,” Silver said. “What you’re referring to is rebuilding. I don’t believe for a second that (tanking is) going on.”

Rebuilding? Riiight. That’s why the NBA went to a lottery system for the draft;  not to avoiding tanking, but to help rebuild.

Kinda like what Putin must have said when the International Olympic Committee seven years ago asked whether a sea-level, sub-tropical resort city was really a good idea for a Winter Olympics:

“What? Is Russia! Is always cold!”

In covering the Olympics, perhaps the most sour story about an athlete I encountered was at the 2006 Winter Games in Turin, Italy, where Bode Miller, who would become the most decorated Alpine skier in history, failed to medal in five events for which he was among the favorites.

After the Games, he claimed on an NBC interview he had “an awesome two weeks” of bar-hopping and “got to party and socialize at an Olympic level.” He was ripped from within the U.S. team and from without, even NBC host Bob Costas editorializing that Miller might finally get what he wanted: “Unceremoniously forgotten.”

Miller seemed to be another classic, tiresome tale of the over-indulged athlete who did not take seriously the rare opportunity afforded by his or her skills and quality training that led to an Olympics.

Then there was Sunday in Sochi where Miller, now 36, tied for a bronze medal, becoming the oldest skier in Olympics history to reach the podium. After years of headlines delightful and dubious, Miller in his post-race interview spoke honestly and then emotionally about a medal in his final race, finally having to stop talking.

The questions from NBC reporter Christin Cooper were about Miller’s feelings at the moment for his late brother, Chelone, who died 10 months earlier from a seizure. Cooper’s persistence drew widespread criticism after Miller, crying, put his head down.

It was edgy, powerful TV, and I understand why many felt uncomfortable. But in subsequent interviews, Miller was plainly unbothered, and even supportive, of Cooper’s questions.

Given the controversial headlines around his life and career over five Olympics, including custody fights over his two children, Miller’s appreciation of the moment and the grace of his subsequent response suggests he made a turn the equal of any in a slalom race.

One of the great careers in U.S. Olympic history closed with sincere answers, not questions.