Washington’s Austin Seferian-Jenkins and Bishop Sankey and WSU’s Deone Bucannon will participate in the NFL Combine in Indianapolis, starting Wednesday. 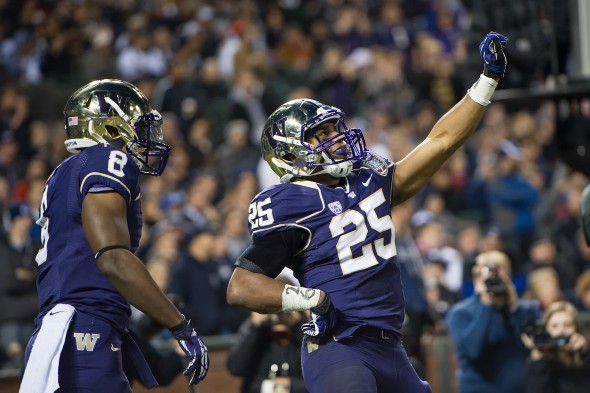 Bishop Sankey celebrates after scoring one of his two touchdowns in the Huskies’ triumph over BYU in the Fight Hunger Bowl. / David Bernal

Three players with state connections – Washington State FS Deone Bucannon and  University of Washington players Austin Seferian-Jenkins and Bishop Sankey – are among 335 players scheduled participate in the NFL combine in Indianapolis starting Wednesday. The combine runs through Feb. 25 at Lucas Oil Stadium and includes workouts, medical examinations and psychological testing for the benefit of NFL scouts.

Bucannon, who played four years for the Cougars, made first-team All-Pac-12 in 2013 after compiling a team-high 114 tackles, including 4.5 for loss. He also forced three fumbles, had six interceptions and was one of the best hitters in the conference.

In most mock drafts, Bucannon falls between the second and fourth rounds. CBSSports.com rates him as the 82nd-best prospect in the draft and second-best player at his position.

The 6-foot-6, 276-pound Seferian-Jenkins established virtually all of Washington’s records for a tight end, finishing his career with 146 catches for 1,840 yards and 21 touchdowns in three seasons. He won the John Mackey Award as the nation’s top tight end following the 2013 season.

Seferian-Jenkins projects as second-round pick who could move up based on workouts in Indianapolis. CBSSports.com ranks Seferian-Jenkins as the 45th-best prospect in the draft and the No. 3 tight end.

“I’ve done everything I can at the University of Washington. I know I’m ready for the NFL,” Seferian-Jenkins said.

Like Seferian-Jenkins, Sankey will forgo his final season of college eligibility.

“The time is right,” Sankey said after Washington’s appearance in the Fight Hunger Bowl. “I’ve proven what I needed to prove. I have to look at the position I play and the number of carries.”

The 5-foot-10, 203-pound Sankey ran for 95 yards and two touchdowns in the win over Brigham Young. That performance capped a superb junior season in which Sankey ran for 1,870 yards and 20 touchdowns, breaking Corey Dillon’s single-season school rushing record.

Most mock drafts project Sankey as a second-round pick at best, a third rounder at worst. CBSSports.com ranks Sankey as the 63rd-best prospect in the draft and the No. 4 running back.

Among those not invited was UW QB Keith Price, who conveyed his dismay in a tweet Feb. 7:

Feeling disrespected. Note to self: Tune it out and keep your focus. #ambitious #positivevibes

A combine snub doesn’t preclude a player from being drafted, but does cut his exposure. The UW and most big schools typically have a “pro day” of workouts where scouts can get second (or first) looks at players before the draft.