The Mariners are rumored to have renewed interest in free-agent designated hitter Kendrys Morales after talks with outfielder Nelson Cruz cooled. 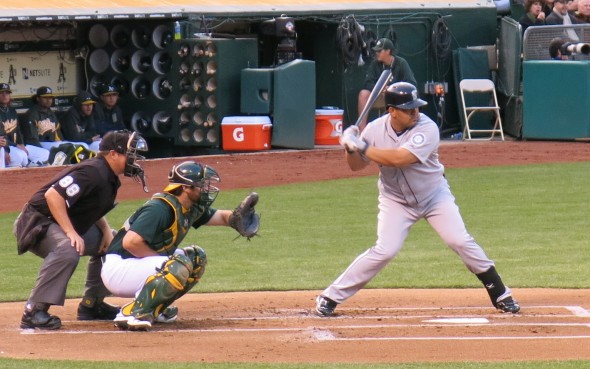 Designated hitter Kendrys Morales was a consistent run-producer for Seattle in 2013, but he hasn’t found the contract he wants in free agency. / Wiki Commons

Unsigned designated hitter Kendrys Morales might end up back in Seattle, after all, according to Boston Globe national baseball writer Nick Cafardo.

Morales, 30, was pursued this off-season by the Orioles and Pirates. But for different reasons, both backed off the free agent who hit .277/.336/.449 with 23 home runs and 80 runs batted in last season with the Mariners.

In November, Morales declined the Mariners’ one-year, $14.1 million qualifying offer. It was a signal that the Fomento, Cuba, native and his agent, Scott Boras, were looking for a multi-year deal in the free-agent market.

As of Monday night, they hadn’t found one. Nor have the Mariners signed 33-year-old outfielder Nelson Cruz after a deal seemed imminent last week.

Would signing Morales to a multi-year contract make sense?

If he returned to Seattle, it would create more competition at a pair of positions that aren’t settled entering spring training: Designated hitter and first base.

Mariners GM Jack Zduriencik signed first baseman/DH/outfielder Corey Hart to a one-year, $5 million contract in December. He also traded reliever Carter Capps to the Marlins for left fielder/first baseman Logan Morrison, a once highly touted prospect who was limited the last two seasons by a pair of knee surgeries.

Both acquisitions could take playing time away from incumbent first baseman Justin Smoak, who received an incentive-laden contract over the weekend.

Morales isn’t a candidate to replace Smoak at first base. In limited action there last year, he was immobile and unpolished. His return instead would likely force Hart, who missed all of last season while recovering from microfracture surgery to both knees, to play more outfield.

He said Sunday he envisions the former Brewer in the outfield and Morrison at first base/DH, though he added that where each plays will be determined after he assesses who is healthiest.