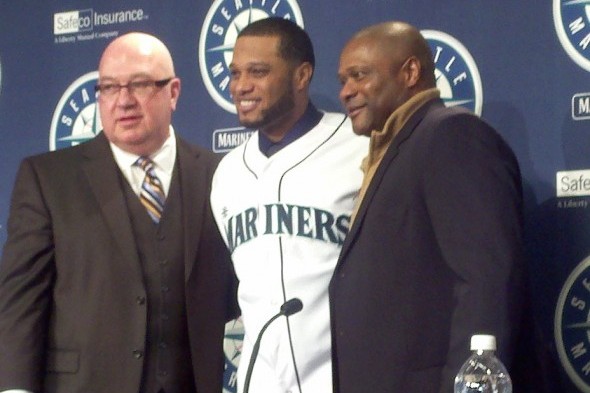 Joking with reporters following his first practice with the Mariners, second baseman Robinson Cano admitted he too wanted a free agent player fans heard a lot about in recent days.

“I wish we had Nelson (Cruz) here,” Cano said Tuesday. “We got a front office — they know what they have to do and what they decide is out of my hands. I know Nelson. Great guy, and we know what he can do with his bat and in the outfield.”

A few weeks ago, it seemed likely the Mariners would sign Cruz, 33, to a multi-year contract to add power and balance to a lineup that has just two right-handed hitters — catcher Mike Zunino and outfielder Corey Hart — projected to start when the club opens the regular season March 31 in Anaheim. First baseman Justin Smoak, a switch-hitter, last season batted just .192 and hit two home runs and a .548 OPS from the right side.

Seattle reportedly backed off signing Cruz when the sides couldn’t agree on money or contract length. The Mariners also may have reservations about whether Cruz’s numbers with Texas (.268/.327/.495) were inflated. Last season he was suspended 50 games for his involvement with Biogenesis, the Miami anti-aging clinic that distributed performance-enhancing drugs to Cruz and 13 other major league players.

When outfielder Franklin Gutierrez told the Mariners he would miss the 2014 season last week because of ongoing gastrointestinal problems, it ramped up speculation that Seattle would add another bat to appease a fan base eager for a winner.

Cano, who signed a 10-year, $240-million in the off-season, said Tuesday the Mariners weren’t about to enter another painful rebuild. He was also cautious in setting expectations.

“We want to win this year.”

There are varying theories whether Cruz, a defensive liability, would help the Mariners reach that goal, or if he would fit with the first base/DH/outfield spots that are already crowded.

He does have upside. He would likely provide the projected No. 3 hitter protection in a lineup that in 2013 finished 12th in the American League in runs.