The Seahawks’ leading rusher will plead guilty Friday to a lesser charge of reckless driving to settle a DUI case from his July 2012 arrest in Oakland. 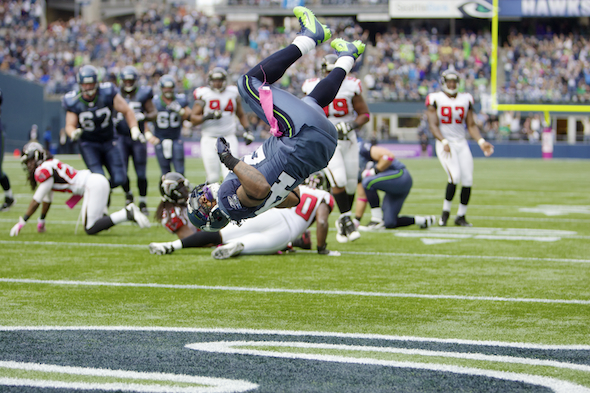 Marshawn Lynch has to be happy after avoiding a public trial on a DUI charge in his hometown of Oakland. / Drew Sellers, Sportspress Northwest

Marshawn Lynch apparently dodged another impediment, this time a 20-month-old DUI charge in California. The attorney for the Seahawks running back said Thursday that Lynch, in a plea bargain, will plead guilty in an Oakland court Friday to a lesser charge, reckless driving, to end the case and avoid the accompanying media swarm.

“We are resolving the case Friday by pleading to a wet reckless,” Ivan Golde, Lynch’s attorney, told ESPN.com, a reference to a term for a reduced DUI charge. “We have a strong case for trial and could win the case, but the last thing he needs is to go through a public trial.

“He’s a Super Bowl champion, and he has endorsements pending. For a guy in his position, it just doesn’t make any sense to go through a public trial. He has a lot at stake here. You know Marshawn. He’s not a media guy. It wouldn’t have been good for him to go through all that.”

Lynch, 27, will have two years of probation, a fine and must attend six classes on driving safety and alcohol consumption.

Lynch, the Seahawks leading rusher, recorded a .08 blood-alcohol level in a field test following his July 14, 2012 arrest in his hometown. A California Highway Patrol officer reported Lynch’s van was weaving in and out of lanes on I-880 and nearly hit two cars.

Lynch made the decision, Golde said, in large point to avoid a public trial.

“With the way the media is today, it would be tough for him to go through a trial like this,” Golde said. “It was better to plead to the much lesser charge, which basically is an unsafe lane change.”

Golde also speculated that pleading to the lesser charge will enable Lynch to avoid penalties from the NFL.