The U.S.-Soviet Olympic hockey tourney semifinal cannot be recounted without mistiness obscuring the facts. On the 34th anniversary, a review. But keep a tissue handy. 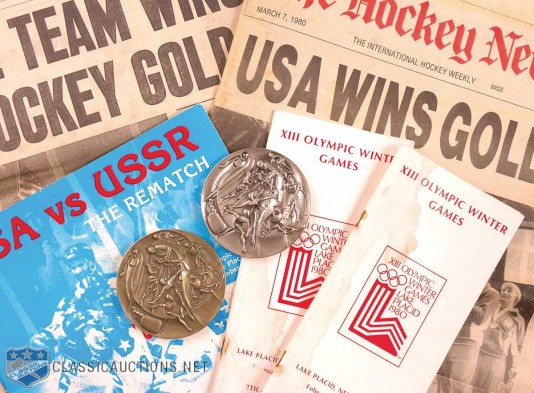 The United States hockey team met the Soviet Union in the 1980 Olympic hockey tournament in what would become known as the “Miracle on Ice.” The U.S. win stands as a legendary moment in American sports history. It was, in the simplest form of the word, an upset — one of unfathomable proportions.

The U.S. team was made up almost completely of college-age kids, while the Soviets were, in today’s parlance, grown-ass men who, under Olympics amateur rules of the day, were not considered professional athletes even though they were paid by the USSR to play hockey.

The outcome was so ovewhelming that over the years, some details surrounding it have been twisted into mythology.

It was not the gold medal game but a semifinal game. The winner played for gold. It was not televised live in the U.S. (although it was in Canada, bless their hockey-loving hearts). ABC wanted to televise it live, but only if the game could be moved to the TV-friendly time of 8 p.m. EST. The Soviets said “nyet.” The game was to begin at 5 p.m., and as far as they were concerned (keep in mind they were the REALLY Big Red back then) it would start at 5.

The fact that the game was on delay wasn’t a big deal. ESPN was less than a year old. Cable TV didn’t exist in the fashion it does now and most homes only had access to three or four channels. Al Gore hadn’t invented the Internet yet, so people were accustomed to watching things when told. People listening to radio might have heard the final score, but the vast majority of those who tuned in that night either didn’t know the result or thought the broadcast was live.

Then there’s this: Hockey wasn’t a very big deal. Americans were into the Olympics and wanted the USA to win, but there was no huge buildup for this game. That the U.S. had made it into the semifinals raised a few eyebrows. Most knowledgeable fans figured the Soviets would win easily, but the knockout format of the tourney gave the underdogs a puncher’s chance. It wasn’t as if a majority of American sports fans were sitting on the edge of their easy chairs waiting for the game to start.

The Olympics site, the tiny village of Lake Placid, NY., added to the lore. No live TV, no Internet, no cell phones, and a remote location — it was one of the last great sports stories that happened before the transformation to the information age.

The play-by-play call was by Al Michaels, a young sportscaster who recently had risen to the network level. He was not an unknown, but he was far from a household name. Prior to the Olympic tournament, he had done ONE hockey game in his career, for NBC in the 1972 Olympics. He was tabbed for this assignment because of that game and because he had been a lifelong fan of the sport. Other options included Keith Jackson and Howard Cosell.

Right man for the call

It is accurate to say Michaels rose to the occasion. His performance on the broadcast is arguably still the pinnacle of live televised sports. His simple six-word question and answer at the end of the game — “Do you believe in miracles? YES!” — became the phrase that summed and symbolized Team USA’s effort and is, understandably, the only thing most people remember about the broadcast.

But watching the game, particularly the final 10 minutes after the U.S. took the lead, is a delight. Michaels realized he was in on history and delivered a performance worthy of the  game.

The U.S. either trailed or was tied for the entire game until, with 10 minutes left, Mike Eruzione rifled home a shot that gave the Yanks their first first and only lead, 4-3. Much was made after the game about Michaels’ decision to not say a word for 56 seconds after his “miracle” line. But he also was perfectly understated after Eruzione’s goal, pausing for 26 seconds before delivering a line nearly the equal of his game-ender.

“Now,” Michaels says above the din, “we’ve got bedlam.”

At that point, the narrative improbably turned around. Going into the tournament, conventional wisdom was that no group of college kids would compete with, let alone defeat, the older and much more experienced Soviets. But with the lead, the USA played the final 10 minutes with energy and passion, while the Russians suddenly started looking old and tired.

After the lead: ‘Play your game’

Tension grew as the clock ticked slowly toward the end. With 5:16 to play, Michaels did a beautiful job of adding context by pointing out the Soviets just two weeks earlier defeated the U.S. 10-3 in a pre-Olympics exhibition at New York’s Madison Square Garden. He nervously adds, “The U.S. is leading 4-3, but Canada led the Soviets after two periods and Finland led with only five minutes left the other night.”

Michaels channels his inner fan in the game’s final two and a half minutes. Starting at the 2:25 mark he does what every hockey fan does in a must-win game where his team has a one-goal lead: He begins watching the clock. He gives the time remaining an astonishing 19 times in the final 2:25.

(The so-called “score bug,” the graphics box that shows score and time and appears in a  corner of all TV screens now, was not yet in use, so Michaels was providing a service to viewers.)

With 1:12 left, Michaels again delivered a quick piece of contextual information, pointing out that the Soviets, in late 1979 on a tour to prepare for the Olympics, defeated the New York Rangers, New York Islanders and Quebec Nordiques of the NHL. He really punched the line, ramming home the absurd notion of what is about to happen.

“You’ve got 10 seconds left, the countdown going on right now, Morrow, up to Silk. Five  seconds. Do you believe in miracles? YES!”

What happened next remains as one of the greatest sequences in TV sports history. It’s inconceivable today, when most announcers seem to feel they get paid by the word, but Michaels went silent for 56 beautiful seconds. Shot after shot was shown of the deliriously happy U.S. team mixed with a couple shots of the stunned Russians. When Michaels finally spoke he delivered yet another classic line: “No words necessary, just pictures.”

The game over, ABC eventually shifted from the scene at the arena to the studio. There, the legendary Jim McKay sat with a stunned look.

“If you think I feel like an objective reporter right now,” McKay began, “you don’t know me very well, and I think after all these years you know me pretty well. What an achievement. That may be the greatest upset in sports history. Try to imagine, if American football was played at the Summer Olympic games. Then imagine an all-star team of Canadian college boys beating the Pittsburgh Steelers. It’s that big of an upset.”

McKay’s postscript put a perfect bow on a broadcast that, all these years later, stands the test of time, just as the game.

May 17 marks the diamond anniversary of the first televised sports event in American history. In 1939, Princeton beat Columbia 2-1 in a baseball game played at Baker Field in Manhattan and broadcast on what would become WNBC-TV.

Saturday, 75 years later, after millions of hours of televised games and billions of words (23 percent from Dick Vitale alone), there’s little arguing that the seminal moment in televised sports happened 34 years ago and likely will never be topped.