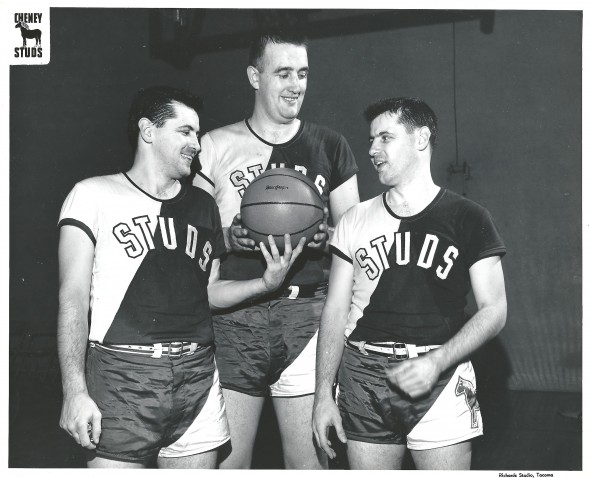 The O’Briens, Johnny, left, and Eddie, with Bob Houbregs when the trio played with the Cheney Studs. The O’Briens starred at Seattle U., Houbregs at the University of Washington. / David Eskenazi Collection

Eddie O’Brien, who helped place Seattle University on the college basketball map in the early 1950s along with twin brother, Johnny, died Friday, according to the school. O’Brien was 83. In addition to his basketball exploits, O’Brien had a notable career in major league baseball and later served as Seattle U.’s athletic director and baseball coach and as a pitching coach for the Seattle Pilots (1969).

Natives of South Amboy, NJ., Eddie and Johnny were recruited to Seattle U. by the school’s basketball coach, Al Brightman, while the twins were playing minor league baseball at a tournament in Wichita, KN., in the summer of 1949. At Seattle U., they lifted the school out of athletic obscurity.

During the three years the twins played under Brightman, the Chieftains went 90-17 and reached the NCAA Tournament for the first time.

On Jan. 21, 1952, Eddie and Johnny engineered a stunning 84-81 upset over the Harlem Globetrotters, a game that made headlines across the country and helped make the O’Brien twins All-America selections and led to Seattle’s first invitation to the NCAA Tournament in 1953 (see Wayback Machine: Seattle U. Shocks Globetrotters).

After his college basketball career, Eddie and Johnny were drafted by the NBA’s Milwaukee Hawks. But the twins never played in the NBA, opting instead for a career in major league baseball.

Mainly an infielder, Eddie played for the Pittsburgh Pirates from 1953 through 1958, ending his big league career with a .236 batting average. He finished his pro career with Salt Lake City of the Pacific Coast League in 1958, hitting .305 in 47 games.

While in Pittsburgh, Johnny and Eddie became the first twins in major league history to play for the same team in the same game. They are also one of only four brother combinations to play second base/shortstop on the same major league club.

Starting in the 1955-56 season, while still a major league player, O’Brien returned to Seattle U. during the offseason to coach the freshman basketball team. He returned to the school full-time in 1958 as athletics director, a position he held until 1980. O’Brien also served as head baseball coach for 14 years, posting a record of 276-135 (.672).

“Eddie O’Brien has been an inspiration to all of us here at Seattle U. He was a gentleman first but also a fierce competitor who loved to win,” said Director of Athletics Bill Hogan. “There will never be another like him. He was our treasure.”

O’Brien recently was diagnosed with Parkinson’s disease, which did not stop him from attending SU athletic events, including a baseball dinner Feb. 7 as well as the men’s basketball game against Grand Canyon College at KeyArena Feb. 20.

Recently, O’Brien served on the Seattle U. Athletics Hall of Fame Committee, helping put together the class of inductees that will be honored at a Hall of Fame luncheon Sunday, March 2.