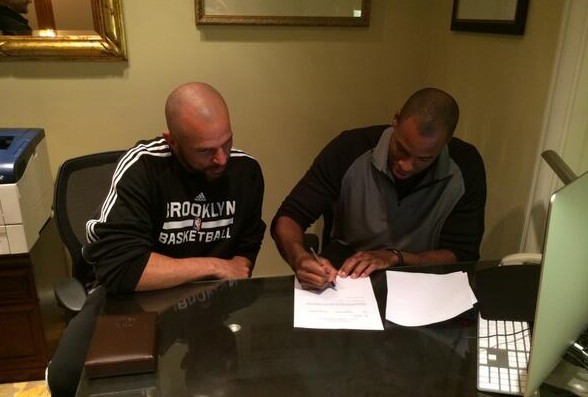 After a Winter Olympics ended Sunday in a country that discriminates legislatively against gays, a new day dawned in America when Jason Collins returned to the NBA as the first openly gay player among the four major sports leagues.

The 35-year-old center from Stanford signed a 10-day contract with the Brooklyn Nets, 10 months after he came out in a Sports Illustrated story and four months after the NBA season began.

“The decision to sign Jason was a basketball decision,” Nets general manager Billy King said in a statement. ” We needed to increase our depth inside, and with his experience and size, we felt he was the right choice for a 10-day contract.”

“I know that I can play in the NBA and it felt good to be out there tonight,” Collins told reporters afterward. “Conditioning-wise, I felt good. I don’t think I got tired. It was a lot of fun to get back out on the court and set screens, hard fouls. Didn’t take any charges tonight — that’ll change. I’ll get in position next time. As far as basketball timing, it’s going to take at least a couple of practices.”

Collins’ return was a bigger deal than merely plugging a roster gap after the Nets last week traded rebound specialist Reggie Evans, a former Sonic, to Sacramento. Collins made a cultural breakthrough by erasing a long-entrenched taboo in pro sports, after discrimination began fading throughout most of the rest of American culture.

“Jason told us that his goal was to earn another contract with an NBA team,” said Commissioner Adam Silver in a statement. “Today, I want to commend him on achieving his goal. I know everyone in the NBA family is excited for him and proud that our league fosters an inclusive and respectful environment.”

Collins, a Los Angeles native and 12-year NBA veteran, last played in April for the Washington Wizards, his sixth NBA team. He has been working out regularly. The Nets quietly practiced him last week before deciding to sign Collins after Glen Davis, another big man the Nets were scouting, said he would sign with the Los Angeles Clippers after he became a free agent Sunday.

Collins played his first 6½ seasons with the Nets, where he was a teammate with Jason Kidd, now the Nets coach, when they reached two NBA Finals. He’s also been a teammate of Joe Johnson in Atlanta and spent a half-season in Boston with Paul Pierce and Kevin Garnett.

The Nets are next to last in rebounding partly because of a foot injury Dec. 20 to starting center Brook Lopez, who played with Collins and his twin brother, Jarron, when all were at Stanford.

Collins, it would seem, has plenty of support in the Nets locker room.

The signing follows the announcement earlier in the month by University of Missouri defensive end Michael Sam, the Southeastern Conference’s defensive player of the year, that he is gay. He is expected to be a mid- to late-round draft choice in the NFL draft in May.

Sam tweeted his congratulations to Collins.

Sam held a press conference Saturday at the NFL scouting combine in Indianapolis, his first public engagement with questioners since his announcement. He handled all questions with directness, humor and grace.

“Heck yeah, I wish you guys would tell me, ‘Michael Sam, how’s football going?’ ” Sam said. “I would love for you to ask me that question, but it is what it is.

In 2013, midfielder Robbie Rogers announced he was gay, joining the Los Angeles Galaxy and becoming the first MLS player to come out.