Seahawks’ Wilson to suit up for Texas Rangers 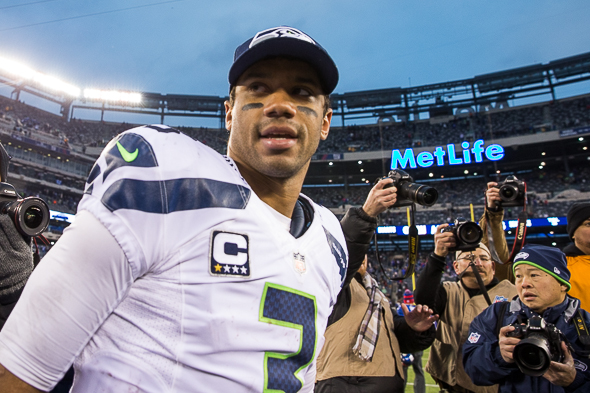 Russell Wilson became one of the youngest quarterbacks to win a Super Bowl. Does that mean he can hit a curveball? / Drew McKenzie, Sportspress Northwest

Time to find out if Russell Wilson can hit a curveball.

The Seahawks quarterback will join the Texas Rangers next week in Surprise, AZ. for a Monday morning workout, then watch from the dugout when Texas plays a Cactus League game against the Indians, the club announced Wednesday.

Last December during the MLB Winter Meetings, the Rangers selected Wilson, a former second baseman at North Carolina State (2008-10) and minor leaguer (2010-11), in the Rule-5 Draft.

It wasn’t the first instance of a club coveting Wilson. The Colorado Rockies drafted the Super Bowl winner and two-time Pro Bowl selection in the fourth round of the 2010 MLB amateur draft.

He was eligible in last year’s Rule-5 draft even though he hadn’t played competitive baseball since opting for the NFL.

Reportedly, the Rangers drafted Wilson, 25, with the expectation he come to spring training and serve as a positive influence on younger players. The organization’s official announcement came about a week after Wilson tweeted a picture that might make Mariners fans cringe.