Thiel: For Seattle, the NHL wants to be first

A “trade mission” of Seattle business people saw a hockey game and heard from Canucks officials how welcome Seattle would be as Vancouver’s rival in the NHL. 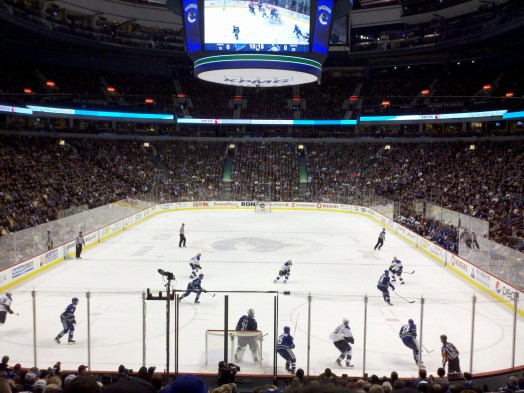 The Canucks claim more than 400 consecutive sellouts at the 18,9180-seat Rogers Arena, but the enthusiasm was a little thin Wednesday night. / Art Thiel, Sportspress Northwest

VANCOUVER, B.C.  — As far as the game Wednesday at Rogers Arena between Vancouver Canucks and St. Louis Blues, which combined had 16 players returning over 12 time zones from the Winter Olympics hockey tournament, they should have stayed on the sandy shores of the Russian Riviera.

But the dull game between two travel-whipped teams was a secondary consideration for a group of 34 business people, politicians and reporters who were invited by the Seattle Sports Commission for a 24-hour “trade mission” to try to understand whether the National Hockey League might be a better fit for Seattle than the NBA.

Don’t get carried away. Chris Hansen’s SoDo arena project is a long way from happening, and no one on the bus trip or in Vancouver offered any particular inside knowledge about the likelihood of NHL expansion or relocation or Seattle ownership.

But one observation Wednesday night was useful. A former Vancouver sports executive who has kept tabs on the scene was on the arena concourse when he spotted a Seattle reporter he knew.

Asked why the NHL, with more teams operating in the red annually than the NBA, illogically would be even quicker to expand, the source said it was a simple matter of opportunity.

It made perfect sense. The NHL is the lesser league and has no modern track record in Seattle, so it has incentive to get here sooner to establish business/political/customer relationships in a busy sports market. If the NHL comes in behind the NBA, it will forever be the little brother who gets the hand-me-downs among sponsorships, scheduling and media attention.

The NHL is even willing to absorb the hit of two, maybe three, years in an ill-fitting KeyArena that has only 11,000 seats for pro hockey.

The sport has a history with temporary housing.

When the Hartford Whalers moved to North Carolina for 1997-98, they played for two years in a smaller arena in Greensboro, while a new arena was built in Raleigh. The first two seasons (1991-93) of the expansion San Jose Sharks were played in San Francisco’s venerable Cow Palace before moving to the ‘burbs. The Ottawa Senators played 3½ seasons (1992-96) in the small, old Civic Centre before getting fancier digs outside the national capital.

So the shortcomings of the moment in Seattle pale in comparison to the long-term opportunity to throw down first with the Hansen arena project. For two good reasons: Seahawks and Sounders.

The engagement between the football and futbol teams and their regional fan bases has astonished many sports observers nationally and internationally. Addressing the Seattle group at a reception at B.C. Place, the downtown stadium that hosts Sunday the Heritage Classic, another in the NHL’s hugely successful outdoor-stadium series, Victor de Bonis, the Canucks chief operating officer the past seven years, admitted he couldn’t get over it.

12th Man signs were visible in many spots around Vancouver, he said, and many Canadian fans are regulars at the Clink. The opportunity to tap into Seattle’s extraordinary sports passions was clear to de Bonis, who saw the potential arrival of a Seattle team as no threat because the Canucks have more than 400 consecutive sellouts in the 18,910-seat arena. The Canucks franchise, owned from 1994-2004 by Bellevue cellular-phone billionaire John McCaw, has been eager for geographic rival.

As for the NHL, it sees a growing Seattle market that came relatively close to getting the Coyotes last summer before the Phoenix-area team struck a last-minute lease deal, containing considerable public money, to stay put.

League finances are heavily driven by the gate, because the NHL has yet to get a blockbuster TV deal from an American network that compares with the NBA, MLB and NFL. Phoenix is one of several Sun Belt teams struggling with its attendance. Atlanta lost its team to Winnipeg, and insider gossip has the Florida Panthers relocating to Quebec City, which is building an arena.

Keeping a relocating team in the East is logical because, after its recent realignment, the NHL has 14 teams in the Western Conference and 16 in the Eastern Conference. While NHL Commissioner Gary Bettman, a protege of former NBA Commissioner David Stern, has said nothing of substance about a commitment to expansion, he has tossed flirtatious compliments in Seattle’s direction, an old commish trick intended to drive up market interest among wannabe cities and their desperate media outlets.

The Seattle Times reported that a letter of intent to cities regarding possible expansion may be forthcoming within weeks, with a likely target of the 2015-16 season. Portland and Las Vegas are considered the best bets to join Seattle.

The driver in Seattle is the memorandum of understanding between the city and Hansen, along with his biggest partner, Steve Ballmer. The document requires securing an NBA team before commencement of the MOU’s obligations, which include $200 million from the city’s capacity to borrow.

But if the NBA is in no mood to relocate or expand — made clear in recent comments by Stern’s successor, Adam Silver — the MOU could be rewritten to put an NHL team in first place. But council members and new mayor Ed Murray would need to see some evidence of public/private support for the NHL to make the switch.

Hence, a reason for the trade mission.

The sports commission extended invites to many local electeds, but only two King County Council members showed up, Reagan Dunn and Pete von Reichbauer. Much can be read into the no-show by city politicians, but for now there is really nothing demanding action from the city.

Arena advocates and opponents eagerly await the release of the final environmental impact statement, required by state law, on Hansen’s chosen site of SoDo. The opponents, primarily the Port of Seattle, the longshore union, the Mariners and the maritime/industrial businesses directly impacted, have heavily criticized the draft EIS and have signaled their likely intent to sue if the final report isn’t considerably different.

The draft report considered two alternate sites, both at Seattle Center, locations where Hansen has steadfastly maintained he will not consider.

The upshot is that upon release of the EIS, expect negotiation and litigation. Hansen’s argument would be strengthened considerably with an NHL letter in his hand, giving renewed political momentum to rewrite the MOU while the lawyers hash it out.

Meanwhile, the Seahawks’ Super Bowl win and the Sounders’ gate success have changed the view of the nature of the Seattle marketplace. To quote entrepreneur/raconteur/quakemaker Marshawn Lynch:

It’s all ’bout that action, boss.