Silver apparently thinks Stern’s grudge against Seattle was funny. Seinfeld, he’s not. But he is much like Stern and the NHL commissioner, Gary Bettman. 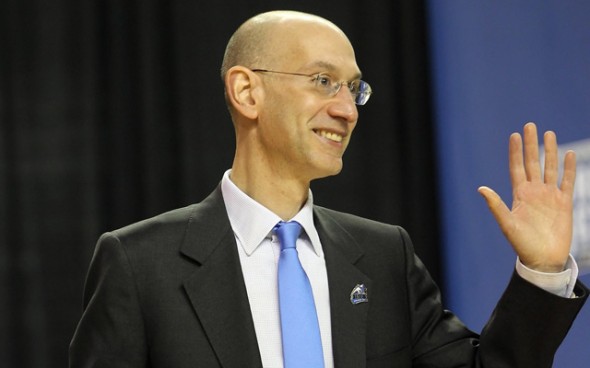 NBA Commissioner Adam Silver is not to be believed when he says he has sympathy for Seattle. / Wiki Commons

Now that David Stern has retired, perhaps the NBA is oozing toward the unfamiliar ground of honesty when it comes to Seattle. During an interview Saturday, new commissioner Adam Silver offered a quick retort to his questioner, author and noted contrarian Malcolm Gladwell.

“It has been said that keeping Seattle open was the stick to keep other teams in line . . . ” Gladwell began.

“That was Stern!” Silver said, smiling. He was attempting to be funny. It is doubtful anyone in Seattle sees him as the next Seinfeld.

The best humor always has truth at its core — even if the joke is old.  Silver was on stage at the MIT Sloan Sports Analytics Conference in Boston, and Gladwell, his lone interrogator,  covered a wide range of NBA topics, including expansion.

Noteworthy in Silver’s response was an absence of denial, or even a vague defense, of his mentor. Silver knew Stern bore a personal grudge against Seattle, stemming from his perceived disrespect during his February 2006 visit to the Legislature in Olympia to make the case for a publicly funded re-do of KeyArena for Sonics owner Howard Schultz.

Stern reiterated his contempt for Seattle and state politics at the 2007 All-Star Game in Phoenix,  recounted here by colleague Steve Rudman. By then, the team was owned by Clay Bennett, but was not yet doomed to Oklahoma City, nor had voters yet killed the chance to retain the Sonics by voting I-91 into law.

“If the team moves, there’s not going to be another team there, not in any conceivable future plan that I could envision,” said Stern. “There’s no way the league would ever return to the city.”

Six years later, Stern stood firm in his conviction by successfully brow-beating owners into rejecting the relocation of the Kings from Sacramento to Seattle. Almost from the day Chris Hansen struck a deal to buy the Kings from the Maloof family, he had little chance to succeed.

Which brings us to the past weekend and Silver’s remarks. He elaborated on expansion by saying, “I’m very sympathetic to the city of Seattle. We had a team there the large portion of time I’ve been with the league. I hope we get back there some day, but right now I’m responsible for our 30 teams, not all of which are economically healthy.”

Silver, as do all commissioners, wants it both ways: He wants to keep the pot boiling in NBA-free cities while helping owners in current cities use the vacancy as a threat to governments who resist providing public subsidies. Hence, the Gladwell question, which Silver artfully dodged.

The exchange was instructive because it appears Seattle is about to go through another episode of manipulation, this time from the NHL.

From my visit last week to Vancouver with the Seattle Sports Commission, I learned there was eagerness from Vancouver officials for a neighborhood playmate, and intrigue from some Seattle business people about Hansen’s effort to get an NHL team to execute on his memorandum of understanding he holds with the city and King County to build an arena.

In the immediate absence of a team likely to relocate, expansion has a chance to happen more quickly with the NHL for a couple of reasons: A two-team expansion at a minimum $250 million fee each would bring half a billion dollars to spread immediately among the existing 30 owners, and beating the NBA to Seattle would give the team the best chance to succeed in a competitive market.

Plus, there is a potential owner in Seattle who was born and raised in the NHL’s Hockeytown of Detroit. Even though most people associate Steve Ballmer’s sports passion with basketball, he spent his first 18 years getting his lamp lit over hockey too. And given the often minimal throw-weights of some hockey owners, Ballmer’s candidacy would be thrilling to the NHL.

Without Ballmer, there’s a greater chance that Seattle will be tossed in the mosh pit with other cities such as Portland, Las Vegas and Kansas City. That’s where it gets smarmy because Silver, by dint of job description, is obliged to dissemble, prevaricate, manipulate and mislead in his mission to pit city against city to extract maximum cash/arena breaks from the aspirants. And Silver trained at the foot of the master.

I’m not saying that such dubious behavior should disqualify the NHL, or even the NBA, from coming to Seattle. I’m saying that sports commissioners are hired by owners to make their bosses money. Every other consideration is tied for last.

So Silver has zero sympathy for Seattle. He doesn’t hope to get back to Seattle for its own sake. When he came to fully understand Stern’s vindictive, petty grudge against Seattle, he probably laughed. And yes, he needs a vacant Seattle to use as Gladwell suggested, as a stick to beat other municipalities, in the way that NFL uses the vacancy in Los Angeles to crush its governmental varmints.

NHL Commissioner Gary Bettman was once NBA deputy sheriff under Stern. He and Silver are wolves from the same litter. So should Bettman come calling this year, it would be wise for Seattle to let hockey passion and civic ego come in tied for second behind ruthless cunning for the best possible deal.