Seahawks’ Wilson debuts for a day as Ranger 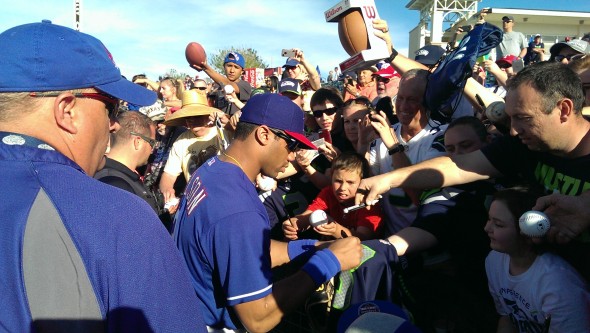 Seahawks QB Russell Wilson was the focus of Rangers and Seahawks fans after his workout in Surprise, AZ. / Drew McKenzie, Sportspress Northwest

Wilson took ground balls with a flat training mitt designed to teach infielders soft hands. He practiced his underhand flip to shortstops covering second, turned double plays and shagged fly balls. He watched from the dugout while the Rangers lost 6-5 to Cleveland in a Cactus League game.

Clips of Wilson’s smooth throwing motion made clear why the Rangers paid $12,500 to select the Seahawks quarterback from the Colorado Rockies in the amateur portion of December’s Rule 5 draft.

At a glance, Wilson looked like the second baseman who played at North Carolina State (2008-10) of the Atlantic Coast Conference, one of college baseball’s traditional power conferences. The Rockies selected him in the fourth round of the 2010 MLB amateur draft. During parts of two seasons of A minor-league ball, he hit .229/.354/.356 with five home runs, 26 RBIs, a .710 OPS and 118 strikeouts in 315 at bats. He was a threat on the basepaths (19 stolen bases in 27 attempts) but his dream of playing in the big leagues never became a reality.

Monday he reportedly tried to convince Rangers manager Ron Washington to let him pinch run, and Hall of Fame pitcher Greg Maddux tried to persuade him to throw from the mound. Wilson, who hasn’t missed a game since the Seahawks anointed him starter before the 2012 season, sat out game action at the request of the Seahawks.

“I alway miss baseball,” he told reporters Monday. “I’ve played it ever since I was four years old. I go to baseball games all the time. But at the same time I know that God made me 5-foot-11 for a reason. He wanted me to go against the odds of everybody telling me ‘no’ in football.”

The Super Bowl winner would have made it to the major leagues if he hadn’t stuck with football, according to Washington.

“If he continued to work and got the repetition (in baseball), he probably could be as good as he is a football player,” Washington said.

The Rangers invested in Wilson thinking he would participate in one day of spring training. Instead, the quarterback showed up Sunday night in Scottsdale at the annual banquet for Rangers suite holders and sponsors and held a question-answer session. Monday he spoke to players about how his work ethic helped him become a star in the NFL.

“I talked about my learning experience, being so young and coming up and starting right away and coming from different schools . . . even though it’s a different sport, it still takes the same type of characteristics to be a champion,” Wilson said.

About a month after the Seahawks stomped the Broncos 43-8 in Super Bowl XLVIII, the 12th Man was in Surprise to support Wilson’s one-day MLB stint. The Rangers, meanwhile, cashed in Sunday by selling memorabilia with Wilson’s name and number on the back. The selections included a white home Wilson replica jersey, a red-and-royal t-shirt jersey and a mutant Seahawk green and “royal” t-shirt.