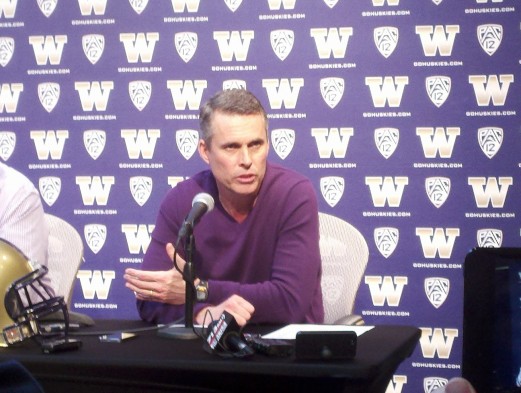 Give Chris Petersen the Oscar for spring football practice candor.

“Spring ball is usually pretty ugly,” he said Monday. “It really is. All it takes is one or two guys to not be on the same page and everything looks terrible.”

And he was talking about practice play, not QB Cyler Miles or WR Damore’ea Stringfellow, who allegedly did their own special version of ugly.

Not long after he tried on his first purple sweater, Washington’s new football coach, whose hire from massively successful Boise State was considered a coup by many, took a couple of figurative shots to the head.

He discovered that his predecessor, Steve Sarkisian, who probably had a foot out the door to Los Angeles Sept. 29, the day Lane Kiffin was fired at USC, left the recruiting roster almost bare, with five oral commits in early December after the coaching change.

Then the night of the Super Bowl, police say Miles and Stringfellow, two likely starters,  beat up two Seahawks fans after attending a party. They were charged by the city’s attorney office with assault.

Petersen suspended both indefinitely. Since then, he has kept deliberately mum about their fates.

“I have nothing new to report on that,” he said. We’ll just let that play out and see where it goes.

“There’s been no talk of those guys. They haven’t been here and we’ve moved on. We’re going. It’s not about those guys, it’s about the guys that are in the room.”

Two other starters on offense, senior WR Kasen Williams and junior OG Dexter Charles, are recovering from injuries and will miss spring, although Petersen said Williams will be ready “to rock and roll” by summer.

For now, however, the absentees, including departed TE Austin Seferian-Jenkins and QB Keith Price, for the 15 practices — three a week for five weeks until a spring game April 19 — may be more notable than the returnees.

“We don’t really want a depth chart,” he said, smiling.  “We have a seating chart.”

As with any new coaching staff, Petersen and his posse from Boise have a big learning curve with the players he inherited. His recruiting class of 24 — six from the state, including Bellevue HS star Budda Baker —  moved up from bad to average, according to the scouting services, for whatever that’s worth. None of the incoming players are likely to be on hand for spring.

So the spring adventure starts at quarterback, where Petersen has just two players, neither of whom have thrown a pass in college — redshirt sophomore Jeff Lindquist (6-3, 240) from Mercer Island, and redshirt freshman Troy Williams (6-2, 200) from Los Angeles.  Miles, backing up Price, played in eight games a year ago, starting against Oregon State, and was 37 for 61 passing for 418 yards and four touchdowns with two interceptions.

“We’ll get them a lot of work. Guys don’t need to worry about their rank in the depth chart – they just need to get better each day.”

Petersen admitted two QBs in spring is a little odd.

“You’d probably like to have four quarterbacks every spring . . . a quarterback in every class,” he said. “You graduate your old guy, then you have four. And four guys is probably too many guys for spring.

“Three guys? Yeah, you can work with; that’s not bad. Two guys is great for them. They’re going to get all kinds of reps, but you’d like a little more depth as a coaching staff.”

As for the two he has, he wants “a guy that can come back for the second day and not have his arm thrown off because we only have two quarterbacks.”

He was smiling when he said it, an expression that may be fleeting in his first spring at Washington.

“A spring game is very scary because your depth is down and maybe you’re playing a guy that really doesn’t need to be playing a lot in a spring game, so everyone else can play,” he said. “So how smart is that?”

Perhaps not too bright. But brighter than two players he likely won’t be seeing this spring.

Seferian-Jenkins has surgery, out eight weeks

The former Huskies’ star and Mackey Award winner as the best tight end in college is recovering from surgery Friday in North Carolina to stabilize a stress fracture in his left foot, which kept him from participating in the NFL scouting combine in Indianapolis and may cause him to miss Washington’s pro day April 2. The NFL draft is May 8-10.

Rated by NFLDraftScout.com as the No. 3 TE and No. 45 overall prospect, Seferian-Jenkins dropped 20 pounds to 262 and was ready to go before the pre-existing problem was discovered by doctors.

He told the Seattle Times Monday that he was “glad they found it,” and that now he’d “finally found out why my foot was hurting all year.”

Besides Williams and Charles, sophomore non-letterman WR Taelon Parson is also out . . . Petersen listed five recovering players whose practices will include little or no contact: OL Micah Hatchie, S Kevin King, DE Cory Littleton, LB Scott Lawyer, TB Ryan McDaniel . . . Petersen was heartened by the unplanned returns of DE Andrew Hudson and WR DiAndre Campbell, three-year letter winners who said they were done, but are returning as fifth-year seniors: “I think they’re both really good kids and I’m excited about those guys. They’ve been really good in the weight room, really good in the locker room. Those are the type of guys we’re all about.”  . . . Asked about players who might play on both sides, Petersen said it’s possible. Talk immediately went to LB Shaq Thompson, who was a star running back at his high school in Sacramento. Asked if he saw Thompson then, Petersen said, “Absolutely. Absolutely. Really good player. He’s a good running back, there’s no doubt. So we’ll see.”