Thr breakout season of Tia Presley, a junior from Spokane, has lit up the dormant Cougars, who join the Huskies in opening the Pac-12 hoops tourney at the Key Thursday. 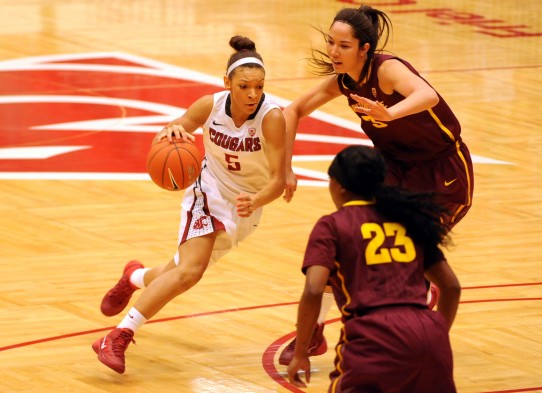 Most Washington State basketball fans know Cougars guard Tia Presley only as an athlete. Fearless, hard-nosed, relentless. It would be safe to say that most fans would be surprised to learn about the “other” Tia Presley.

“I’m pretty girly,” Presley says, a huge grin pasted beneath mischievous brown eyes. “I like to do my hair.

“I like to sit at home and watch Netflix. I’ll get hooked on shows and find myself staying up until 4 in the morning with practice at 7. I’m a big online shopper, too.”

WSU fans are grateful that Presley is also a big scorer. The junior from Spokane has scored 32 points three times in the past six games. Her 18.9 scoring average ranks sixth in the Pac-12 Conference and third in school history heading into Thursday’s opening round of the Pac-12 tournament at KeyArena, where the Cougars are seeded seventh, one spot behind the Washington Huskies (17-12).

“My teammates have so much trust in me to score, so they always get the ball to me in places that’s easy for me to score,” Presley said modestly.

Presley is shooting the ball more often and more efficiently than just about anyone in WSU women’s basketball history. This prompts Presley to reveal another surprising fact.

“Mom used to have to pay me to shoot,” Presley said.

Presley was referring to her grade-school days, when she first played.

“I remember being terrible,” she said. “So bad. I remember not wanting to go in. Like sitting on the bench: ‘Please, don’t put me in.’”

Mom’s pay plan changed all that.

“Then you couldn’t stop me from shooting!” she said with a laugh.

Presley shot herself to fame at Gonzaga Prep, where she made All-Greater Spokane League four years in  a row and set the GSL career scoring record that still stands. All of which resulted in surprisingly few scholarship offers, and not even a hint of interest from Kelly Graves, coach of the traditionally powerful Gonzaga Bulldogs.

Presley, who picked WSU over Oregon State, acknowledges that recruiters had trouble judging her college potential because she often played down low as a 5-foot-7 high schooler. She remains surprisingly effective in the paint, even though the lean-bodied Presley says she’s still just 5-7½ (despite being listed at 5-9) and 145 pounds.

“All the post stuff I learned in high school has actually benefited me in college,” Presley said. “I’m able to post up against smaller guards.

“I’m crafty inside the lane. I can get to the free-throw line, and that’s helped me.”

Quoting Presley, Daugherty said, “I will come back better than ever. I’ll come back quicker, and I’ll never wear a brace.”

Presley’s sterling play has been instrumental in one of the finest seasons in the traditionally sordid history of WSU women’s basketball. Presley and fellow guard Tia Galdeira are the first Cougars to make all-conference since Tricia Lamb in 1998-99. It’s the first time WSU has placed two players on the all-conference team (excluding honorable mention).

“It’s a great start to something big over here,” Presley said, “but we’re definitely not satisfied.”

All games on Pac-12 Networks except championship game on ESPN

WHAT TO WATCH
Fourth-ranked Stanford has won 14 regular-season titles in a row and seven consecutive tournament championships in the Pac-12, so guess who’s favored? Conference player of the year Chiney Ogwumike (shun-NAY og-WOO-me-kay), a candidate for national player of the year, is projected to go No. 1 in the WNBA draft. The 6-foot-4 senior forward averages a league-leading 27 points per game, and she’s the Academic All-America of the Year in Division I.

California, a Final Four qualifier last season, makes up for erratic shooting with a high level of athleticism. Reshanda Gray (17.3 points, 9.1 rebounds, 60.4 percent field-goal shooting) is tough down low. The 20th-ranked Bears may open against the Cougars, who pushed Cal to overtime last week in Berkeley. Gray scored a career-high 43 points on 17-for-20 shooting in the OT win, but her teammates shot 7 for 49 (14.3 percent).

Oregon State has won nine in a row – all by 10 points or more – capped by a 66-43 rout of then-No. 20 Arizona State Sunday. Point guard Sydney Wiese, Pac-12 Freshman of the Year, ranks among the national leaders with 94 3-pointers and a 44.1 percent shooting percentage on 3’s. Ruth Hamblin, a 6-6 center, is one of the nation’s leading shot blockers (3.8).

Washington is the only Pac-12 team with a win against Stanford. The Huskies finished league play with a road win over second-seeded California. The Huskies are 0-2 against WSU, but Washington is tough to beat when freshman wing Kelsey Plum (20.9 ppg) and junior point guard Jazmine Davis (19.2) light it up. A purple-tinted crowd won’t hurt Washington’s chances. The Huskies, as the Cougars, hope to play in the Women’s NIT if they don’t make it to the NCAA tournament.

Win or lose, the Oregon Ducks are entertaining. Former NBA and WNBA coach Paul Westhead loves to run, gun and press, just as he did during his glory days as the men’s coach at Loyola Marymount three decades ago. The Ducks lead the nation in scoring (93.3), but they give up almost 15 more points per game (89.2) than any other Pac-12 team. Mind you, Westhead’s Denver Nuggets once gave up 107 points in one HALF. The Ducks announced Tuesday that Westhead, 75, will not have his contract renewed at the end of the season. Westhead compiled a 65-90 record (27-64 Pac-12) in five years in Eugene.