The Sounders, who collapsed at the end of the 2013 season, launch their sixth MLS season Saturday against MLS Cup champion Sporting Kansas City. 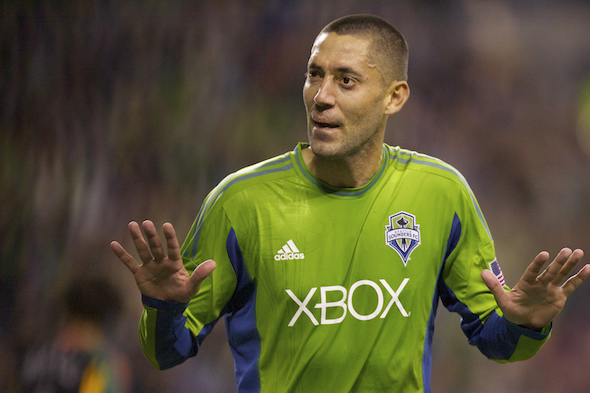 Clint Dempsey had a rugged adjustment in his return to MLS last season, but the Sounders have invested heavily with the hope that Dempsey can lead them to he MLS Cup. / Drrew Sellers, Sportspress Northwest

Between July 28-Sept. 13, 2013, the Sounders played nine matches. They won eight, including the final five in a row. Following a 2-0 victory over Real Salt Lake in front of 55,107 at CenturyLink Field, the Sounders sported the best record in MLS and seemed primed to win the Supporters’ Shield.

Rarely has a Seattle pro sports franchise suffered the kind of collapse that befell the Sounders after that. In their final seven regular-season matches, the Sounders failed to produce a victory, losing four and drawing three. They were outscored 15-5.

Although the Sounders survived the knockout round of the MLS Cup playoffs, defeating Colorado 2-0 Oct. 30, they became easy prey for the Portland Timbers in the Western Conference semifinals, losing the two-game aggregate series 5-3. The free fall, entirely unexpected, nearly cost coach Sigi Schmid his job.

The Sounders not only made a substantial investment – a guaranteed $5.038 million per year to U.S. National Team captain Clint Dempsey — to prevent such an occurrence, but to put them over the top. But after joining the club Aug. 3, Dempsey didn’t score a goal until Oct. 27 in a 1-1 draw with the LA Galaxy, and didn’t register an assist until the win over Colorado.

Nagging injuries and frequent call-ups to the U.S. team played havoc with Dempsey’s nine appearances (six starts) last year and prevented him from re-adjusting to MLS.

The Sounders could have stood relatively pat, figuring that an off-season to clear up injury issues, plus a clean slate for 2014, would erase the taste of their collapse. Instead, they waited a week before giving Schmid a vote of confidence by honoring the final year of his contract, then embarked upon a rapid roster purge.

In all, 14 players, including Fredy Montero, who did not play for Seattle in 2013, departed the franchise.

Fourteen new players entered. Here’s a look at those expected to have the most impact, starting Saturday when the Sounders host at noon Saturday MLS Cup champion Sporting Kansas City:

Jalil Anibaba (D): Acquired the 25-year-old Jan. 31, along with a 2015 conditional third-round SuperDraft pick, from the Chicago Fire in exchange for Ianni, Hurtado and the 13thoverall choice in the 2014 SuperDraft.

The Fire selected Anibaba ninth overall pick in the 2011 MLS SuperDraft. He started 27 matches as a rookie, and appeared in 33 matches in his second campaign.

Anibaba played at Santa Clara University, where he earned All-West Coast Conference honors all three seasons. He transferred to the University of North Carolina for his senior year and helped the Tar Heels to their third straight NCAA College Cup appearance while earning NSCAA Second Team All-America honors.

Michael Azira (M): The 26-year-old spent the previous two years with the Charleston Battery of USL-1, scoring seven goals in 46 appearances. Azira helped the Battery win the 2012 USL-1 Championship, scoring the game-winner in the final.

Azira played college soccer at Lindsay Wilson College and the University of Mobile, where he was an honorable mention NAIA All-America selection. A native of Kampala, Uganda, Azira was called into the Uganda National Team for a World Cup qualifier.

Chad Barrett (F): A stage 2 acquisition in the re-entry process Dec. 18, Barrett played with the Chicago Fire (2005-08), Toronto FC (2008-10), LA Galaxy (2022-12) and New England Revolution (2013). Barrett made 19 regular-season appearances in his lone season with the Revolution, including eight starts (three at forward and five at right midfield). He scored two goals and added two assists.

Chicago selected Barrett, 28, in the first round of the 2005 SuperDraft.

Tristan Bowen (M): Acquired via trade with Chivas USA that sent Rosales to the L.A.-based club. Bowen, 22, established a career high with 22 appearances and 15 starts for Chivas in 2013, scoring two goals with two assists.

Bowen made eight appearances in his two seasons with Chivas. He spent his first two professional seasons with the LA Galaxy where he made 18 appearances and 10 starts, including two goals and two assists in 2010.

A native of Los Angeles, Bowen was the first player from the LA Galaxy youth academy system to sign with the first team Nov. 12, 2008. Bowen also played for the U.S. under-18 and under-20 national teams.

Kenny Cooper (F): Acquired Dec. 13 in a trade with FC Dallas in exchange for Moffat, the 29-year-old has made 188 career appearances since joining MLS in 2006, scoring 72 goals with 16 assists. The seven-year MLS veteran ranks seventh among active players in goals, and sixth in MLS with 32 goals over the past three seasons.

Cooper earned team MVP honors in his first season with Dallas in 2006, ranking second on the club with 11 goals while starting 29 of 31 appearances. Following an injury-shortened second season, Cooper scored a career-high 18 goals in 2008, earning MLS All-Star and Best XI honors. He was also named the MLS Comeback Player of the Year and team MVP in 2008. In 2009, Cooper scored seven goals in 15 games.

On July 31, 2009, Cooper transferred from FC Dallas to TSV 1860 Munich, where he was limited to 14 appearances and two goals in Germany’s second division. He returned to MLS in 2011, playing in all 34 matches for the Portland Timbers with six goals... Cooper joined the New York Red Bulls in 2012 and matched his career high with 18 goals, including five multi-goal games.

Stefan Frei (GK): Acquired Dec. 10, a day after releasing Gspurning — who signed with Superleague Greece club PAOK — from Toronto FC in exchange for a 2015 conditional first-round SuperDraft pick. Frei, 27, was Toronto’s longest-tenured player and the club’s all-time leader in appearances across all competitions (99), winning four Canadian championships. He holds a 1.54 goals against average in 82 regular-season starts, but missed much of the past two seasons due to injury.

The 6-foot-3, 195-pound Frei, a native of Switzerland, made 81 appearances in his first three seasons with Toronto before breaking a fibula in 2012, an injury that reduced him to one league appearance in the past two years. He has 19 career shutouts, made 314 saves on 452 shots, and has gone 35-25-19 as a starter. Frei posted two shutouts in five matches against the Sounders, allowing seven goals while making 20 saves.

Toronto selected Frei in the first round (13th overall) of the 2009 MLS SuperDraft. He played three seasons for the University of California, where he was named All-Pac-10 first team, Top Drawer Soccer first team, NSCAA first team Far West All-Region.

Chad Marshall (D): Acquired from the Columbus Crew in exchange for allocation money and a 2015 third-round SuperDraft pick, Marshall, 29, spent the past 10 seasons with Columbus, earning MLS Defender of the Year and Best XI honors in 2008 and 2009. He ranks 21st among active players with 253 appearances and was capped 11 times by the U.S. National Team.

Marshall started 30 games for Columbus in 2013, logging the second-most minutes (2,638) on the team. He made a career-high 32 starts in 2011, and has started at least 24 games in eight of 10 seasons. Marshall scored four goals (including three game-winners) in both the 2008 and 2009 seasons, and has recorded at least one point every year.

Marco Pappa (M): Acquired the 26-year-old, formerly of the Chicago Fire, using a No. 1 selection in MLS’s allocation ranking. Pappa played 11 matches for SC Heerenveen of the Dutch Eredivisie in 2012-13. He previously played for the Fire from 2008-12, making 112 appearances with 26 goals and 16 assists. Pappa wascapped 30 times by Guatemala’s national team.

Pappa began his career with the Fire in 2008, joining the club at midseason on loan from CSD Municipal. In his second season, he started a career-high 28 of 30 appearances with five goals and four assists.

Gonzalo Pineda (M): Pineda, 31, made 208 appearances in Mexico’s Liga MX, scoring once in 27 appearances for Queretaro during the 2012-13 season. He has been capped 32 times by the Mexican National Team, starting three of four appearances in the 2006 FIFA World Cup.

Pineda began his pro career in 2002 with UNAM Pumas, capturing the 2004 Clausura and Apertura. Following three seasons with Pumas, he joined Guadalajara in 2006, where he made 101 appearances in four seasons. Pineda also made 12 appearances in the Copa Libertadores and played four matches in the Copa Sudamericana while with Guadalajara.

Last year marked the second consecutive year that the Sounders did not place at least one trophy on the shelf. Not only did they lose their opening match in the U.S. Open Cup, falling ignominiously to the second-tier Tampa Bay Rowdies of the North American Soccer League, they let the Cascadia Cup get away in a late-season loss to theTimbers.

Many thought owners Joe Roth and Adrian Hanauer would cut ties with Schmid after the club’s subsequent MLS collapse. They didn’t, but it’s clear Schmid doesn’t have a lot of rope left. It’s difficult to see him getting another chance if the results this year are similar to last year.