A 94th-minute goal Saturday by newcomer Chad Barrett gave a clue — for a game anyway — that the 2014 Sounders are moving away from the 2013 disaster. 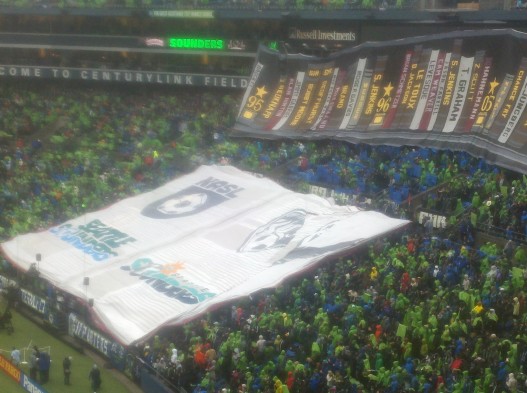 The Emerald City Supporters’ massive tifo, showing the four versions of the team logo through 40 years of pro soccer in Seattle, was unveiled in pre-game. A second “page” was opened after the cover was pulled back. / Art Thiel, Sportspress Northwest

After the dishevelment that ended the previous season, the Sounders Saturday tidied up a bit to start 2014. The fans did their part, providing another sellout and another spectacular pre-game tifo while chanting through an afternoon-long waterfall.

The players did their part, getting what amounts to a walk-off score in the 94th and final minute that broke with last season and broke the hearts of Sporting Kansas City, the defending MLS champion. It all came together in the Seattle sports tradition — audibly.

“It was so loud, I couldn’t hear myself,” said Chad Barrett, grinning. “I was pretty sure I was screaming — or going through puberty, one of the two.”

A relatively obscure part of the massive roster transformation, Barrett made himself known with a point-blank flick to end a wild scramble in the goal mouth for a 1-0 win.

“It sets a great tone,” said head coach Sigi Schmid, whose job was in jeopardy after the 2013 collapse. “Whenever you have a dramatic victory like this, it pumps everybody up. You saw the players’ reactions on the field.  You saw how thrilled they were. It’s just an indication for all the hard work they did during the game.”

Not only did it preserve a shutout for a defense that grew dubious last season, it was the fifth stoppage-time win over eight games against SKC, a preposterous ledger than now reads 7-0-1.

“That’s kind of cruel and unusual against Kansas City, but I really don’t care,” said Barrett, 28, a San Diego native and UCLA grad who was a reserve in New England last season. “I’m glad to be a part of that.”

The decibels might have been a bit more numerous than the average season-opening win, if only for the release of months-long tension surrounding the makeover that followed zero wins in the final seven regular season games.

Then came a lame exit from the playoffs at the hands of the vile Timbers of Portland and  claims of a dysfunctional locker room, followed by a genuine threat to the employment of Schmid.

He stayed, but more than half the roster left, and Saturday was the first hint that the Sounders were on the way back. Particularly noteworthy was the fact that all three second-half subs had a piece of the score.

Rookie Sean Okoli, subbed in the 86th minute for his fellow Federal Way native, Lamar Negale, began the build with a long, high cross from the near corner. Clint Dempsey, the U.S. National Team captain who entered in the 57th minute for Marco Pappa, had a straight-on header bang off the crossbar.

Then Barrett, who came in the 78th minute for forward Kenny Cooper, found a rebound bounce in front of him to his liking and swung his right foot from seven feet. Commence pandemonium.

“By bringing on Dempsey, Barrett and Okoli, we got fresh legs in the attacking position so we could maintain our pressure,” Schmid said. “With each guy, I told them to play in the space behind (the SKC defense) and eventually that paid off for us.”

The reserves were needed because SKC delivered an unusual pounding even for a team notorious for rough play. The 25 fouls were the most registered against the Sounders (by three), who had 15 of their own. For MLS’s nationally televised First Kick opener, it was brutal.

An obvious cause could have been the replacement referees, who were subbing for the regular referees who were locked out Friday in a labor dispute with MLS. For one game, it didn’t seem to make an appreciable difference.

“I thought (referee Alan Kelly) did well,” Schmid said. “I don’t have any complaints about how he handled his job. I think KC was happy about it as well. I think they are just a team that commits something like 120 more fouls than we do in the season.”

The game marked the return of Dempsey, the itinerant, globe-galloping superstar who arrived in Seattle Thursday from a national team friendly in Cyprus after being on loan for two months to Fulham of the EPL.

That meant he missed all of preseason training and arrived much as he did at midseason last year — a stranger, at least to the many newbies on the team. But the Sounders will take what they can of him, although not all at once. Hence, the bench.

“With all the travel — getting in on Thursday after flying so much –we wanted to be a little bit smarter,” Dempsey said. “if you look at the history of myself and some of the other players, people pick up injuries if you push too hard too quickly after long travel.”

Regardless of who’s in the lineup, prevailing against a good team late is an outcome of Schmid’s preseason preaching about keeping down the pedal for 90 (or 94) this season.

“I think there’s definitely more fight in this group,” said Brad Evans, a teammate of Dempsey’s on USMNT. “Not to say there wasn’t fight before, it’s just a different group. It’s something Sigi has emphasized this preseason — we’re going to be a team that fights, battles and claws. No bitching, moaning, complaining. That’s our M.O. this year.”

But Evans cautioned that one season opener is an itsy-bitsy sample size.

“It’s easy to say when you get positive results,” he said. “We’ll see when we have adversity.”

Spoken like a man who knows whereof he speaks.