Thiel: UW’s Romar is OK; not so for Bone, Dollar

It’s been a mediocre year for college hoops in the state — except, of course, for Gonzaga. That brings out its own problem — creeping knuckleheadism. 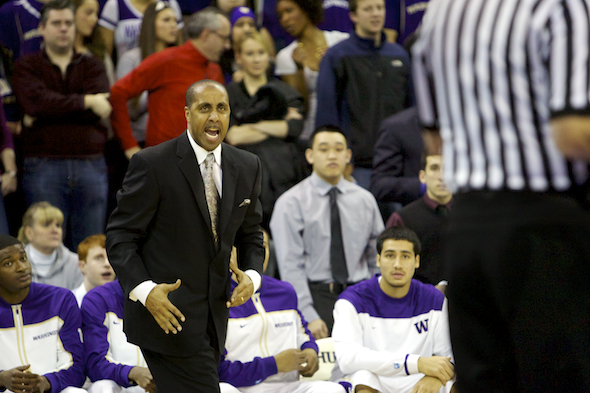 Lorenzo Romar is a little edgy these days partly because his team lacks an edge. / Drew Sellers, Sportspress Northwest file

The Lorenzo Romar basketball coaching tree may be close to a little spring pruning. As conference tourney time goes full blast this week, two of his former assistants, Ken Bone at Washington State and Cameron Dollar at Seattle University, are in jeopardy of unemployment.

By all accounts, Bone is done after five years in Pullman as the Cougars (10-20, 3-15) are in Las Vegas for the Pac-12 Conference tournament as the No. 11 seed. Also in Las Vegas is Seattle U. (5-11, 13-16), the seventh seed in the eight-team Western Athletic Conference tourney bracket. Dollar also has been at his post for five years, the past two in the WAC, where this regular season SU lost five of its final six to fall into a three-way tie for last.

The tree may soon be more of a shrub.

Asked if he has been in touch and offered advice to his beleaguered former assistants, Romar said, “We talk from time to time. Here or there. I think we all kind of take the position where we’re all in our seasons and we’ll encourage each other from time to time.

“But no one wants to come in and tell us how to run our season. We’re not trying to tell them how to run their program, but we support each other.”

Well, that support is good. Because in the cold-blooded world of big-time college basketball, they might have to adopt a chant popular with the Seahawks: “We all we got! We all we need!”

Even Romar, the trunk, is losing bark. Unless the Huskies (17-14, 9-9) can run the table for four days in Vegas starting Wednesday — better you should hope for the Mariners to be 10 games up in the AL West on Labor Day — he will miss the NCAA tournament a third consecutive time.  It’s the longest bare patch in his 12 years at Washington.

Naturally, a minority of fans is calling for his ouster. In a what-have-you-done-for-me-lately sports culture, three years without March Madness creates its own lower-case madness, which now manifests in Facebook petitions and Twitter campaigns to fire the coach.

With six years left on a 10-year contract extension he signed in 2010 that pays him $1.7 million annually, Romar is going nowhere. But it’s not merely financial.

“In every way, Coach is a great ambassador for this program — those kids, our school and this community. Now would he like a few more wins? Well, yeah. We all would. Coach knows that, and he would be the first to say that.

“But as far as I’m concerned, Lorenzo Romar is a perfect fit for Washington.”

That could be construed as the dreaded vote of confidence. But it’s hard to imagine Woodward losing his mind over a 9-9 season in a conference that will supply six, maybe seven, entrants into the tourney. Washington was one of eight teams that finished from  8-10 to 10-8, meaning there’s little difference among the big majority of conference schools.

But that is no match for the standard he created with six NCAA tourney appearances, including reaching the round of 16 three times.

This year’s team lacks that edgy, mentally tough character that was a fixture on his tourney teams that had Brandon Roy, Nate Robinson, Will Conroy, Bobby Jones and Jon Brockman. Even mild-mannered Terrence Ross is showing pro-ball steeliness.

Two high school players Romar pursued last year had that edge: Zach LaVine of Bothell High School and Aaron Gordon of San Jose, two of the nation’s top recruits. Gordon chose Arizona, LaVine chose UCLA. Each helped take his team above the Pac-12’s great mediocre middle. The Wildcats are the top-seeded team in the conference tourney, and UCLA is No. 2.

To hear the players tell it, Romar came in second on both.

“It was really close,” LaVine told the Los Angeles Daily News last month. “That was my second option. After coach (Ben) Howland got fired, my focus was on UW. Coach Romar, I really appreciate him and his coaching staff. He’s one of the coolest dudes I met during the recruiting process.”

Romar felt the same way: “We definitely recruited him and we definitely wanted him. We found out later that it was kind of a dream of his to go to UCLA.”

Regarding Gordon, Romar was thought to have an edge because he went to high school with Gordon’s father, Ed, and recruited Aaron’s older brother, Drew, six years ago. Gordon said UW was among his final choices. But like Drew, Aaron left Romar at the altar.

Pairing either player with star freshman guard Nigel Williams-Goss would have been decisive. But woulda-coulda-shoulda has never cut it among college basketball elites, especially when crowds and energy seep out of the campus gym as they did this season.

How much rope does Romar get? At Arizona State, Herb Sendek will take the Sun Devils to the NCAA tourney for the first time in five years. Romar has kept the program nearly free of conference/NCAA sanctions. Few of his players have brought trouble upon themselves.

What does get annoying for west side hoops fans happened in Las Vegas Tuesday night. Gonzaga won the West Coast Conference tournament by beating BYU and will make its 16th consecutive appearance in the NCAA tournament.

The Zags more than likely will be the state’s lone representative in the 68-team field, a tradition that is making the little Jesuit school even more haughty. One Zags fan is quite eager to rub Dawgie snouts in it.

Sen. Michael Baumgartner (R-Spokane) Tuesday proposed a bill in the state Legislature mandating that the Washington and Gonzaga men’s basketball teams play each other once a season. Really.

The series abruptly ended after 2007, when the Zags beat the Huskies for the eighth time in the previous 10 games. Each side cited scheduling difficulties, but the plain fact is that Romar and Zags coach Mark Few don’t like each other, and Romar doesn’t like getting his brains beat in by anyone.

Senate Bill 6583 would make it law that the schools play.

“I think it’s in the best interest of the state for the Legislature to take action by reigniting the competitive spirit embodied in the rivalry between Gonzaga and UW,” said Baumgartner in a press release. “Fans of both schools loved this rivalry before UW abruptly ended it, and I think it’s about time we get it going again!”

What I would like to see get going is Big Bertha, the state-owned tunnel-boring machine stuck under Pioneer Square. I propose that Baumgartner get a shovel and begin digging, so that state taxpayers can find value in the dollars invested in him. I’m sure a Gonzaga freshman can instruct him on which end of the shovel goes in the ground.

Such foolishness is, of course, the problem with losing. Romar’s recent lack of success, particularly against Gonzaga, is giving dim bulbs such as Baumgartner a chance to shine. That alone may be grounds for firing.