Seahawks’ attention turns to the fate of Tate

WR Golden Tate will receive a major pay raise in free agency, but it is by no means certain that the raise will come from the Seahawks. 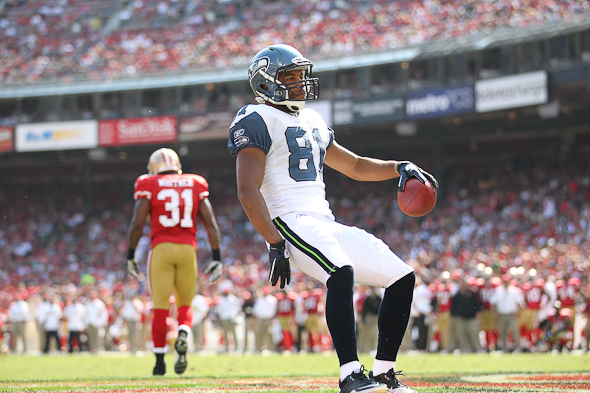 With Michael Bennett secured over the next four years for $28.5 million ($16 million guaranteed), or $4 million less than $32 million the Chicago Bears were willing to pay, the Seahawks face the disposition of their remaining marquee free agents, principally wide receiver Golden Tate, defensive tackle Tony McDaniel, and kicker Steven Hauschka.

Tate’s fate seems the next priority. As with Bennett, whether Tate stays or goes will depend on Seattle’s ability to re-sign him below his market value, established by Riley Cooper, who signed with the Philadelphia Eagles recently for $5 million per year.

Tate, who earned $630,000 last season, should expect an offer considerably north of Cooper’s, perhaps has much as $7 million annually. Tate has been more productive than Cooper throughout each of their four years in the league and, while the Seahawks are not likely to pay $7 million, the New York Jets have a glaring need (and the cap space) for the skill set Tate brings to the field.

Tate caught 64 passes for 898 yards (14.0 average) last season — both career highs — and five touchdowns. He also had 51 punt returns for 585 yards (11.5 average). Those stats don’t jump off the page largely because Tate played in a run-heavy offense.

But dig a little deeper. Tate played 762 of the Seahawks’ offensive snaps (75.3 percent), averaged 7.75 yards after the catch per reception, the highest by any NFL wide receiver with at least 15 catches. He also led all receivers with 2.6 yards after contact per catch.

Not only have Tate’s numbers improved every year, he is quarterback Russell Wilson’s favorite receiver. Wilson targeted Tate on 27.7 percent of the routes Tate ran, highest rate on the team. Tate also provides another dimension, his ability as a downfield blocker. In addition, Tate is not yet 26 and just entering his prime.

Whether Tate remains is contingent on how much higher than $5 million annually the Jets (or another team) are willing to go. As for the Jets, their general manager (since Jan. 8, 2013) is John Idzik, who spent six seasons in Seattle’s front office as vice president of football administration, a position in which he was actively involved in player evaluations. Izdik has an intimate knowledge of Tate, who, like Bennett, has expressed a desire to remain a Seahawk, but not on the cheap.

In the first few days after the Seahawks smashed Denver in the Super Bowl, Tate made a number of public appearances in Seattle and did a series of media interviews, including one with 950 KJR-AM.

“I probably shouldn’t even say this right now, but I’m going to say it anyway just because I love Seattle,” Tate told KJR. “Honestly, I would rather take a little less to be happy and win ballgames than to take way more and go to a crappy city where the fans don’t give a crap about the team . . . you win a game once a month — something like that. I would much rather stay in the situation that I have now for a little less than to go and try to break the bank somewhere else.”

More recently, Tate did an interview with Alex Marvez and Bill Polian on Sirius XM NFL Radio. He didn’t back off his statement to KJR-AM, but elaborated on his situation.

“At the end of the day, I did my job,” Tate said. “I performed on the field. I made plays. I helped my team win, At this point, I’m just thinking everything is going to work out. It’s going to work out the way it should work out regardless of whether it’s in Seattle or elsewhere.

“Obviously, I would like to be in Seattle but the hard part is over. I did my job and handled my business. I stayed healthy and was reliable all year. Each year I’ve shown to be better than the last. With that being said, I’ve done my part so I can’t really worry about it.”

The Seahawks must also evaluate whether Tate is worth bringing back given other decisions, and whether they can replace Tate with a less-expensive alternative either in free agency or in the May draft without much drop in production.

One such decision involves kicker Steven Hauschka, who made 33 of 35 field goals (one was blocked) and all 44 of his PATs. His 143 points rank second all-time in Seahawks history (Shaun Alexander 168 in 2005) and first among kickers.

Hauschka collected $780,000 last season – in the NFC West, San Francisco’s Phil Dawson made $2.25 million and Arizona’s Jay Feely $1.75 million — and will probably want $3 million or more in order to stay. That’s what the top kickers in the league make, and Hauschka is among them.

The Seahawks were probably going to have to choose between McDonald and McDaniel. The choice would have been McDonald, but he signed a four-year, $12 million deal with Tampa Bay Tuesday.

The draft is deep in tight ends and the Seahawks will have Anthony McCoy back in 2014 after the USC alum, out all of last year with an Achilles tendon injury, signed a one-year deal Tuesday.

“Seattle came at me tough,” McCoy said Tuesday. “They were the team that drafted me so at the end of the day I felt like this was the best place to continue my career in the NFL. I feel like I made the right choice.”

In order to return, Miller will have to agree to have his contract significantly restructured. At 32, Clemons is likely out the door.

As the NFL free agency period opens, the Seahawks have already spilled some blood, but not as much as they could have spilled. That’s a testimony to the work environment Pete Carroll has created for his players, an important factor in Bennett staying, and GM John Schneider’s ability to work under salary cap restrictions.