Mariners pitcher Scott Baker overcame some control problems in the first inning to help Seattle to another win in Cactus League play. 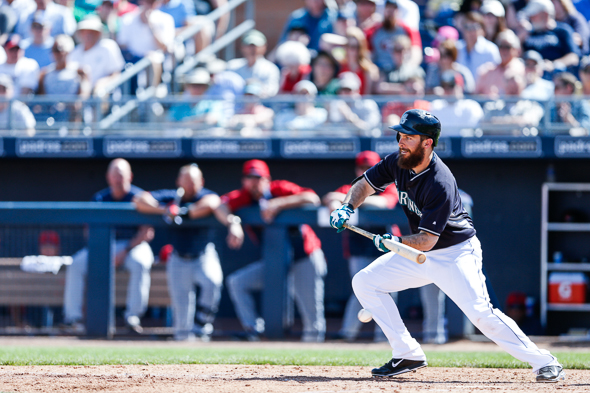 Trying to secure his spot in the starting rotation, Mariners right-hander Scott Baker pitched an eventful three innings Tuesday against the Los Angeles Angels of Anaheim. He gave up five hits, five runs, two of which were earned, before getting replaced in the fourth inning by somebody named Emilio Pagan.

That in itself wasn’t interesting, nor was the outcome: Seattle’s minor leaguers rallied late to lead the Mariners to a 10-6 win, improving in Cactus League play to 11-4-1.

No, the highlight — or lowlight, depending on perspective — came in the first inning after Baker recorded the first two outs in order.

He then plunked first baseman Albert Pujols, DH David Freese and second baseman Howie Kendrick, loading the bases for catcher Hank Conger, who flew out to end the inning.

Genius ploy to strike fear into the minds of Angels hitters? Lingering rust from the Tommy John surgery that wiped out his entire 2012 season and most of the past season? Sweaty palms?

Assuming the rosin bag wasn’t stolen before the game, it probably had something to do with Baker’s time off. His fastball is usually around 90-91 miles per hour, and he never gained a reputation for intimidating hitters during his seven productive seasons with the Minnesota Twins (63-48, 4.15 ERA).

The 32-year-old from Shreveport, LA.,  certainly didn’t overwhelm the Angels Tuesday — they knocked him around for three doubles in as many innings — though he was the victim of third baseman Chris Taylor’s throwing error to begin the second inning, which led to three unearned runs.

Baker had a 1.80 ERA in five innings over two spring starts. He left Tuesday with a 3.38 ERA, which would be more than adequate as a No. 5 starter on a staff desperate for depth.

So long as he doesn’t keep pace with Tuesday’s pace of nine hit batsmen per nine innings, it could happen.

It wasn’t so long ago that Smoak was considered the worst offensive first baseman in baseball history through his first 1,500 at bats.

Then came his modest resurgence in July 2013 (.289/.372/.470), a bad August (.229/.324/.417), followed by an egregious September (.184/.268/.425). He ended the season hitting .238 with a career-high 20 home runs and 50 RBIs. When Mariners general manager Jack Zduriencik brought in right fielder/first baseman Corey Hart and outfielder/first baseman Logan Morrison this offseason, it seemed Smoak needed to emerge from a spring training competition to keep his job.

Monday manager Lloyd McClendon named Smoak his starting first baseman. A few weeks ago, Smoak said first base was “his job to lose.” He responded by hitting .292 (seven-of-24) through his first 10 spring training games.

In a story by The News Tribune’s Bob Dutton, McClendon said he wants Smoak to hit 40-45 doubles and 20-25 home runs instead of the other way around. He also wants the 27-year-old to focus on being a good hitter, rather than hitting home runs.

Smoak can start by raising a career batting average that is just .227.

The Mariners scored three runs in an eighth inning thanks to their first overturned instant replay review of spring training. With one out, outfielder Jabari Blash grounded into a 6-4 fielder’s choice. McClendon came out and argued that Angels minor leaguer Andrew Romine didn’t control the ball long enough to record an out. After review, the umpires overturned the call, which loaded the bases.

Xavier Avery followed by drawing a walk, which forced in the tying run. Then, Mariners minor leaguer Mike Dowd was hit by a pitch to force in the go-ahead run and give Seattle a 6-5 lead.