Tate jumps at the money, $31 million in Detroit

Golden Tate, Seahawks’ leading receiver, said he didn’t want to go to a “crap” city and “crap” team, but went to bankrupt Detroit to play for the 7-9 Lions. 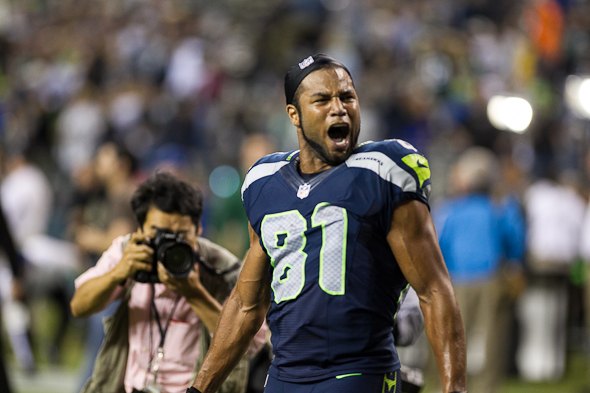 Golden Tate insisted he wanted to remain in Seattle, but jumped at Detroit’s offer of $31 million over five years. / Drew McKenzie, Sportspress Northwest

Golden Tate said all the right things about wanting to remain with the Seahawks, even offering a hometown discount in the first few days after the Super Bowl. But the fourth-year wide receiver out of Notre Dame was seduced by Detroit’s cash and five-year commitment Wednesday and signed with the Lions. Tate told ESPN that the deal was for $31 million with $13.25 million guaranteed.

The Seahawks hoped to retain Tate, their leading receiver last season, with a salary in the $5 million per year range, but Tate signed with the first team he visited in free agency, a genuine blow to the Seahawks.

Tate wound up doing exactly the opposite of what he said he wanted to do. A few days after Seattle defeated Denver in the Super Bowl, Tate’s interview with KJR-AM made it sound as if his heart was in Seattle.

“I probably shouldn’t even say this right now, but I’m going to say it anyway just because I love Seattle,” Tate said. “Honestly, I would rather take a little less to be happy and win ballgames than to take way more and go to a crappy city where the fans don’t give a crap about the team . . . you win a game once a month — something like that. I would much rather stay in the situation that I have now for a little less than to go and try to break the bank somewhere else.”

So Tate, who also had interest from the New York Jets and Jacksonville, winds up in Detroit, which filed for bankruptcy in July, with a team that finished 7-9 and out of the playoffs last season. The Lions are one of 13 NFL teams to have never won a Super Bowl.

Tate played 762 of the Seahawks’ offensive snaps (75.3 percent), averaged 7.75 yards after the catch per reception, the highest by any NFL wide receiver with at least 15 catches. He also led all receivers with 2.6 yards after contact per catch.

Not only did Tate’s numbers improve every year, he became quarterback Russell Wilson’s favorite receiver. Wilson targeted Tate on 27.7 percent of the routes Tate ran, highest rate on the team. Tate also provided another dimension, his ability as a downfield blocker.

On the game’s final play, Wilson threw a pass intended for Tate in the corner of the end zone. Tate and M.D. Jennings both hand their hands on the ball. Replacement officials ruled a simultaneous possession, giving Tate and the Seahawks a touchdown and a 14-12 victory. The NFL later acknowledged that Tate should have been called for offensive pass interference for shoving the Packers’ Sam Shields.

Now Tate gets to play the Packers twice each season.

With the Feb. 28 release of Sidney Rice and Tate’s departure, the Seahawks have three primary receivers on the roster: Doug Baldwin (a restricted free agent), Jermaine Kearse and Percy Harvin, who missed almost all of last season with a hip injury before returning for the Super Bowl.

Wide receiver thus becomes a priority for the Seahawks, either during the remaining free agency or in the May NFL draft.