Another game of 25 fouls was delivered upon the Sounders, but star-studded Toronto had the means to overcome. Dempsey’s retaliation did his reputation no good. 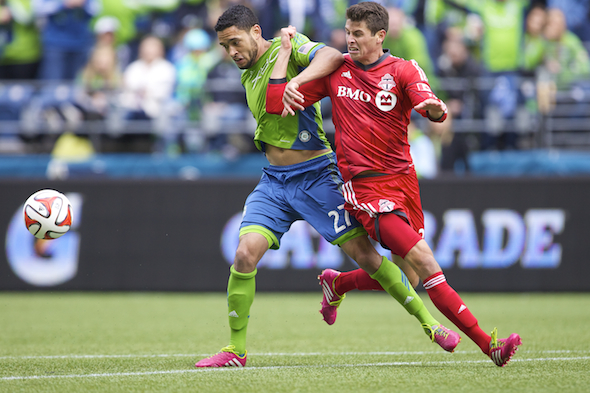 In one of many tangles Saturday, the Sounders’ Lamar Neagle was locked up by a physical Toronto FC team. / Drew Sellers, Sportspress Northwest

Clint Dempsey claimed his strike to an opponent’s groin was an accident. Coach Sigi Schmid seemed to think the “really soft” goals surrendered were odd mistakes. And all of the Sounders were certain they had control of the run of play Saturday.

But the Clink scoreboard read Toronto FC 2, Sounders FC 1. In a match that seemed to count for more than one result, the Sounders came away from a home game with zero points against a celebrated team featuring World Cup talent.

There’s little dispute that the seasonal script rewritten for 2014 so far hasn’t been a whole lot different from the episodes that closed 2013 so gruesomely. The Sounders think of themselves as the better team, but they keep getting knocked around and down, and aren’t organized enough to prove their belief.

“I think we had the better of the run of play,” Schmid said. “We had the tactics that I thought were working, but we didn’t convert them into goals.”

The tactics by Toronto were the same as those deployed a week ago by Kansas City in the season opener — pound on Dempsey and anyone dressed similarly, and take your chances. It worked well enough that KC had a scoreless draw through 93 minutes before a final-second ricochet saved the Sounders, 1-0.

“(The opposition) can’t keep averaging 25 fouls against us every game,” said Schmid, although he didn’t explain why that was true. If teams can, they will, especially with replacement MLS referees. “It’s one way that disrupts the rhythm of play a little bit, when teams are fouling us that much. If you add that up for a whole season, I don’t know if it’s a team record for us, or for any team in the league, to get fouled that often.”

Neither Schmid nor the players laid blame on the officiating. But the provocations apparently are building some contempt within the Sounders. During a dead ball in the first half, Dempsey gave a backhand flip of the hand to the crotch of Toronto defender Mark Bloom, who crumpled to his knees. The officials didn’t see it.

The ancient tactic has always defined poor sportsmanship. Dempsey, who slowly ambled away from the fallen opponent, was quick to claim the deed was not as it seemed.

“To be honest with you, I felt a hand on my back,” he said. “I was just trying to swipe his hand away from touching my back. I understand I did catch him a little bit. I apologized to him about that.”

Judge for yourself with the video link here. Dempsey could be seen moments later telling Bloom he was sorry. Maybe it was accidental, but it’s not the kind of video that flatters the captain of the U.S. Men’s National Team three months before the World Cup.

But if Dempsey was responsible for the afternoon’s lowlight, he was also responsible for the highlight. In the 68th minute, he took a feed from striker Obamfemi Martins and pushed a shot past a fellow World Cup-class player, goalkeeper Julio Cesar. It was the second goal of his brief Sounders career, and a delight for 38,441 to glimpse the highly compensated Martins-Dempsey weapon finally discharge.

But the goal was the only success among a litany of second-half opportunities as Seattle poured on pressure after falling in a 2-0 hole 24 minutes into the game. Both scores were by Jermain Defoe, a longtime star with EPL’s Tottenham Hotspur who joined Toronto about the same time as Michael Bradley, another USMNT member who made a Dempsey-like move in Janaury — leaving Europe to return to MLS for many millions.

Defoe’s first score came in the 17th minute as the Sounders were temporarily a man down. Midfielder Brad Evans was kicked hard in the right calf during a tackle and limped to sidelines. He later returned gimpily, but the Sounders were down 1-0.

“We were really unhappy with the fact we didn’t deal well with the situation when Brad was off the field injured,” Schmid said. “I think that is something we have to deal with better.”

In the 24th minute, newcomer Marco Pappa made a weak back pass in the Sounders’ end that Defoe intercepted and pounded past Stefan Frei.

Many futile Sounders volleys later, the mistake by Pappa stood as the difference. It was a bigger deal than the usual defeat, given that Seattle and Toronto, both of whom spent heavily for world-class designated players, are among the favorites to meet in the MLS Cup.

“It felt like a game that had a bit of an edge,” said Reds coach Ryan Nelsen. “It was built up, so it was a powerful game for us. We probably didn’t have the greatest preparation going in – we were probably under-prepared. To come to a place like Seattle, which is one of the top places in the league, and get a win is very substantial.”

Meanwhile, the Sounders, themselves under-prepared with a lineup relatively new to one another, predictably tried to play down a loss in March during a season that goes until November.

It’s too early to really gauge a team,” Dempsey said. “There are good signs that we do have character. We’re trying to do something special here. We just came up a little short in getting the equalizer.”

True enough. But to Sounders fans looking for some distance from the 2013 collapse, the outcome was a shot to the jewels that crumpled knees.