Toronto FC has suddenly become a glamor team after several expensive off-season additions. The Sounders and Reds meet Saturday at the Clink. 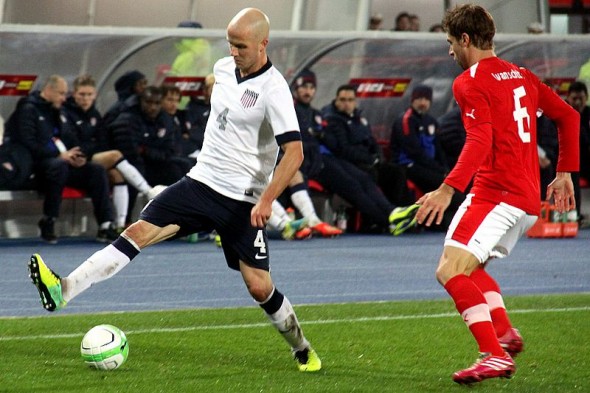 Michael Bradley (4), with the U.S. National Team during a friendly against Austria in November, will lead Toronto FC against Seattle Saturday. / Wiki Commons

To take the sting out of last year’s late-season lameness and better prepare for a run at the MLS Cup, the Sounders junked half of their roster over the winter, importing 14 new players of various ages and experience. In the opener, one of the least-publicized imports, Chad Barrett, roused 39,240 scarf wavers in his first match with a 94th-minute goal that beat defending league champion Sporting Kansas City 1-0.

Although Seattle’s off-season roster changes were substantial, they paled into inconsequence – at least financially – compared to the ambitious, bank-breaking moves made by Toronto FC, an MLS afterthought since its 2007 inception. It has had eight coaches in seven years.

That wasn’t the extent of it. TFC brought in nine new players overall and jettisoned 12 others with the intent of competing immediately for the MLS Cup.

Bradley and Defoe, whose acquisitions were engineered by TFC honcho Tim Leiweke, CEO of Maple Leafs Entertainment and brother of former Seahawks president Tod Leiweke, cost the franchise nearly $100 million. By the time the spending spree was done, Toronto had so many designated players on its roster – four – that it had to palm off one, Matias Laba, on the Vancouver Whitecaps to get to the league maximum of three.

The 31-year-old DeFoe is the 14th-highest scorer in English Premier League history with 124 goals and fifth-highest in Tottenham Hotspur history. DeFoe made 55 appearances for England’s National Team, with 19 international goals.

Bradley, a New Jersey native who spent the past eight years playing in Europe, mainly with Heerenveen of the Dutch Eredivisie and Borussia Monchengladbach of the German Bundesliga, but most recently for Roma (2012-14), is a member of the U.S. National Team. So is Seattle’s Clint Dempsey, whom he’ll oppose at 1:30 Saturday when the Sounders and TFC engage at CenturyLink Field.

When MLS released the first version of its regular-season schedule last winter, the Toronto FC-Seattle match had scant to recommend it. The Reds had been windshield splatter for seven years, lost five in a row to Seattle, and never won a game at CenturyLink, going 0-1-3 with a goal-scoring deficit of 9-3. The game was placed in a 7 p.m. time slot, meaning local TV (yawn) only.

But after the splurge on Bradley and DeFoe, et al, league marketers, deducing that the Reds morphed into the MLS equivalent of the Miami Heat, moved the match to 1:30 p.m. It has since been picked up by NBCSN and become the best definition of an early season glamor game.

Idle last week, the Reds will have to do without the services of Gilberto, who remained in Toronto with a hip flexor injury that has sidelined him for the past several weeks. He tops a list of injured TFC players that includes Alvaro Rey, Bradley Orr and Justin Morrow, one reason why coach Ryan Nelsen downplayed the importance of the match.

Another reason is that Nelsen figures his team, despite its expensive upgrades, needs many more matches than one to realize its potential – the same sort of situation the Sounders faced late last season when they brought in Dempsey, who didn’t score for a month after his arrival.

“This game is not going to define us,” Nelsen said in a conference call this week. “It’s going to take a bit of time to get everybody kind of on the same wavelength. Even Seattle, when they brought Clint Dempsey over — just one piece — were a bit of a different team last year. Everybody has to kind of get used to each other and we’ve done it with several big pieces and several other pieces as well. The next probably five, six, or seven games are going to define who we are.”

Saturday’s match will also help define the Sounders. Another of their newcomers should have a big hand in it. Seattle goalkeeper Stefan Frei, who posted a shutout in his Seattle debut, played in the nets for Toronto FC for the past five years (2009-13).

Given Leiweke’s overhaul, Frei won’t be facing many of his old teammates. But he will be facing one of the most expensive rosters he’s likely to encounter.