Once again, the state is left with a single entry, Gonzaga, in the NCAA basketball tourney. So let’s embrace another team that has a couple of state connections. 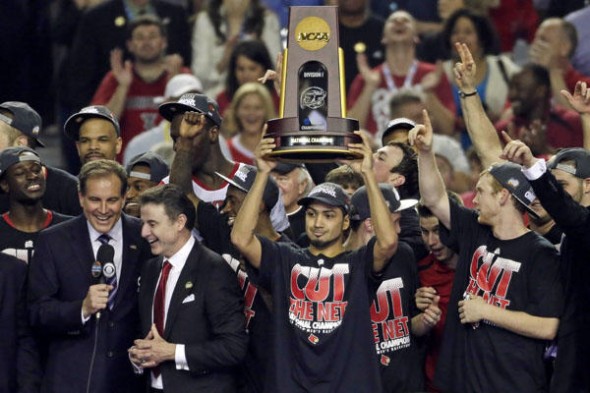 Cheering for big-time college basketball in this state lately is a little like pulling for the cook from Denny’s on “Iron Chef.” Good for him, but there’s only so much to be done with chicken fried steak, even with country gravy.

The only team from the Evergreen State to make the NCAA tournament Sunday (bracket here) was the inevitable Gonzaga, but the Bulldogs were a modest No. 8 seed in the West, a comedown from No. 1 a year earlier.

Washington and Washington State this season were never in the hunt and Seattle University is still not to be taken seriously after five years of Division I.

Late Sunday afternoon, the Huskies absorbed a final insult when the NIT deemed their 17-15 record unworthy of their 32-team tourney of also-rans, although the NIT picked Pac-12 brethren Cal (19-13) and Utah (21-11).

Coach Lorenzo Romar said earlier that UW would not accept a bid from the third-tier College Basketball Invitational, apparently grasping for any fig leaf to save a little dignity. Washington had been in six consecutive postseason tournaments: CBI (2008), three NCAAs (2009-11) and two NITs (2012-13).

I mean, New Mexico and New Mexico State are in the NCAA tourney. More people work at Amazon in South Lake Union in Seattle than live in the entire state.

North Dakota State is in. Delaware is in. Fergawdsakes, Cal Poly is in the NCAA tourney, and they won 13 games and lost 19.

I’d recommend that if you’re a local hoops fan in a quest for a rooting interest and can’t quite deal with another smirk from Zags coach Mark Few, you may as well go with the Mustangs of Cal Poly.

Besides the magnum-underdog cuteness of a team with a losing record, the Big West Conference tournament champion is coached by Joe Callero, who qualifies as a Seattle homie.

An Enumclaw native and a 1986 Central Washington University grad, Callero coached at Sumner High School, Highline Community College and the University of Puget Sound in Tacoma before getting the Seattle University coaching job in 2001 when the school was still Division II.

He was cashiered in favor of Cameron Dollar, the University of Washington assistant who had nice run alongside Romar. But there has yet to be an uptick for the little Jesuit school on Madison.

Callero’s fifth season at Cal Poly didn’t seem like much. The ‘Stangs lost nine of their final 11 regular-season games to finish seventh (6-10, 10-19) in the nine-team conference. But Thursday at the Honda Center in Anaheim, Cal Poly opened the Big West tourney by routing UC Santa Barbara 69-38, the fewest points allowed in the tournament in 13 years.

Friday night, they beat regular-season champ UC Irvine 61-58. In the title match Saturday night, Cal Poly edged Cal State-Northridge and its first-year head coach, Reggie Theus, 61-59 to win the conference’s automatic entry to the NCAA — first in the school’s 20-year history in Division One. The ‘Stangs were the lowest seed to win the tourney in its 39-year annals.

If that isn’t enough Cinderella for you, let’s throw in another local angle —  Callero’s associate head coach is Paul Fortier, an eight-year assistant to Romar and former star Huskies player from 1983-86 who was fired last year.

So there’s at least a couple of local guys in the NCAA tourney, even if they had to get out of Seattle to get there.

Cal Poly qualified for what used to be called a play-in game — now called the first round or First Four — Wednesday in Dayton, OH., against fellow 16th seed Texas Southern (19-14) of Houston, which earned the Southwestern Athletic Conference’s automatic bid by winning the conference tournament Saturday with a 78-73 victory over Prairie View.

Should Cal Poly prevail Wednesday, it advances to the Midwest Region’s second round Friday in St. Louis, where the Mustangs would face No. 1 seed Wichita State (34-0), the nation’s only unbeaten team.

Let’s not get ahead of ourselves. Now that we’re all Poly-nesians, let’s just enjoy the week’s hype, intrigue and national attention. Pretend it’s a Seahawks postseason game.

Otherwise, we’re stuck with the Zags, and another loss in the first round (No. 9 Oklahoma State) or certainly the second round (No. 1 Arizona). It’s fun to see the smirk disappear, but March Sadness gets old after 15 tourneys in a row.