Would you spend $25 on a giant corn dog?

The Arizona D-Backs are crossing the $25 hot-dog barrier with the launch of the “D-Bat Dog.” Would you spend $25 for a corn dog? Or eat one? Vote here. 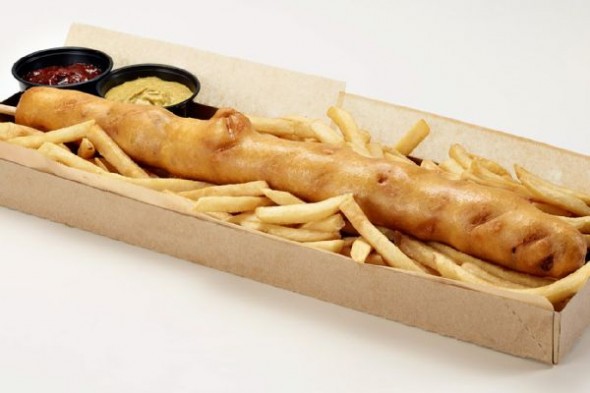 Nearly 30 years ago, relief pitcher Rich (Goose) Gossage (a Mariner in 1994) agreed to donate $25,000 to charity and issue a public apology in order to escape a more serious fine for numerous acts of insubordination while a member of the San Diego Padres. One of Gossage’s main transgressions: He accused Mrs. Ray Kroc, widow of the former team owner, who also founded McDonald’s, of “poisoning the world with her hamburgers.”

Wonder how Gossage – or Wolfgang Puck and Rachael Ray, for that matter – would react to the $25 corn dog that the Arizona Diamondbacks plan to sell at Chase Field this season.

According to a Diamondbacks press release, the $25 corn dog – officially, the “D-Bat Dog” — is 18 inches long and stuffed with cheddar cheese, jalapenos and bacon, and served with a side of fries.

“This is really about providing our fans with new options each year, and in the case of some of our larger items, it’s really about sharing with the family,” team president and CEO Derrick Hall said. “We don’t have any expectations for the D-Bat, but we’ll look forward to seeing if it becomes popular with our fans. Every night for us is a successful night because we offer the most affordable food prices in all of baseball.”

For those who can’t afford to fork over 25 bucks for a D-Bat Dog (or have the good sense not to), the Diamondbacks have alternatives. One is the foot-long “Venom Dog,” which is loaded with habanero sausage topped with black beans, guacamole, pico de gallo and sour cream. It goes for $10.

Even less expensive is the Sonoran Dog, introduced last year for $7. It’s a hot dog wrapped in mesquite-smoked bacon with pico, beans and mayo with an Orangina drink.

The Diamondbacks are not the first major league club to cross the $25 hot-dog barrier. Two years ago, the Texas Rangers brought out the “Broomstick,” a two-foot dog engulfed in chili, nacho cheese, jalapenos and onions: $26.

Beyond the $25 price for the D-Bat Dog is the issue of exactly what fans will be getting for their money. Corn dogs are typically made from beef or the leftover scraps of a pig, coated in a thick layer of cornmeal batter, deep fried and served on a stick. That right there disqualifies corn dogs from the list of “heart healthy” foods.

According to USDA statistics, the average corn dog (175 g) is about 40 percent salt, 34 percent protein, 29 percent fat, 26 percent cholesterol (the bad kind) and contains little in the way of vitamins. The percentages would rise in the case of the D-Bat Dog due to the cheddar cheese and bacon, turning your bloodstream into a “Mercer Mess.”

Do you really want to devour that?

Sure, corn dogs are flavorful, but to “burn off” just 200 calories of the average, 460-calorie dog, you’d have to swim for more than 30 minutes or walk for 50, according to caloriegallery.com. Which obviously means that to burn off a D-Bat Dog, you’d have to swim the English Channel or summit K-2.

So, with National Corndog Day coming up Saturday, here’s the question: