Dempsey’s suspension was deserved, but the retaliation came from the league’s most-fouled player. In a World Cup year, does MLS care enough to do something? 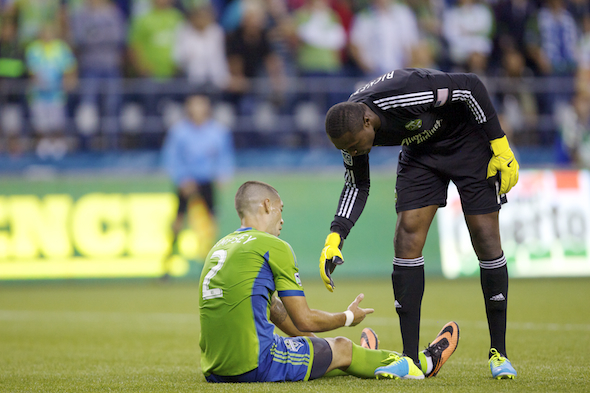 Pulling together a soccer team on the seasonal fly appears a difficult task, the Sounders’ 2013 debacle being Exhibit A. They’re doing it again in 2014, an awkwardness compounded by a World Cup year when, for the first time, Seattle players — along with players from other MLS teams in notable numbers — are called to training as well as Brazil “for club and country,” the marketing phrase deployed to help diminish the discontinuity.

But then to have the star player and U.S. National Team captain go schoolyard knucklehead and get suspended for two games, well, the word exasperation doesn’t quite cover it. “El Stupido” gets closer.

For a guy who hasn’t fit well into the Sounders’ scheme, due in large part to injury, his late arrival and steady national-team obligations, Dempsey’s loss for the match Sunday in Montreal and next week at home against Columbus, for an impulsive nut shot to an opponent, is the acme of foolishness.

That’s two games lost to further team development, maybe more. Dempsey can come back for the April 5 game in Portland, but he’ll likely receive a national callup when the U.S. team faces Mexico April 2 in Glendale, AZ. Who knows if he’ll be game-ready for the Timbers and their Kam Chancellor-style of play?

Dempsey claimed his smack of Toronto’s Mark Bloom during a 40th-minute stoppage of play last Saturday was unintentional. Obviously, the MLS office wasn’t buying it, creating another setback for Seattle’s intense attempt at remaking a roster around Dempsey capable of a championship.

Dempsey is the most fouled player in the league since his Aug. 10 debut, according to MLS’s own stats. Everybody knows it’s not random. Opponents all seem in agreement that regularly laying bone on him will slow, distract and provoke. It’s not surprising Dempsey felt a compulsion to retaliate.

As comedian Chris Rock says, I don’t condone it, but I get it.

Another guy who gets it is Jurgen Klinsmann, the USMNT coach who lashed out Friday upon hearing of the two-game suspension.

“A two-game suspension for that moment seems very harsh, and it comes at a very bad time for us as it throws him out of a rhythm before the game against Mexico,” Klinsmann told reporters. “It’s very disappointing to see Clint be the only person punished from this game. There is a foul against him in the sixth minute that should have been a red card. The persistent fouling continued throughout the game, and he’s getting punished for a reaction following all those fouls.

“Yes, he made a mistake, but if opponents don’t get penalized for consistently fouling, it only encourages them to continue that approach.”

Actually, Dempsey hasn’t been in a rhythm since he came back to the U.S. last summer. The man has played on four teams in less than year — Tottenham, Seattle, USMNT and Fulham. Given the year-to-year changes on the Sounders, it’s more like five.

Nor is Klinsmann much concerned with the consequences to the Sounders. It’s not his job. But the Dump-a-Demp tactic has him sweating the loss of his star before the World Cup.

The Sounders’ record for most single-game fouls by an opponent was 22. Each of the first two games this season had 25. Certainly, the hire of replacement refs during a labor dispute was a factor. Coaches and players didn’t seem to complain much, but that may have been attributable to word-of-mouth warnings from the league against criticism, to help create leverage that brought an end to the lockout Wednesday.

But the Dempsey abuse began last year with his debut, not with the temp officials. Mauling a premier player is hardly a new tactic, but the cumulative poundings not only diminish a star player, it feeds into the stereotype of the MLS as a second-tier league that compensates for its lack of top talent with brutish play.

Dempsey invoked the fan-dismay card Saturday after the game.

“I think everybody was getting frustrated,” he said of the 50 fouls. “I think from a fan’s perspective, it’s not fun to watch a game with that many stoppages, and also for the spectators at home. When you see it just being stop-start, stop-start, foul-foul-foul, it’s definitely frustrating for everybody.”

Dempsey erred in taking justice into his, um, own hands. But the inability to control and create an honest contest is something the league has been working at its entire 19 years, with less-than-modest success. In a World Cup year more dependent than ever on MLS players, it is time to address Dump-a-Demp with more than an arched eyebrow.