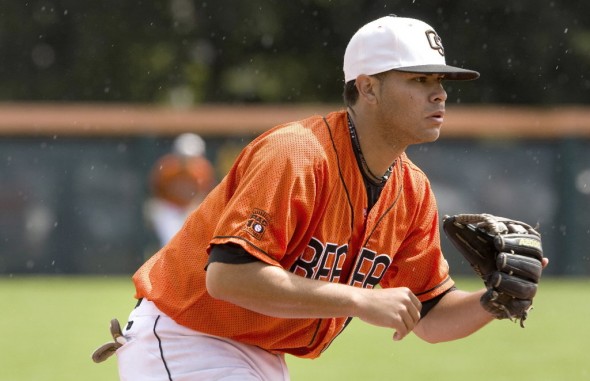 Outfielder Stefen Romero, who played last season in Tacoma and starred at Oregon State, has all but locked up a roster spot with the Mariners. /  Oregon State University

In the final full weekend of Cactus League, a pair of unlikely 20-somethings inched closer to securing their spots on the Mariners opening day, 25-man roster.

Outfielder Stefen Romero, the organization’s 2012 Minor League Player of the Year, hit a walk-off, three-run home run Sunday in Seattle’s 6-4 win against the Athletics in Peoria. Saturday, Cuban left-handed pitcher Roenis Elias gave up four hits and two runs in 5.1 innings against the Rockies but earned a no-decision in Seattle’s 4-3 loss.

In extended spring training auditions, both have seized chances when players who began the spring ahead of them on the depth chart sustained injuries.

“He threw the ball extremely well,” manager Lloyd McClendon said of Elias Saturday. “He just keeps going out there and keeps doing good. He certainly has made a statement for himself.”

Corey Hart’s ongoing battle with lower back and forearm stiffness helped Romero, who figures to see extended time in right field this season. In 19 games entering Monday, Romero is hitting .283/.298/.630 with a .928 OPS and three home runs in 46 at-bats. He also adds much-needed speed and arm strength to an outfield that in 2013 finished last in defensive runs saved (-70) and UZR (-58.5), an advanced stat that measures a player’s range, per FanGraphs.com.

If productive offensively, Romero could be the right-handed presence needed in a left-handed dominant Mariners’ lineup. Last season in Tacoma, the Oregon State product batted .277/.331/.448, including 11 home runs, 74 RBIs and a .779 OPS in 93 games.

Romero’s big-league roster spot was all but clinched Sunday when McClendon admitted Hart will begin the season as designated hitter. In December, the club signed the free agent to a one-year, $6 million deal, including performance-based incentives that could earn him up to $13 million. Before spring training, McClendon outlined a best-case scenario where Hart plays 145 games in right field.

The projection seemed optimistic, given that Hart, who turned 32 Monday, sat out 2013 recovering from major surgeries on both knees.

Hart missed the last three games with forearm and biceps tightness and wasn’t in the lineup for Monday’s matinee against the White Sox. In 12 Cactus League games, he is five of 35 (.143) and has no home runs. However, he is expected to return before Seattle opens the season March 31 against the Angels.

“His at-bats are fine,” McClendon said of Hart.

But his health problems, minor or not, makes the outfield more reliant on Romero and center fielder Abraham Almonte.

Given the chance to become the leadoff hitter, Almonte hasn’t righted himself. He entered Monday 9 for 61 (.148) with 10 strikeouts, five walks and an on-base percentage barely north of the Mendoza Line (.209). Yet, McClendon throughout spring has touted his speed and the flexibility he brings as a switch-hitter at the top of the lineup.

If Almonte breaks camp with the Mariners, the outfield won’t be as slow as last season (see Raul Ibanez, Mike Morse) or as slow it was thought to be back in February (see Corey Hart, Logan Morrison).

At 6-foot-3, 245 pounds and coming off knee injuries the past two seasons, Morrison is best-suited at his natural DH/first base spot. Left fielder Dustin Ackley is enjoying a torrid spring and Michael Saunders will start the regular season in center or right. That leaves Almonte and Romero as clear favorites to join the 25-man roster as third and fourth outfielders.

As for Elias: Spring training injuries to pitchers Hisashi Iwakuma (strained middle finger) and Taijaun Walker (inflammation in shoulder) helped his bid. So has the recent plunge of pitchers Scott Baker and Blake Beavan. Baker gave up six runs, seven hits and six walks (!) Saturday in a split-squad game.

Late Monday, Baker was granted his release after the club offered him a spot on the Rainiers, according to multiple reports.

RT @shannondrayer: #Mariners offered Scott Baker a spot on AAA and he declined. He has been released per his request.

Beavan had a similar case of the Mondays. He was lit up for five runs in the first two innings of Monday’s 7-6 loss to the White Sox. His final line: 5.1 innings, seven hits, seven runs and three strikeouts, which raised his ERA to 6.46.

Even with Iwakuma and Walker out for most of April, both might have pitched their way out of the rotation.

Meanwhile, Elias has been the talk of camp.

“I don’t have any idea what my chances are,” Elias said Saturday, playing coy through the Mariners’ interpreter. “I just come in and do my work and it’s up to them to make that decision.”

At the very least, he’s made that decision much harder.

Three prized Mariners pitchers are intensifying their rehabilitation programs, though all are likely a month away from returning.

Walker, who entered the season as the expected No. 3 starter before shoulder soreness sidelined him in late February, made his much-anticipated spring debut Saturday in a minor-league game against El Paso.

In one inning, he threw fifteen pitches and reached his typical velocity — between 93-96 mph, according to The News Tribune’s Bob Dutton — but yielded a run and two hits. Afterward, he returned to the bullpen and threw 15 more pitches.

Stephen Pryor, who missed most of last season after ripping a muscle in his back, didn’t reach his typical velocity (upper-90’s) but completed a 1-2-3 inning and was in the lower 90s in his spring debut. He used a fastball, change-up and slider, according to Dutton.

Iwakuma played a short game of catch (with a baseball) before Monday’s game and reported no ill effects from the finger he injured a few weeks before the start of spring training when he fell backward off a mound and got his hand caught in netting.

Barring a setback, Iwakuma and Walker are expected back by the end of April while no definitive timetable has been set for Pryor’s return. The one certainty?

All are expected to begin the season on the disabled list.