Jared Allen took the weekend to mull an offer from the Seattle Seahawks. According to coach Pete Carroll, “it’s a big decision,” and there is no word yet. 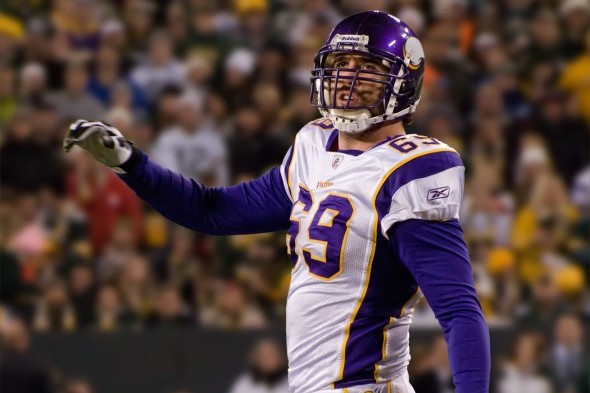 Jared Allen has 128.5 sacks during his NFL career, including 85.5 over the last six seasons. / Wiki Commons

After free agent DE Jared Allen finished his second bargaining session with the Seahawks late last week and left town without a contract, his agent, Ken Harris, said  Allen would mull over Seattle’s offer during the weekend and then make his decision. But the weekend came and went no word has come from Allen or Harris, a subject coach Pete Carroll addressed Monday during an interview on Sirius XM Radio.

“No, we don’t have anything right now,” Carroll said, speaking from the NFL owners’ meetings in Orlando. “It’s a big business decision for him. We also have a lot of work to do on our own roster. We’re very excited about extending players and stuff like that. So we have a lot of concerns and nothing is really easy. We can’t move as quickly as everybody would like.”

This, as Carroll said, is a big decision for Allen, who is looking at signing (or not) the final NFL contract of his career.

Allen has several options, including to sign with Seattle at the price the Seahawks want to pay; sign with the Dallas Cowboys, who inked Henry Melton (not likely); sign with a third team (Harris said Allen was weighing three offers); or call it a career, which Allen, 32 next month, said he might do regardless of offers.

With 128.5 career sacks, 85.5 in the last six years, Allen believes he’s worth DeMarcus Ware money (3 years, $30 million). Even if the Seahawks agreed, they do not have Ware money available within their cap budget to pay Allen or any other free agent. The best they can offer Allen, aside from a a relatively paltry few million, is a legitimate shot at winning a Super Bowl ring.

Allen, who has no financial worries after receiving a $15.5 million signing bonus in 2008 (unless he’s squandered the wad), has another option. If the current offers are not at the level he wants — and they aren’t, or he would have signed — he can wait until late summer to see if his market value improves.

With the Seahawks having cut Chris Clemons and Red Bryant to clear cap space, Allen would be a nice addition. He recorded 11.5 sacks last season. But for the Seahawks, given their relative lack of cap space and the tasks facing them, Allen is more luxury than need.

Their history shows that they will not mortgage the future of their cap for the sake of any player, which is why they have seen 11 players depart, including eight in free agency, since Feb. 2, when they thrashed the Denver Broncos 43-8  in the Super Bowl.

A pay-as-you-go franchise, a good thing (for a “bad thing,” check out the Dallas Cowboys under Jerry Jones), the Seahawks will, over the next year, need to sign to long-term extensions FS Earl Thomas, CB Richard Sherman and probably LB K.J. Wright. QB Russell Wilson, whose four-year rookie contract expires after 2015, will also come in for an expensive extension in the next year or so.

Those are higher priorities than Allen, even if he is a potential Hall of Famer. If Allen doesn’t sign, the Seahawks can use the money to work on Thomas and Sherman. Even if Allen does sign, the portion of guaranteed money is unlikely to go beyond one year.

Allen also has to decide whether he will accept a reduced role. He’s used to playing more than 90 percent of his team’s snaps. But no Seahawks D-lineman saw more than 57 percent of the action in 2013. From a standpoint of career preservation, that should be good. But for highly competitive types such as Allen, he may want the the opportunities for reasons of stats and ego.