For the Mariners, April is the telltale month 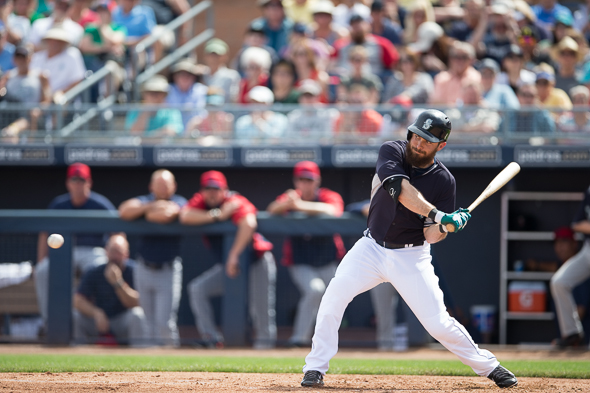 Dustin Ackley has had a strong spring training and needs to carry that into the regular season. / Drew McKenzie, Sportspress Northwest

When the Mariners wound up 2013 spring training with a 22-11 record and a Cactus League-record 58 home runs, hopes ran high among local hardball fans that the positive momentum would sustain into the regular season. It didn’t, of course. The Mariners went 12-17 in April en route to a final mark of 71-91, their sixth season in a decade with 90-plus losses.

The Mariners are finishing another strong spring (17-11-3) in terms of record, but the larger point is that they have not had a winning month of April since 2009, when they went 13-9 and finished with a record of 85-77.

The importance of a quality start in April cannot be emphasized enough, the Mariners serving as nearly perfect example of what happens to teams, especially in the AL West, that get off to sluggish starts.

Since 1994, when baseball sub-divided into three divisions, 41 editions of the Mariners, Angels, Rangers and Athletics have combined for losing records in March/April. Not counted is April 1995, when the season did not launch until the end of that month due to the previous season’s player strike (each of the AL West clubs played only a handful of April games that year), nor is included Houston’s one season (2013) in the division.

Of those 41 losing March/Aprils suffered by the four AL West entries, 30 resulted (73.1 percent), in losing (sub-.500) seasons, meaning that just 11 clubs had a losing record in April, but a winning mark at the end of September.

Since 1994, April has been the most telling month as to how the Mariners are going to perform throughout the season. Consider:

In the AL West, the Angels (5) and Athletics (4) have combined for nine losing March/Aprils, but rebounded to end the season above .500. Oakland had the most remarkable turnaround, going 8-17 in March/April of 2001, but finishing with 102 victories compared to Seattle’s record 116.

The following are the only AL West clubs that started out losing in March/April, then went on to finish with a winning record. Note that of the 11 teams that recovered to end on a positive note, only four wound up in the postseason, and only two went past the American League Division Series.

A winning record in April is no guarantee the Mariners will make the playoffs. In franchise history, the Mariners have produced 10 winning first months. They reached the postseason in only three seasons (1997, 2000, 2001). But a losing record out of the blocks almost guarantees no postseason.

This season, the tattered state of the rotation compromises Seattle’s chance of producing a winning April. No. 2 starter Hisashi Iwakuma, who finished third in Cy Young voting last year, will start the year on the disabled list and likely won’t return until late April or early May.

Taijuan Walker, a rotation candidate when spring training commenced, reported with a sore shoulder and was shut down for a week, ailing from inflammation of his bursa. He’s throwing again, reportedly pain free, but will remain on the shelf at least until the middle of the month.

Suddenly, Erasmo Ramirez is the No. 2 starter with James Paxton, 3-0, 1.50 ERA last year, at No. 3. That leaves the back end of the rotation to rookie Roenis Elias and probably newcomer Chris Young, signed off the discard heap Thursday.

The Mariners had Randy Wolf ticketed for one of those jobs until he abruptly walked away from the team Tuesday, correctly balking at the team’s request to sign a 45-day clause granting the club the power to release him in that span at a pro-rated portion of his guaranteed salary.

Advance-consent clauses are not unprecedented, but Wolf’s deal called for him to make $1 million guaranteed if he made the roster, which he did, which is why the Mariners absorbed a deserved skewering when Wolf walked.

Not that they lost much. The 37-year-old hasn’t pitched since 2012 when he went 5-10, and hasn’t had more wins than losses in a season since 2011. But his departure left the club in a bind, thus the quick signing of Young.

But the club remains in a bind. According to manager Lloyd McClendon, Ramirez has “yet to learn how to throw quality strikes.” Elias, 25, makes a jump from AA (Jackson), a leap Brandon Maurer couldn’t do last year. Young spent 2013 in the minors rehabbing from a third career shoulder surgery. Behind that trio are Blake Beavan and Hector Noesi, both of whom have proved to be sensationally inadequate.

Iwakuma and Walker will return for the final five months. But it’s always the first month that points to the road the Mariners will take.