Spurned by UW and Gonzaga, University of Virginia shooting guard Joe Harris was ready to go to WSU before then-coach Tony Bennett packed up and left for the ACC. 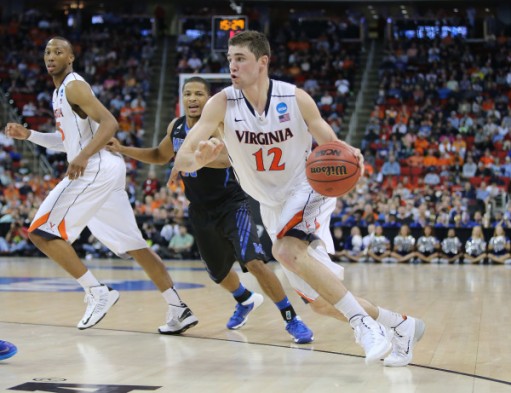 Joe Harris averaged 14.8 points per game in the postseason. / University of Virginia Athletics

When Joe Harris and No. 1 seed Virginia face No. 4 seed Michigan State at Madison Square Garden Friday night in the Sweet 16 round of the NCAA tournament, a lot of people will probably pick the Cavaliers to lose. The favored Spartans are actually giving two points to the ACC regular season and tournament champion, according to gambling site Bovada.com.

The last time a favored No. 4 beat a No. 1 was 2005, when Louisville upset the University of Washington.

The underdog role is just fine with Harris, a 6-foot-6 senior shooting guard from Chelan, the Central Washington resort burg (pop. 3,942). Right up until he became one of the most efficient scorers in the country at Virginia, he wasn’t any major program’s favorite.

Consider: Harris was a fan of Huskies football and Gonzaga basketball growing up. He set a Washington Class A career scoring record (2,399 points) playing for his dad, Joe Harris, at Chelan High School. In 2010, he was named “Mr. Basketball” by the Washington Interscholastic Basketball Coaches Association and the Gatorade Washington Boys Basketball Player of the Year. He was the Class A State Player of the Year in 2009 and 2010.

Yet, the offers were slow to come. Following his junior season in 2008-09, neither the Huskies nor the Zags extended a scholarship.

Along came Tony Bennett, then in his third year as head coach at Washington State. Bennett earned national recognition for recruiting unheralded players to the Palouse and seamlessly plugging them into the pack-line, man-to-man defense his father, Dick Bennett, made famous at the University of Wisconsin.

“I thought I was going to play for him at Washington State,” Harris told the Roanoke Times Wednesday. “The story I usually tell people is, he was in my high school gym, watching open gym and talking about making things official.”

In April 2009, less than a week after Harris believed he was going to WSU, Bennett accepted the head coaching job at the University of Virginia. About a month later, Harris took a visit to Charlottesville and was impressed by newly remodeled John Paul Jones Arena and the school’s academic prestige.

“I said, ‘I know we’re far away; I know how important your family is, (but) come to our camp,’ ” Bennett told the Roanoke Times. “I knew if I could get him here to see our facilities, that was going to have a ‘wow’ effect.’ ”

When Bennett honored the scholarship, Harris didn’t hesitate to attend an ACC school on the other side of the country, thousands of miles from his family of six.

“He said that this is a place that’s dying to be a basketball school. People here are just waiting for this team to get good and they have some history and it was something that he could establish on his own,” Harris told the Associated Press. “It’s very enticing to a young kid to tell him, ‘You could be the start of changing the program around and be the foundation to what Virginia basketball could be in the future.'”

Well, that, and his only other offers were from San Diego, Portland and Portland State, according to Scout.com.

Five years later, Harris and the Cavaliers (30-6, 16-2 ACC) are winners of 21 of their last 23 games and owners of the fifth-best adjusted defensive efficiency in the country, according to kenpom.com. This season, they beat Duke in the ACC tournament title game, whipped Syracuse at home on senior night and had a 13-game ACC winning streak to capture Virginia’s first conference title since 1976.

Harris, second on the team with 11.8 points per game, early in the year agreed to take a lesser scoring role — he averaged 16.3 points per game during a first-team ACC  junior season — after Virginia dropped non-conference games to VCU, Wisconsin, University of Wisconsin-Green Bay and Tennessee.

At the urging of Bennett, he’s been more aggressive in the postseason, averaging 14.8 points during a five-game winning streak.

With a smooth jump shot and more up-fakes than is socially acceptable in a game predicated on verticality, Harris is an easy player to like. His 225-pound physique helps him finish well in the paint, go back-to-the-basket and shoot a turnaround or shed defenders when rubbing off screens. He uses his left hand about as effectively as his right.

Earlier this season, mock drafts, at best, predicted him a second-round choice in the NBA draft, some citing a lack of athleticism and below-average foot speed.

Beating Michigan State (28-8 overall), a perennial Final Four contender, in Madison Square Garden could certainly boost his stock. It might even prove a few experts wrong.

Wouldn’t be the first time.