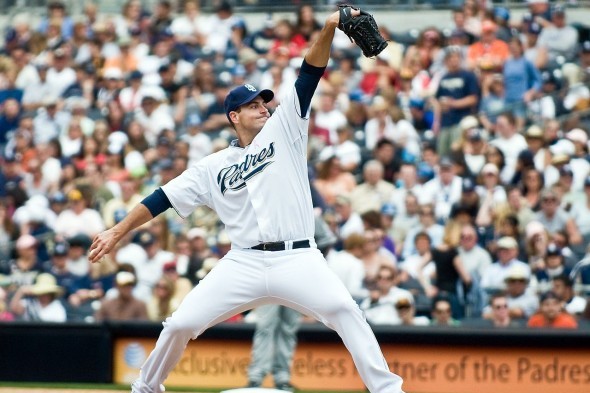 Chris Young will join the Mariners rotation mix starting Friday. He will receive a reported $1.25 million guaranteed and can add $3.4 million in bonuses. / Wiki Commons

To add to their depleted rotation, the Mariners Wednesday signed free-agent RHP Chris Young, who spent most of spring training with the Washington Nationals, to a major league contract. To make room for Young on the MLB roster, the Mariners designated LHP Bobby LaFromboise for assignment. Seattle now has 10 days to trade, release or outright LaFromboise to the minor leagues.

Young will join the Mariners Friday when they resume spring training with a game against the Colorado Rockies. According to multiple reports, Young will receive a guaranteed $1.25 million. He can receive an additional $3.4 million in bonuses, suggesting that the Mariners do not view him as a mere stop-gap while Hisashi Iwakuma and Taijuan Walker recover from injuries.

The 34-year-old Young posted a 3.48 ERA (4 ER, 10.1 IP) with nine strikeouts in four games including two starts for the Nationals this spring. Washington released Young earlier this week.

He began his professional career in 2000 in the Pittsburgh Pirates organization before being traded to the Montreal Expos before the 2003 season.

Young spent the entire 2013 season in the Nationals minor league system, posting a record of 1-2 with a 6.81 ERA (28 ER, 37.0 IP) with 21 strikeouts in nine appearances, all starts with AAA Syracuse, short-season Auburn and the Gulf Coast League Nationals.

Young last had an extended stint in the majors in 2012, when he went 4-9, 4.15 ERA in 20 starts for the Mets.
He earned a B.A. in politics from Princeton where he played baseball and two seasons of basketball and was named the Ivy League Rookie of the Year in both sports in 1999.