After a story broke alleging gang affiliations, DeSean Jackson was cut Friday by the Eagles. Pete Carroll goes back a decade with Jackson. Do Seahawks have the money, guts? 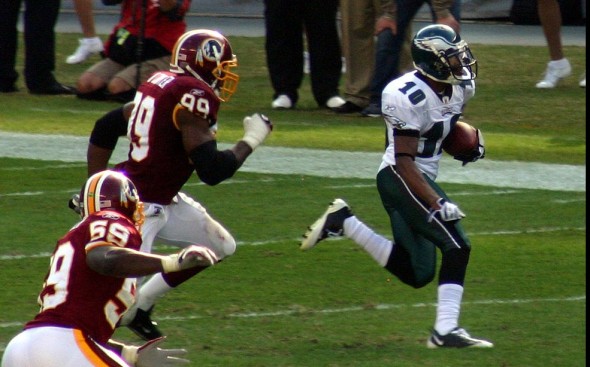 SeSean Jackson is a free agent but is packing heavy baggage. / Wiki Commons

Pete Carroll has developed a reputation, largely deserved, as a modern-day Father Flanagan,  providing at his Renton Hostel for Wayward Youth some shelter from the storm. But with the sudden availability Friday of one of the NFL’s premier talents, WR DeSean Jackson of Philadelphia, Seahawks fans should keep three things in mind:

Then again, there is this tweet Jackson sent out March 21 that includes a photo from 2005, presumably from the Jackson family living room in Long Beach, CA.:

We know the bromide about one picture being worth a thousand words. And we know Carroll can deliver a thousand words faster than any coach in NFL history. But in the absence of any of those words to explain his personnel desires, we can only speculate from various clues about the likelihood of Jackson joining the Seahawks:

And we haven’t even talked yet about the Seahawks room under the salary cap.

According to overthecap.com, only seven teams have more room under the cap than the Seahawks’ $15.2 million. But a lot of teams could come closer to matching Jackson’s $10 million salary that he just lost when the Eagles cut him Friday (he had $30 million and three years left on his Eagles’ contract, none guaranteed), because they don’t have as many big, future deals pending as do the Seahawks.

But the Seahawks did plan to spend some money to re-hire WR Golden Tate, as well as sign free agent DE Jared Allen, neither of which worked out. It’s not clear what the offers were, although reports said Tate was in line for a $5 million average annual value over multiple years and DE Jared Allen was offered $12 million over two years.

So for the sake of discussion, let’s say the Seahawks could afford to pay Jackson, 27,  the average of what they offered Allen for one year, or Tate, 26, for multiple years: $5.5 million for 2014.

Not close to what he was making, but three weeks into free agency, many teams have spent most of their money, so Jackson inevitably will have lost ground in the marketplace, and might be down to a one-year, “prove it” deal.

All teams will be reluctant to offer him more than one year partly because of a story that broke Friday on nj.com alleging associations with with the Crips gang in Los Angeles. The story said Jackson had relationships with reputed Los Angeles street gang members who have been connected to two homicides since 2010, although he was accused of no crimes.

The story was released about a half-hour before the Eagles announced they were cutting Jackson. For several weeks, rumors circulated about a potential trade, despite the fact that Jackson had the best of his six pro seasons, with 82 catches, 1,332 yards and nine touchdowns for a 10-6 team that made the playoffs. The story’s sources claimed that the desire to get rid of him originally was because of bad attitude, an inconsistent work ethic, missed meetings and a lack of chemistry with first-year head coach Chip Kelly, formerly of the Oregon Ducks.

But once the Eagles became aware of the gang allegations about to be published, the decision was made to cut Jackson. A source told ESPN.com that the Eagles abandoned any trade because of fear that more news would be revealed that might leave the acquiring team suspicious of the Eagles’ failure to disclose.

After the story came out Friday, Jackson issued a statement through his agent denying any gang affiliation:

“First I would like to thank the Eagles organization, the Eagles fans and the city of Philadelphia for my time in Philly. I would also like to thank (former) coach Andy Reid for bringing me in.

“Secondly, I would like to address the misleading and unfounded reports that my release has anything to do with any affiliation that has been speculated surrounding the company I keep off of the field. I would like to make it very clear that I am not and never have been part of any gang. I am not a gang member, and to speculate and assume that I am involved in such activity off the field is reckless and irresponsible.

“I work very hard on and off the field and I am a good person with good values. I am proud of the accomplishments that I have made both on and off the field. I have worked tirelessly to give back to my community and have a positive impact on those in need. It is unfortunate that I now have to defend myself and my intentions. These reports are irresponsible and just not true. I look forward to working hard for my new team.”

The Seahawks have “traded for trouble” before, acquiring RB Marshawn Lynch from Buffalo and Harvin from Minnesota after the players squabbled with coaches or had off-field issues. But the gang connection is scary for the NFL in the wake of the shocking arrest last year of Hernandez, the star tight end of the Patriots, on murder charges. Investigators believe he had gang connections.

But Jackson has had other troubles. He is being sued by his former agent, Drew Rosenhaus, for $400,000 in unpaid fees. And in mid-January,  Jackson said his home was robbed of $250,000 in valuables.

Burdened with all this baggage, he is abruptly available. The Jets, Chiefs and Raiders reportedly are interested, but no pro coach has a longer history with him than Carroll, who lost the college recruiting battle to Cal, where Jackson teamed with Lynch. They share the same agent.

Now Carroll has a second chance at Jackson, a graduate of Long Beach Poly, a high school that sent four other players to the NFL through USC during Carroll’s time as Trojans coach.

Carroll knows Jackson’s background, the LA gang landscape and has Lynch’s endorsement as a coach, as well as a Super Bowl trophy. Carroll also has an expensive No. 1 receiver who will be the primary target for a team that throws less than any offense in the NFL.

Forced into near-dormancy by the salary cap during free agency, Carroll suddenly is upon the most provocative decision of his dramatic tenure in Seattle: After a good team and coach quit on a star player without compensation, can the Seahawks find room under the salary cap, on the roster, in the offense and the locker room for another wild-child game-breaker?

And you thought last season was compelling theater.