Smoak, Saunders, Ackley all at their due dates

1B Justin Smoak, OF Michael Saunders and OF Dustin Ackley have reached their major league due dates and need to start performing to their projections. 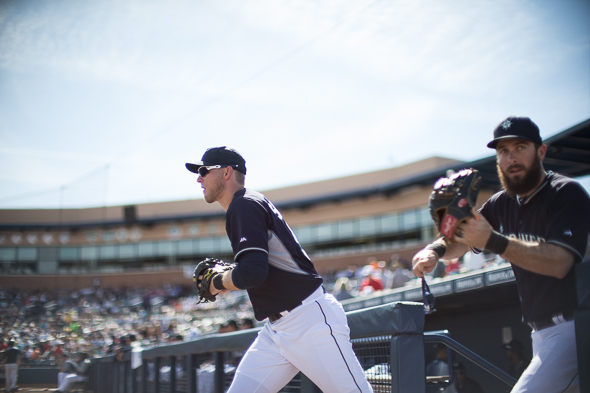 One year ago, with Eric Wedge orchestrating matters before he stink-bombed his way out of town, the Mariners had two starting pitchers – Felix Hernandez and Hisashi Iwakuma – finish in the top 10 in Cy Young voting, collaborating for a 26-16 record and 2.84 ERA, the lowest combined ERA by a pair of starting pitchers in franchise history.

The Mariners also ranked second in the major leagues with 188 home runs, up from 149 the previous year, and tied a club record with 10 players reaching double digits in long balls, including four with 20 or more. No team scored a higher percentage of its runs via the homer than Seattle (46 percent).

A team with that profile should have played .500 or better, perhaps much better. But the Mariners lost 91 games, finishing 25 back of Oakland in the AL West. They flubbed the season in part because of poor situational statistics – and will flub the upcoming one, which starts Monday night in Anaheim – if the numbers don’t improve.

Foremost was the fact that the Mariners continually came up lame with runners in scoring position, which even paid-to-be-positive club broadcaster Mike Blowers couldn’t help but harp on during last year’s telecasts. Their .228 batting average with RISP ranked 30th, ahead of only Minnesota’s .225 and the .218 posted by the Chicago Cubs.

In addition to an inability to take advantage of scoring opportunities, Mariners fielders produced an Ultimate Zone Rating of -73.0, the American League’s worst and a Dr. Strangeglove-like plummet from 2009 when, with the likes of Franklin Gutierrez, Adrian Beltre and Jack Wilson, Seattle’s UZR was 86.0, the best the website FanGraphs has recorded.

It all translated into 40 blown leads, 13 walk-off losses, 27 defeats in the opponents’ final at-bat, 15 extra-inning setbacks (franchise record) and a 19-29 record in one-run games. Those bleak numbers were more than enough to ensure no postseason for the 12th consecutive year.

Within the division, only the Houston Astros hit the finish line with a poorer record (51-111) than Seattle’s 71-91. But nine of Houston’s wins (17.6 percent) came at the expense of the Mariners (in the 19-game series, the Astros actually outscored the Mariners 91-81).

To re-gain credibility missing for a decade, the Mariners signed Robinson Cano, whose bat produced the 11th-best OPS in the majors over the last five years. Cano will be tasked with ensuring that his highly touted but disappointing younger teammates get on track. The Mariners hope that Cano can do by bringing a winning pedigree to the clubhouse.

Almost as soon as Cano arrived at spring training and took a cursory glance around, he implored the club to re-sign free agent Kendrys Morales, one of Seattle’s best hitters last year, and another free agent, RHP Ervin Santana. For obvious financial reasons after allocating $240 million over 10 years to Cano, the Mariners did neither after bringing in a pair with knee issues, DH Corey Hart and OF Logan Morrison.

Hart will hit somewhere behind Cano, but the former Brewer has appeared coated in rust as he’s tried to recover from knee surgery. In 38 spring at-bats, Hart managed five hits while striking out 18 times for a .132 average. Spring stats don’t amount to much, but if they did, Hart would have “Mariners” written all over him.

The Mariners have spent three years pumping propaganda to the effect that their collection of young stars will ultimately go supernova. No one argued that more forcefully than Wedge, in part due to his daily exposure to clubhouse microphones. But the company line became so tiresome, even to Wedge, that he reversed course when he abruptly severed ties left last summer.

“I’m tired of talking about that and sick of hearing about that,” Wedge said, fuming. “It’s time for these guys to produce consistently.”

Wedge’s replacement, Lloyd McClendon, doesn’t want take the youth road, either, as he explained when the Mariners broke camp Saturday in advance of the three-game series against the Angels.

Certainly 24-year-old shortstop Brad Miller (76 career games) and 23-year-old catcher Mike Zunino (20) hold promise and are not part of this conversation. But 27-year-old first baseman Justin Smoak, 27-year-old outfielder Michael Saunders and 26-year-old outfielder Dustin Ackley have reached their due dates. So far, all three have looked better wearing major league uniforms than they have playing in them.

Smoak is nearing his 2,000th (1,942) plate appearance and is at an age where he should already be a consistent contributor (which he hasn’t been), if not the All-Star candidate the Mariners thought he could become when they acquired him in 2010. But Smoak’s similarity scores, a tool provided by baseballreference.com, tell a different story.

Of the 10 players with stats most like Smoak’s through age 26, only former Mariner Tino Martinez ever went on to play at an All-Star level, Martinez reaching that status as a 27-year-old, Smoak’s age now, in 1995.

Last season, Smoak hit 20 home runs, including nine in August-September, one of his notorious teases. But he also batted .229/.184 in those months, hit .211 with men on base and .230 with runners poised to score. Smoak is a career .227 hitter through 486 games. It used to be in the big leagues that hitting  .227 was a ticket to the minors. But GM Jack Zduriencik has a ton, in dollars and political capital, invested in Smoak.

Saunders has played 475 games and has a career average of .224 after hitting .236 last season. So far, he hasn’t shown much as an outfielder, either.

McClendon made a good point early in spring training when, asked about Seattle’s young players, he took the opposite tack of the long-time company line, clearly a stalling tactic to keep Safeco Field at least half filled.

McClendon generalized, but he could have been referring to Mike Trout, at age 22 five years younger than Smoak and Saunders and four years younger than Ackley, who entered professional baseball 23 picks ahead of Trout in the 2009 draft.

Trout has already become baseball’s best player, or close to it. Starting Monday night in Anaheim, where Trout just received $144.5 million over six years for being good as well as young, we’ll start to find out whether, in Smoak, Saunders and Ackley, we have been watching Trout’s opposite — a trio of emerging journeymen who vastly underperformed their scouting reports.