As rumors swirl about coach Ken Bone’s successor, WSU AD Bill Moos said Monday on his radio show that he’ll announce the school’s next basketball coach in the next 48 hours. 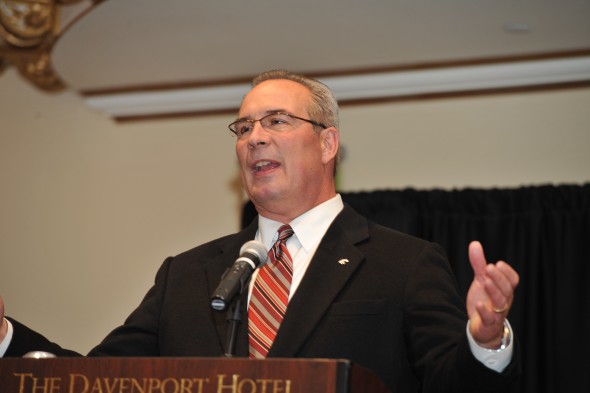 Contrary to The Spokesman-Review’s report, Bill Moos said that he didn’t fly to Boise over the weekend to meet with Broncos basketball coach Leon Rice. / WSU Athletics

Appearing Monday on his weekly radio show in Spokane, Washington State athletic director Bill Moos said he plans to announce the new Cougars basketball coach in the next two days.

“Well, I think we’re very close to making an announcement,” Moos told WSU football and basketball play-by-play broadcaster Bud Nameck. “I feel real good about things — not quite there yet, but it’s going to be here pretty soon, within a day or two. Maybe even sooner. I feel real good about it.”

During the season, Moos told multiple outlets that he kept a “short list” of candidates, all head coaches, in case he fired a coach or they left for another job. In a widely anticipated move, Moos fired Ken Bone March 18 after the Cougars finished the season 10-21 (3-15 Pac-12) and were eliminated in the first round of the Pac-10/12 tournament for the fifth consecutive year. WSU will pay Bone the $1.7 million owed on the remaining two years of his seven-year deal.

After the decision, Moos said via teleconference that he wouldn’t discuss the hiring process. He hinted Monday he is done interviewing candidates.

“I talked to everybody on the infamous short list that people are referring to. I had some very good candidates and again, hope to have an announcement out here shortly,” Moos said.

The Spokesman-Review reported Saturday that Moos and WSU president Elson Floyd flew to Boise over the weekend in hopes of persuading Rice, a WSU graduate and former Gonzaga assistant, to become the next Cougars coach. That afternoon, Boise State said Rice will receive a $100,000 raise for the 2014-15 season — to $596,573 — and a 3 percent salary increase in each subsequent year. His reworked contract also includes a clause that grants a five-year rollover extension every time the Broncos finish the season with 18 wins or make the NCAA tournament.

It’s unclear if Rice, 50, was offered WSU the job, or if he used an interview with Moos to leverage Boise State into giving him a raise.

Monday, Moos denied the report that he and President Floyd flew to Boise for a meeting with Rice.

“The only time I’ve been to Idaho in the last two weeks has been to Moscow (eight miles from the WSU campus), and that was to get my pants altered. I’ll leave it at that. I’m losing weight. First things first,” Moos quipped.

Less than an hour after Moos finished his radio show, KJR 950 AM radio personality Jason Puckett reported that a formal announcement is near.

Been told #WSU will announce new basketball coach today and a press conference will be Wednesday. Have no clue who the coach is. #GoCougs